When Sissy announced that she wanted a Cheetah Glam birthday party, I wasn’t surprised. She has been obsessed with cheetahs for the last several years, and glam is her middle name. But I wasn’t sure how to pull off her idea of cheetah glam. After a lot of planning, and consulting with the birthday girl (who has her own ideas), we came up with her dream Cheetah Glam Party — lots of animal print mixed with a good dose of sparkle and a lot of fun. 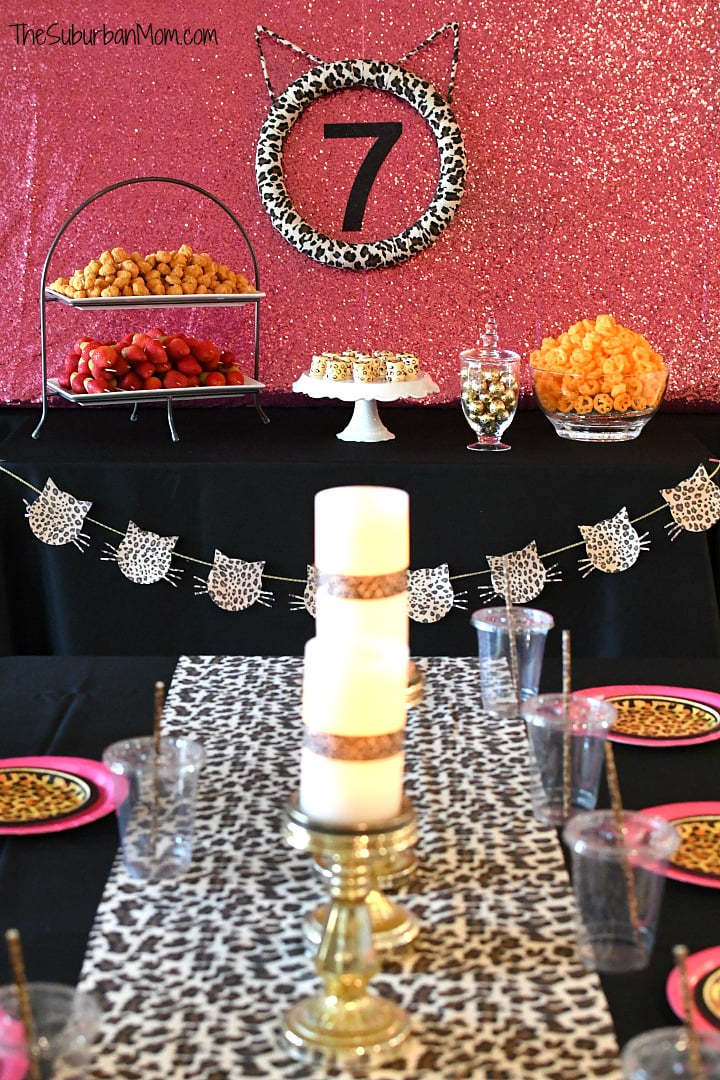 For the record, I am aware that the print used for the party is leopard print. However, my daughter is not. While she loves cheetahs, she sees leopard and cheetah spots as the same. In fact, when picking out choices for the party, she always picked leopard print over cheetah print. Soooooo… this party could easily be a leopard glam party as well. Either way, it turned out cute.

When I asked Sissy what she meant by Cheetah Glam, she told me “pink, black and cheetah print.” So that became the basis for all of my party planning. Starting with her invitation. 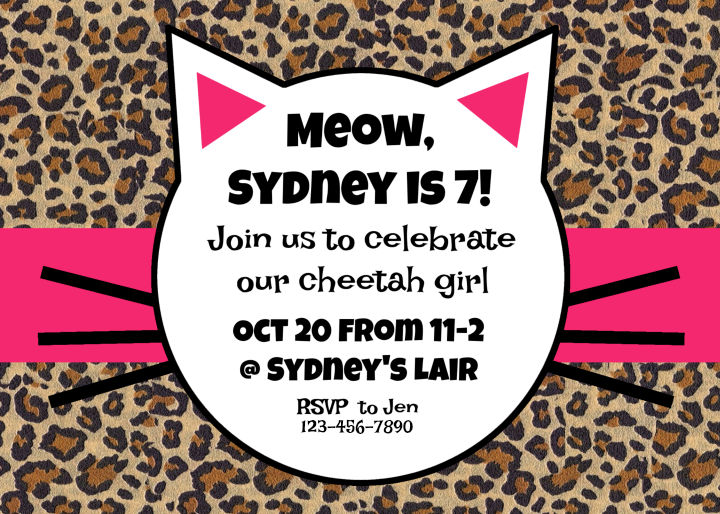 I was surprised how difficult it was to find leopard print party decorations. I really thought there would be tons of options, but there were not. I even had a hard time finding plates. But thanks to cheetah print paper and cheetah fabric, I was able to go all out cheetah. 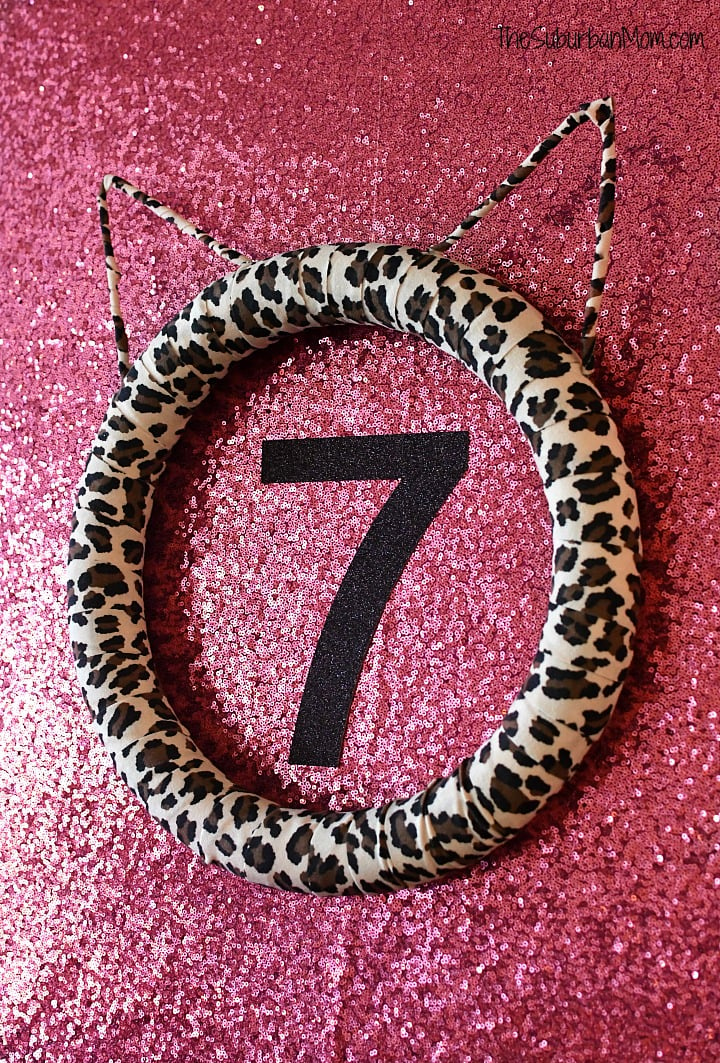 For the table runner, I bought six feet of cheetah print fabric from JoAnn’s. I chose a knit fabric that would look nice unfinished (no sewing!) and cut a piece 18 inches wide to lay on the table across the black tablecloth as a table runner. With unfinished edges, this is just about the easiest thing you can do to dress up a table. And thanks to a 40% off coupon, it only cost about $14 for all of the fabric, which I used throughout the party. 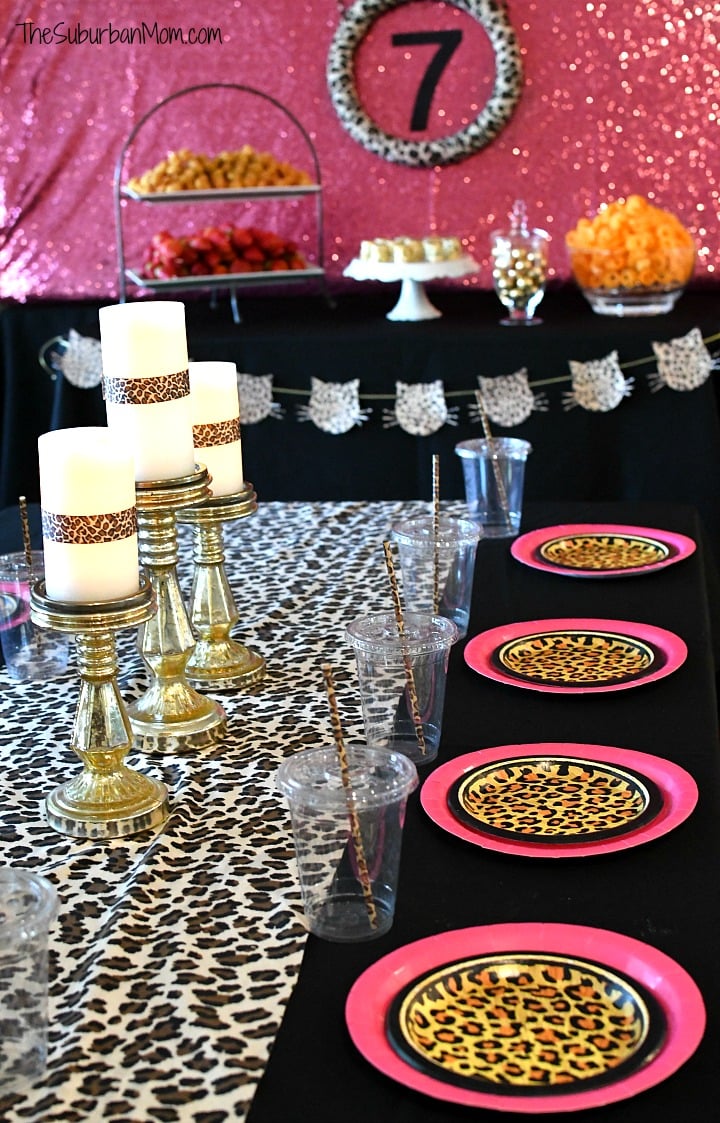 Like her big sister, Sissy loves cat ears headbands. That made the cheetah party favors easy — cheetah print cat ears for everyone! Thank goodness for Amazon. I found an inexpensive set of cat ears in colorful cheetah print that the birthday girl loved – HERE. Not only did the girls all look cute wearing them during the party, the birthday girl so happy after her party to report how many girls from the party wore their cat ears to school. She felt very cool.

To display the cat ears I wrapped a piece of fabric around a roll of paper towels and tucked the ends in. Super easy, and such a cute way to display. (I did the same thing for a Minnie Mouse party too.) 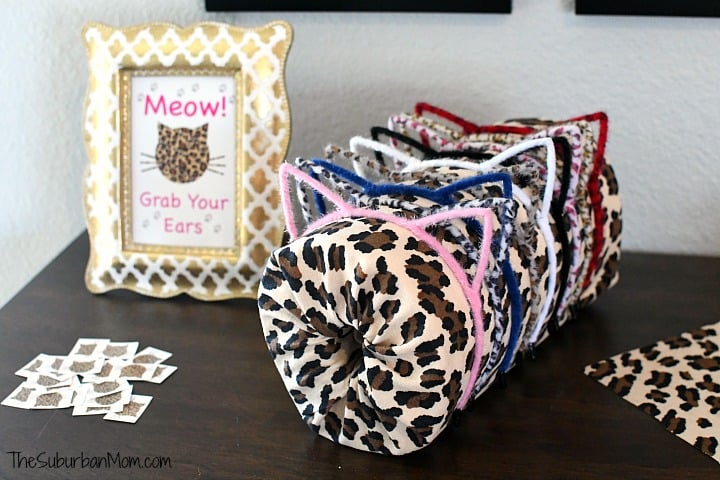 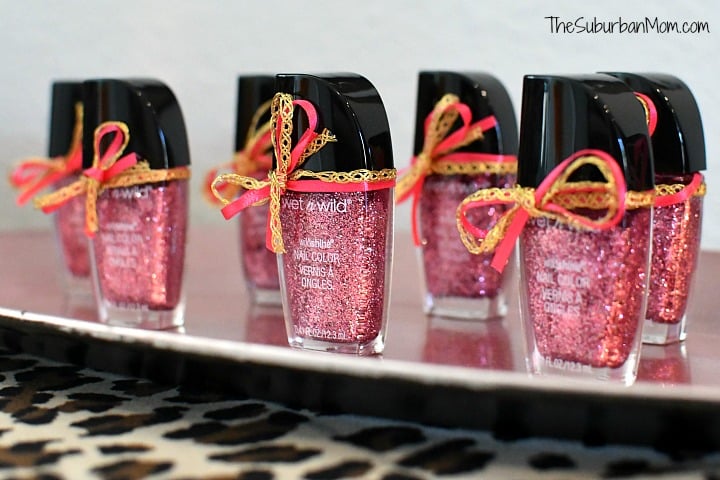 To complete the cheetah glam look, I also drew cat whiskers on the girls’ faces with black eyeliner. (Another dollar store purchase that was easy and cute.)

I repeated the cat silhouette throughout the party. On my gallery wall, I used my Silhouette machine to cut out the cat head from black paper and cheetah paper. Then I taped them directly to the glass to decorate our front entrance. 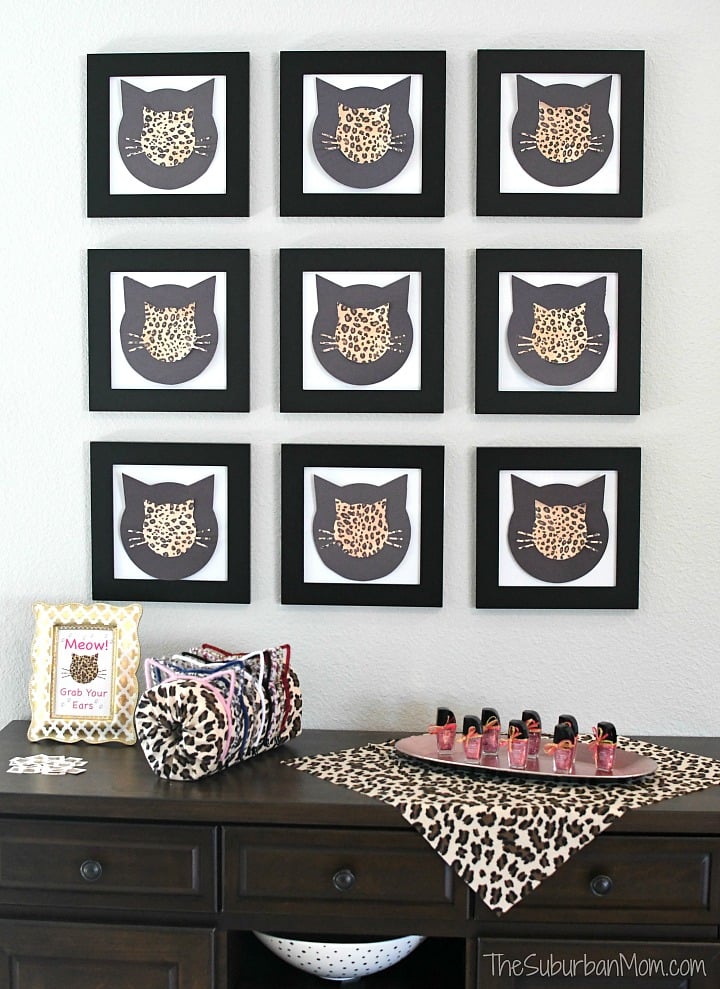 I also used the cat outline to create a banner out of cheetah print paper for the food table. And I decorated the front door with a cat head and number seven cut from sparkly black paper as a door decoration.

My daughter is obsessed with temporary tattoos and nearly always has one or more on. Since I was unable to find cheetah tattoos she liked. I used my cat head to make our own tattoos. It’s actually really easy to make temporary tattoos. All you need is tattoo paper HERE, a digital design and a printer. 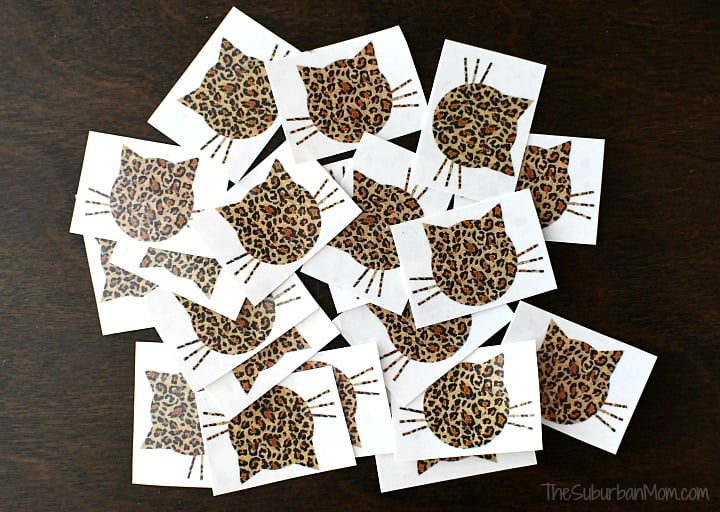 Follow the directions on the package of tattoo paper. Note, the file has enough images for 20 tattoos – half of the paper. I saved the rest of the tattoo paper for another project, but if you want more tattoos, just run it back through the opposite way. 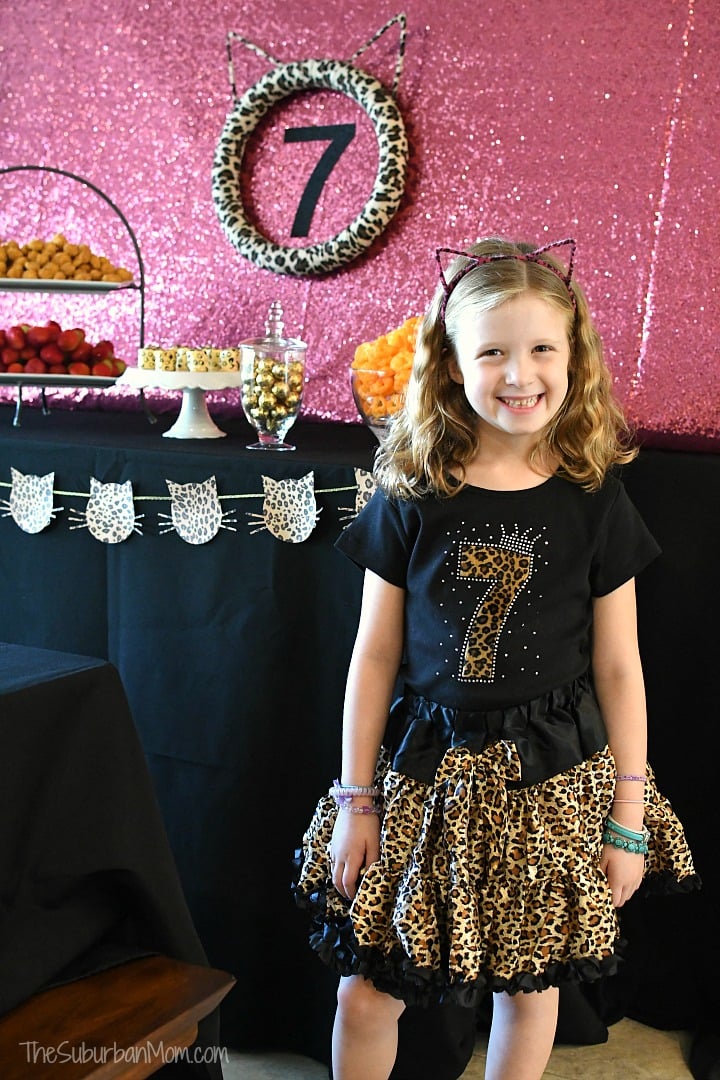 In keeping with the theme, I decided I needed some cheetah print in my life. I tried on several different leopard looks and finally settled on cheetah print leggings HERE and black shirt HERE. The leggings are super soft, and I liked the shirt so much I order it again in more colors. 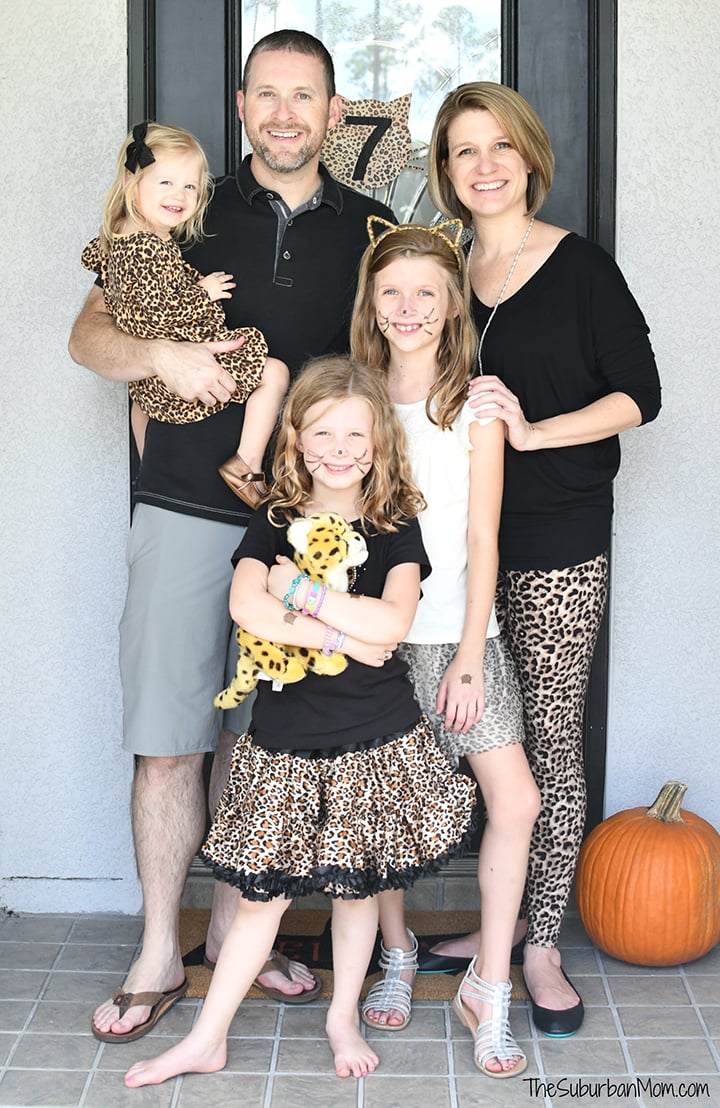 I love to create a themed craft for parties. It gives the kids something to do, which helps channel the wild birthday party energy. This one, I am happy to report, was one of my better ideas because there was no messy clean up. (The year before we made emoji slime at the emoji birthday party, and it was a mess to clean up.)

Details for the Cheetah Sun Catcher craft to come in another post soon. 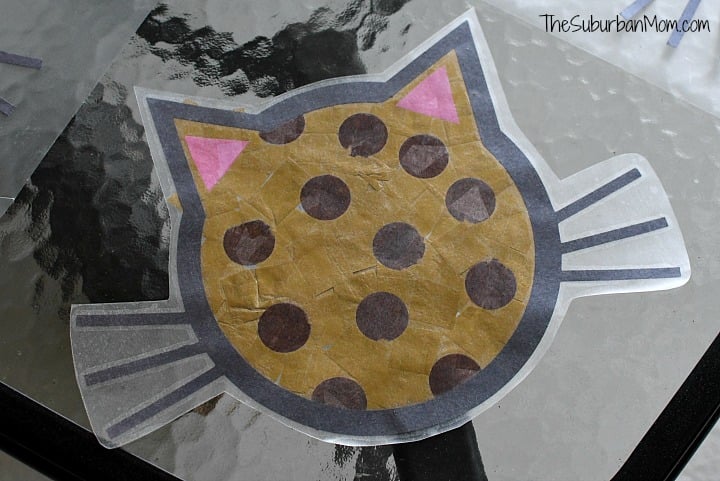 In addition to the craft, we played an animal game. Again, an easy activity to keep kids entertained and not running amuck. The game was a simple “guess the animal” game. I taped an animal name on the back of each child and they gave each other clues to guess which animal they were.

Since the kids were first graders, I reviewed all of the animals before placing them on kids backs to make sure everyone recognized the animal name. Unfortunately, I don’t have a picture of the game. But it was a hit. We played several rounds before the kids were ready to move on.

In keeping with the cheetah theme, we served Cheeto Paws as snacks (found at Target). I was so excited to find these. Party tip, to make a large bowl appear fuller, place a small clear bowl upside down in the larger bowl first. This way I don’t put out more snacks than we need and I can use the same bowl for parties big and small. 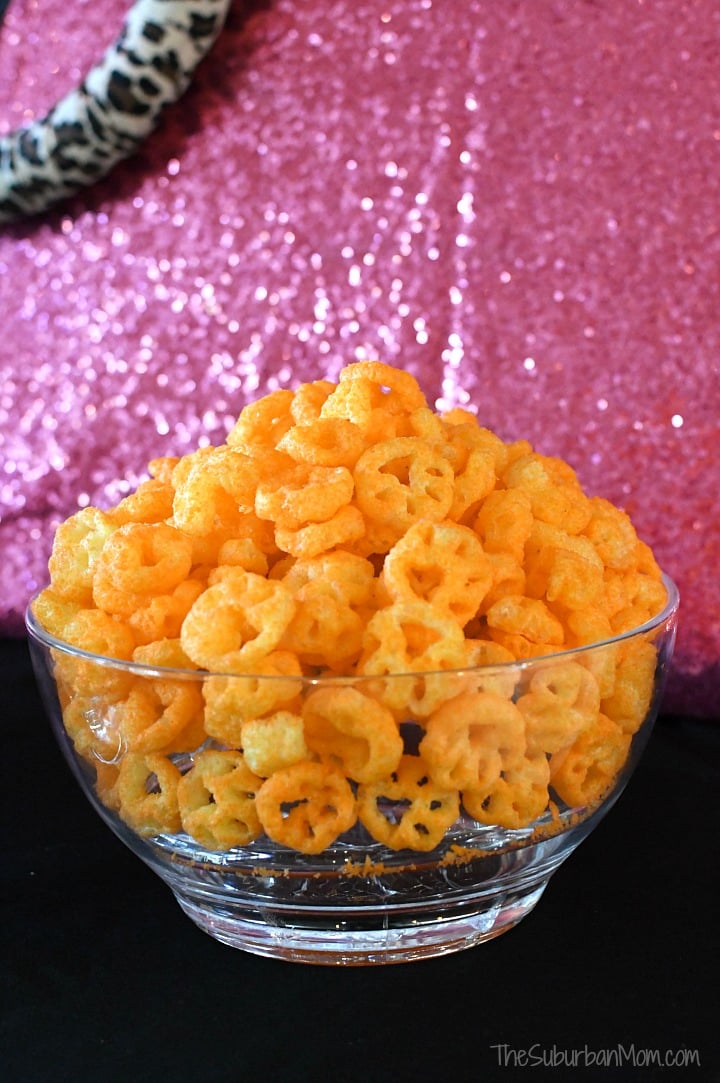 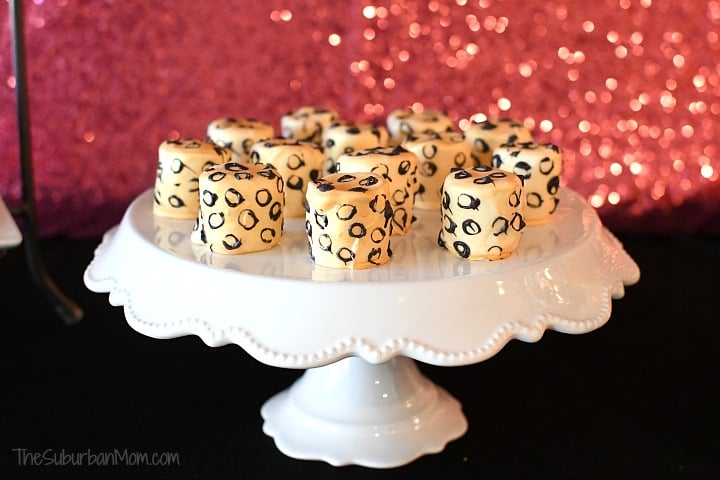 My favorite treat was a bit time-consuming, but they turned out so cute. I drew a cheetah pattern on chocolate balls wrapped in gold foil with a black Sharpie. (Similar HERE.) I did it while watching TV, so it wasn’t too bad. And they made such a cute treat, the kids loved them. 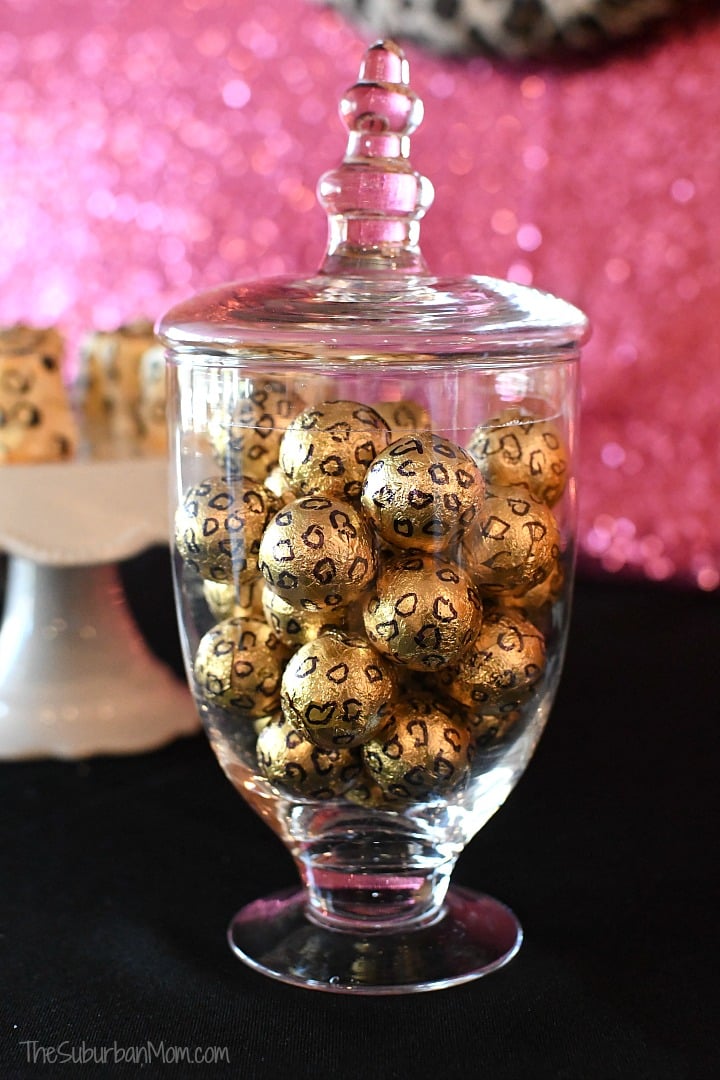 Finally, the cake. We found an image of a cake like this online, and Sissy HAD to have it. Rainbow, cheetah — she was all in. I took the picture to our Publix bakery and they were able to replicate it. It is very Lisa Frank, but she loved it. (Please ignore the fact that the baker squished my daughter’s name… I had to. Insert eye roll.) 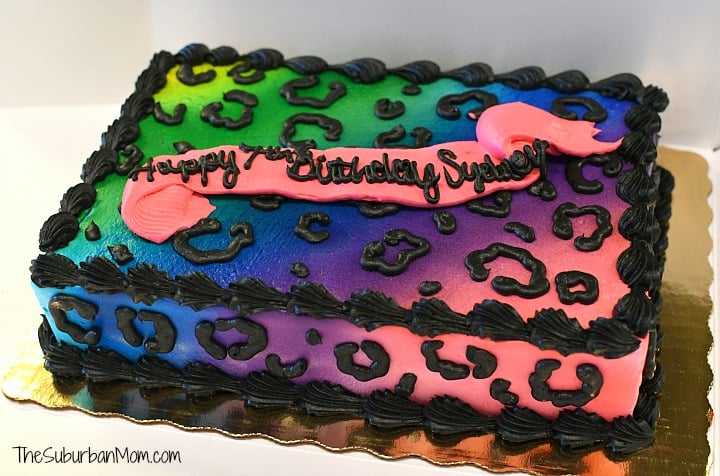 Want to shop my party, here are the supplies we used.