I’ve been preparing for my daughter’s Harry Potter Birthday party since I was in college. Not really, but that’s when I discovered the magical world, and every page I read sitting in my flat in London brought me closer to this day. I was so excited to share Harry Potter with my daughter when she started the series last summer, and couldn’t be more pleased that she found the wizarding world to be as wonderful as I do. I am happy to share my Harry Potter birthday party ideas and free printables with fellow Potterheads. 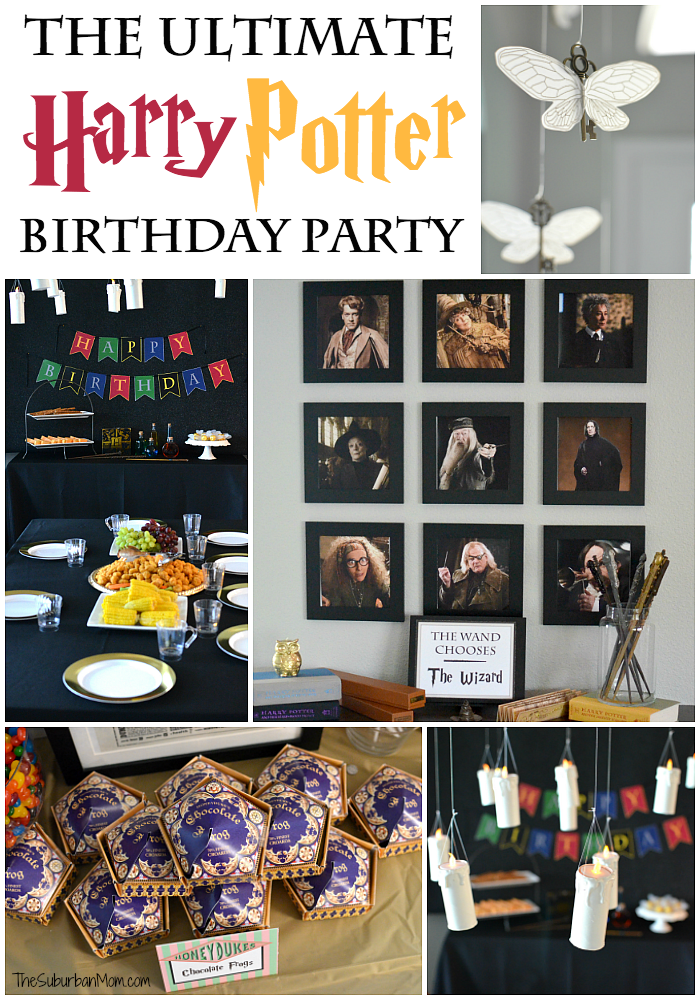 The biggest challenge in creating the ultimate Harry Potter Birthday Party is narrowing down the ideas. There are so many magical and wonderful elements from the books that make wonderful additions to a birthday party, and my Pinterest board is crazy full. Even after finally narrowing things down, I still had to cut out things because there are only so many hours in the day and only so many minutes in a party.

One thing I absolutely knew I wanted to do was to hold Hogwarts classes. I let my daughter help choose the class schedule and we came up with a plan for Divinations, Herbology, Charms and Potions. (She vetoed Defense Against the Dark Arts.)

To make Divinations come to life, I designed Harry Potter fortune tellers (also known as Cootie Catchers). This class was easy, mess-free and perfect for a group of 10-year-old girls.

Since this was our first class, the girls sat on the couch while I explained that we would be taking magical classes. I was surprised by how many of the girls were very unfamiliar with the world of Harry Potter. But I assured them they didn’t need to know anything about Harry Potter to have fun. 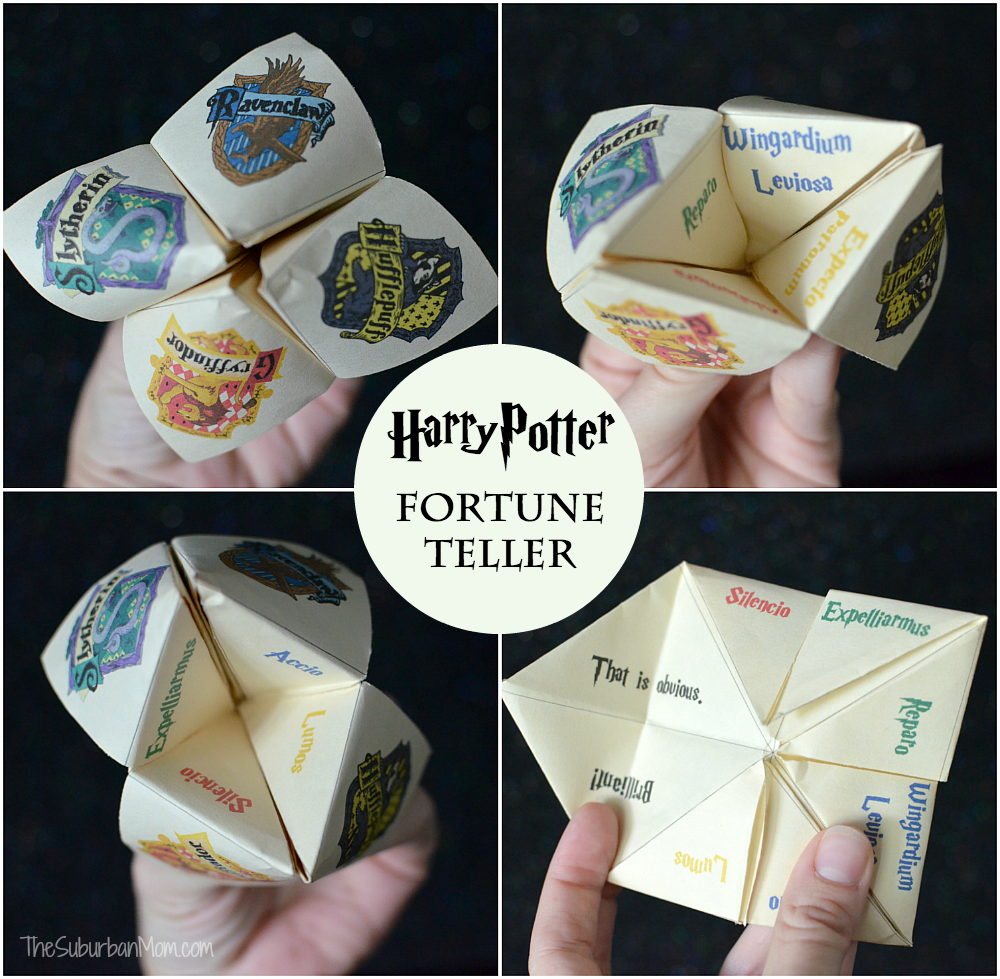 I printed the Harry Potter fortune tellers on brown paper that looks like parchment paper to give it the right look for Harry Potter.

Because I knew the girls would finish their fortune tellers at different rates, I left out a Harry Potter Would You Rather Game for them to play as well. It was a huge hit! I downloaded the free printable HERE. To make it more Harry Potter-like, I printed it on vellum paper, which I used for several things at this party. It looked really cool.

The girls had so much fun with this free Would You Rather printable. I highly recommend downloading it. They also played it while they ate dinner, and my daughter even took it to school the next day.

Everyone loves to pretend they are casting spells, right? So we sent the kids to Charms class to learn one of the very first spells Harry Potter and his friends learned – wingardium leviosa – the charm to make things fly. 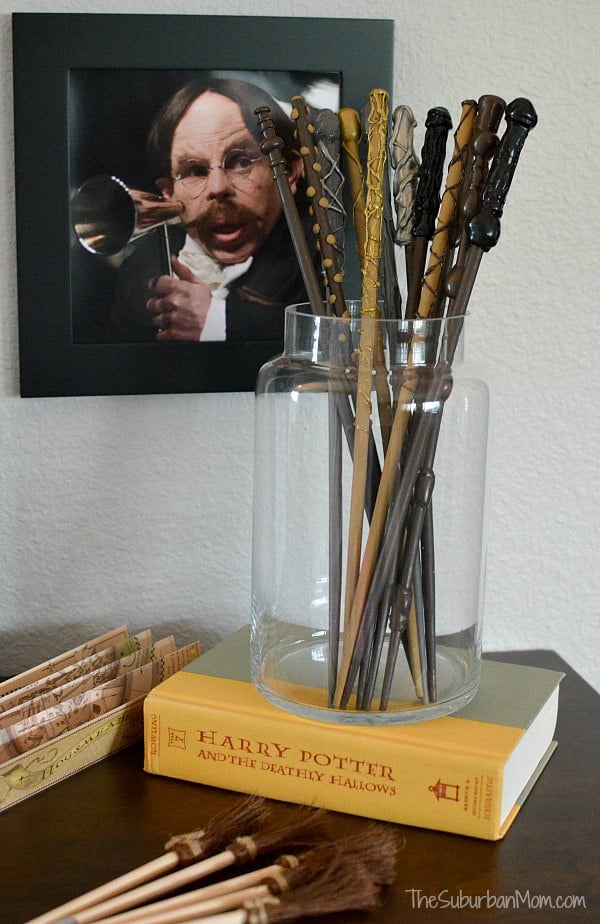 The first thing needed to create this class is a wand. For this, I handmade wands using cooking chopsticks, hot glue and acrylic paint. I had a wonderful time creating my wands. You can do this craft very simply or very elaborately, I went elaborate because it was fun and turned out really cool. I copied a number of wands from the movies including Harry Potter, Hermione, Ron, Dumbledore, Ginny, McGonagall, etc.  The wands doubled as party favors, and the kids were amazed.

I wrote a modified wand tutorial to create pencil wands. To create the full-size wands, you can use the same tutorial, just purchase the 18-inch chopsticks.

Charms class was quite simple. We blew up balloons for each child and asked them to chant wingardium leviosa while attempting to keep their balloon in the air using only their wands. I used two jump ropes as a start-finish line and had them race about 20 feet.

The challenge was a bit tricky because it was breezy that day and as soon as the balloons hit the grass they popped. Everyone was full of giggles, and one girl made it to the finish line. It was a quick class, but everyone had fun. 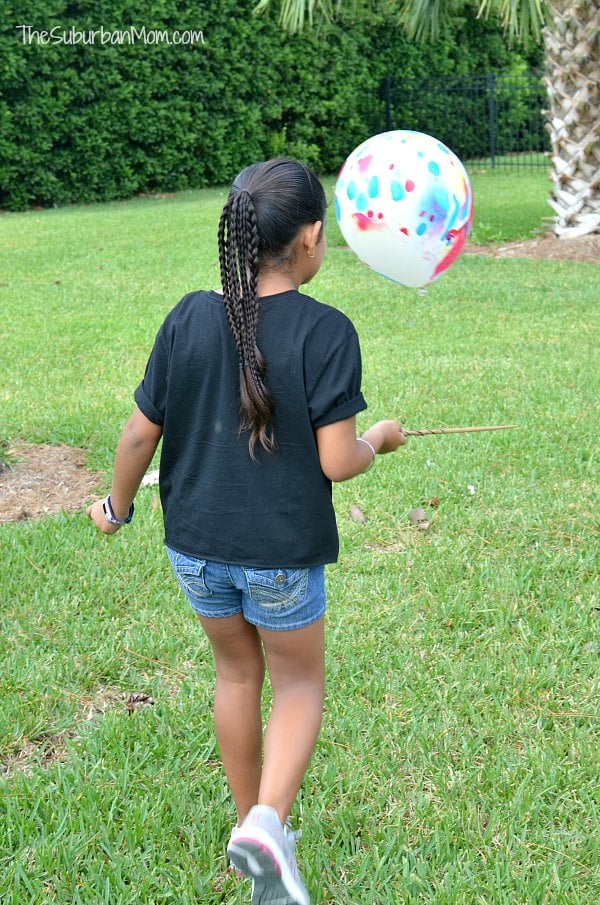 I was so pleased with my idea for this class, and even more pleased that the girls loved it. Just like in Harry Potter, we repotted mandrakes. Also known in the Muggle world as succulents. 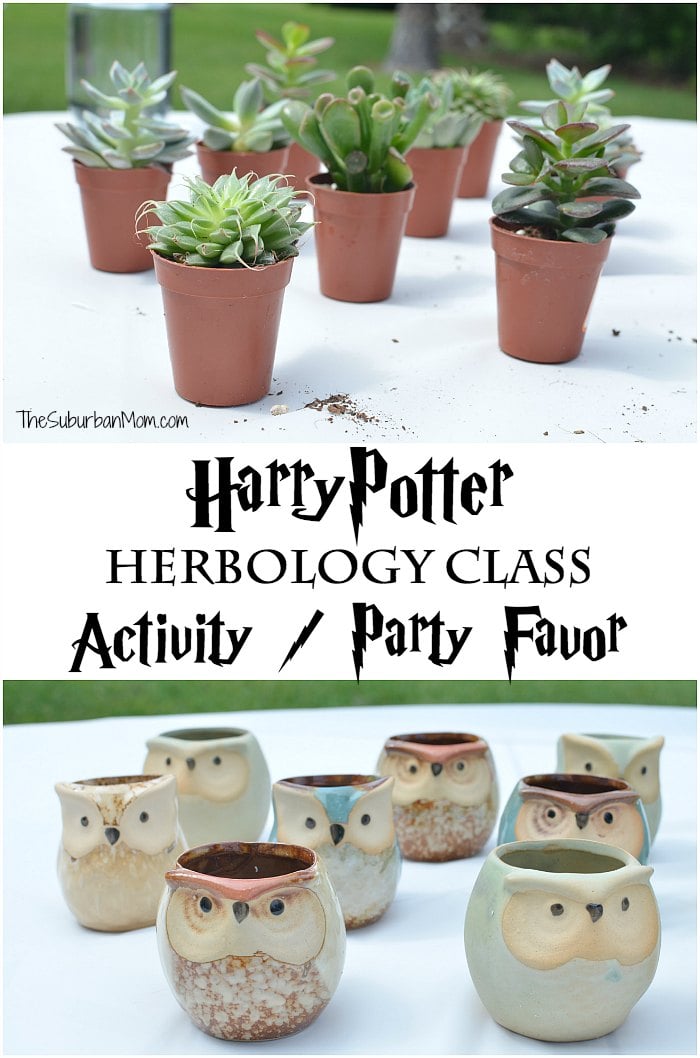 I found adorable owl succulent pots on Amazon, and then picked up mini succulents and potting soil at Home Depot. The girls took turns adding potting soil to the owl pots, repotting their “mandrakes” and then watering them with a medicine dropper.

The girls were very pleased with their potted mandrakes and excited to learn these were also a party favor they got to take home.

Tip – we had this class outside, so I didn’t have to worry about any mess-making. 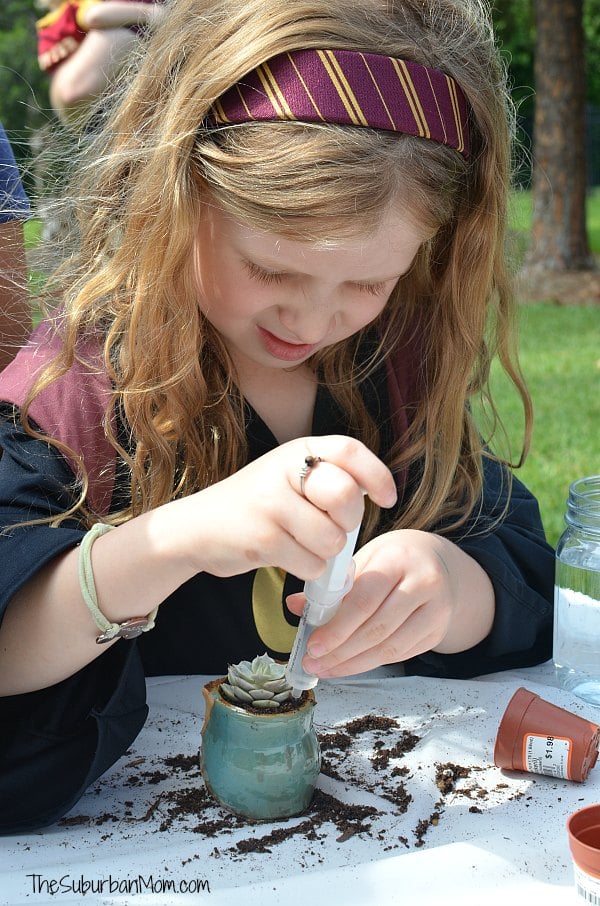 What is the most exciting potion a group of 9- and 10-year-old girls could make? SLIME!

For potions class, I offered the girls a variety of fun add-ins and supplies for slime making. I found these cute potions bottles at Michael’s and filled them with various slime-making materials. This was the girls’ favorite class. 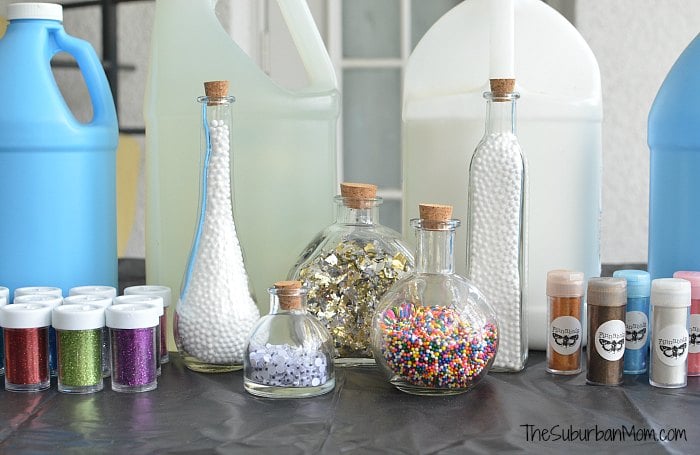 Once again, I was surprised how many of the girls had not yet made slime. So it did take a bit more oversight on my part than I was expecting. But there were so many happy giggles, and it made yet another fabulous party favor.

I purchased black plastic bowls (Party City) to resemble cauldrons for the girls to mix their slime. And I gave them plastic wands (aka plastic knives) to stir their slime. When they were done, I gave everyone a plastic container to take their slime home in — these are the perfect size for storing slime. 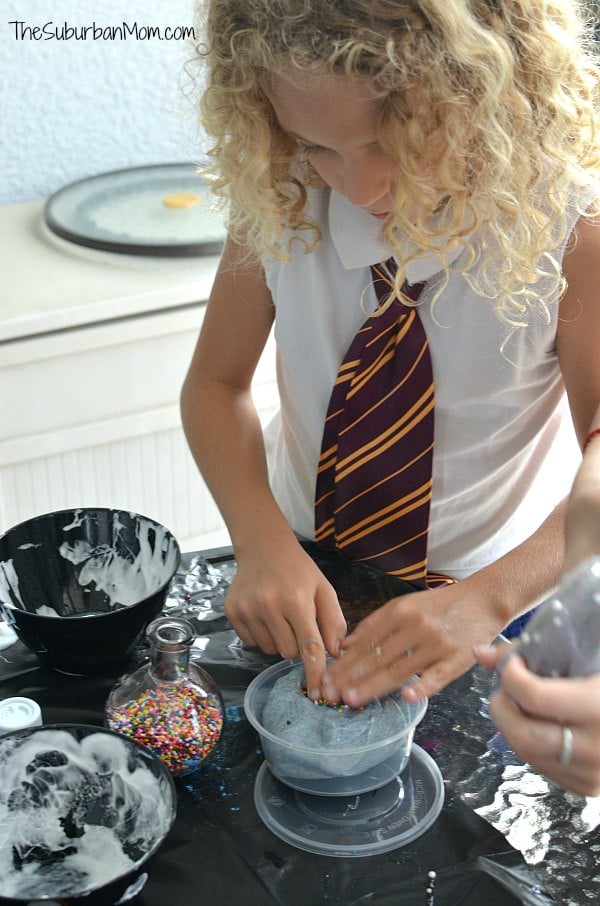 My daughter decided that she wanted her Harry Potter birthday invitation to look like a train ticket to Hogwarts. I suggested an acceptance letter to Hogwarts, but she was set on the train ticket so that’s what we did. The ticket is my design, and I printed it on cardstock and cut it out so it would look like a ticket.

I’ve had a number of requests for the invitation. A customized invitation is now available in my Etsy shop. Thanks for your support! 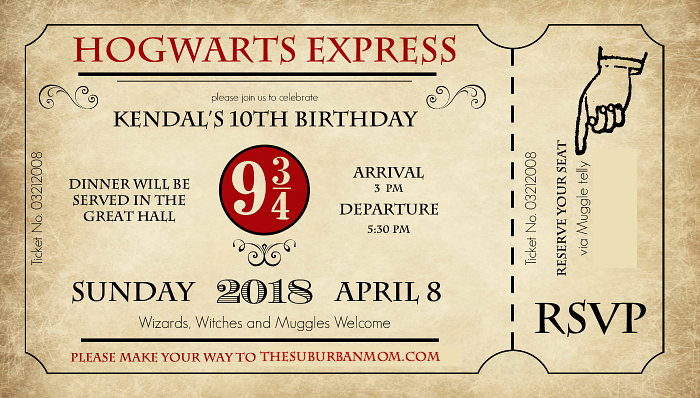 Transforming our home into Hogwarts castle for the party included turning the dining area into the Great Hall, a nod to the castle portraits, flying keys, a display from Honeydukes and Moaning Myrtle hanging out in the bathroom.

Partygoers were welcomed by the Hogwarts crest flying on a banner on the front door. 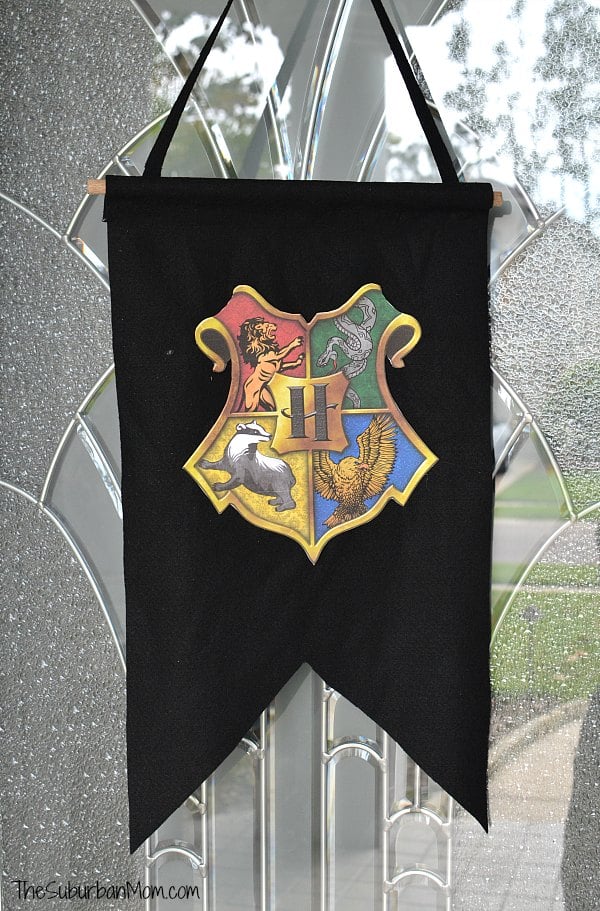 Inside the front door they found themselves in the third-floor corridor, you know the one that was off-limits in Sorcerer’s Stone. (It also was a great way to keep kids out of the playroom for the day.) Overhead, flying keys swirled about and my daughter’s broomstick lay in the corner ready to take flight. 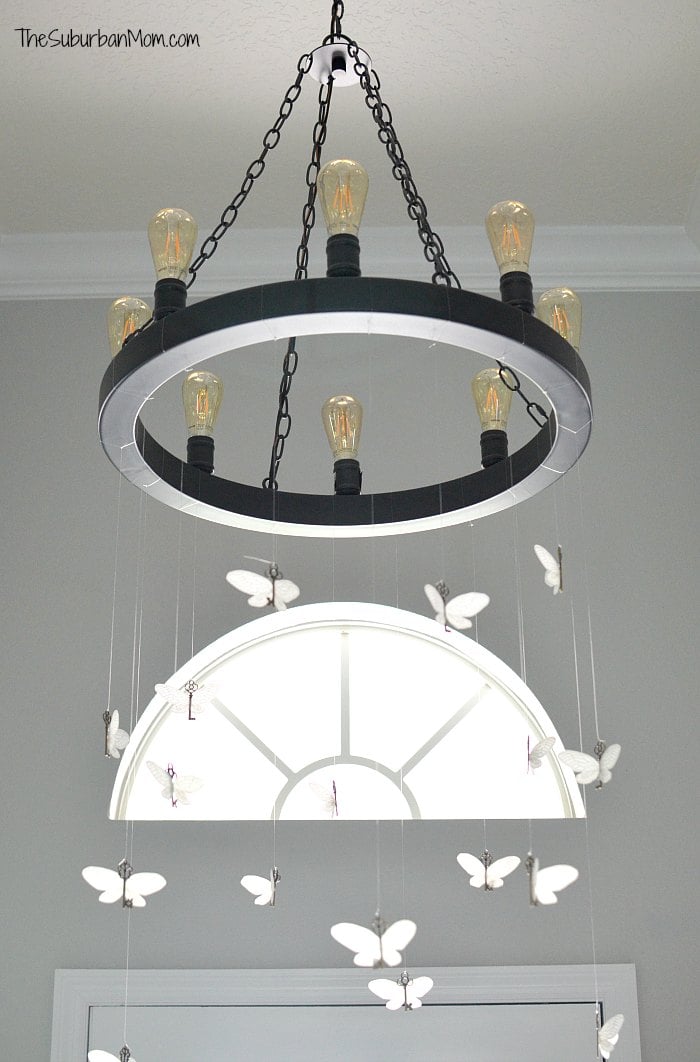 The flying keys were so simple but made such an impact. I bought these inexpensive keys on Amazon and used this printable for wings. Tip – I printed them on vellum paper, which gave them a cool translucent look so you could see the wing pattern from both sides. Then I hung them from the chandelier with monofilament. So pretty. 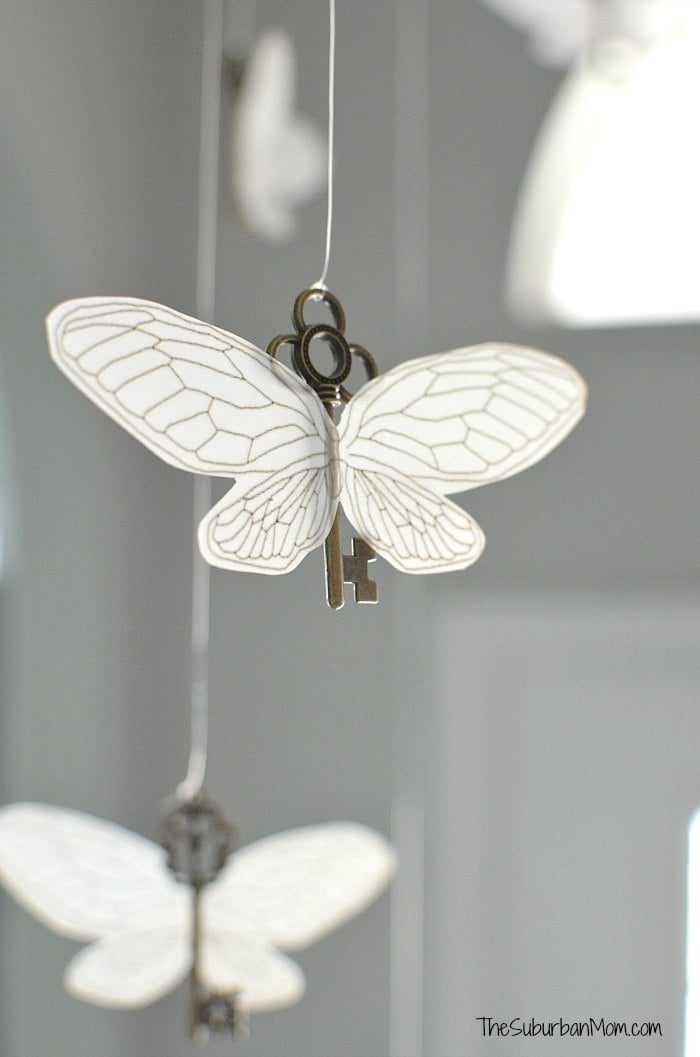 I transformed our family gallery wall into a gallery wall of Hogwarts professors. I found all of the professor’s images online and cropped them square to fit in my frames. Below the gallery wall, I used Harry Potter books and other various things we had to decorate the table. 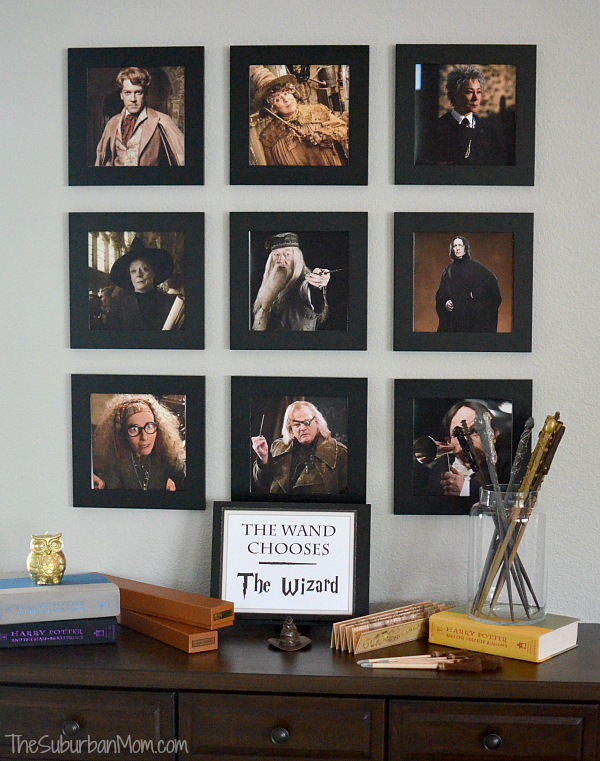 Probably the most dramatic decoration was the floating candles hanging over the great hall. Everyone loved the way these looked, even my husband who painstakingly hung all 24 of them above the table from our 14-foot ceiling. I used toilet paper rolls, hot glue, white acrylic paint, white paper, battery-operated tea lights and monofilament to create the look. 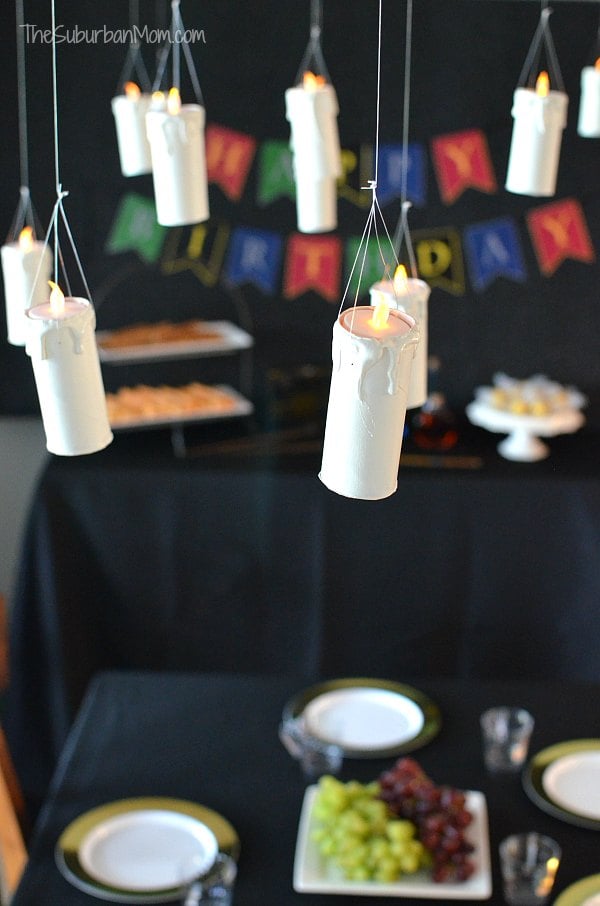 Because we wanted it to look like guests were dining in the Great Hall, we used these plastic gold-rimmed plates and served Butterbeer and Pollyjuice potion in these plastic mugs. 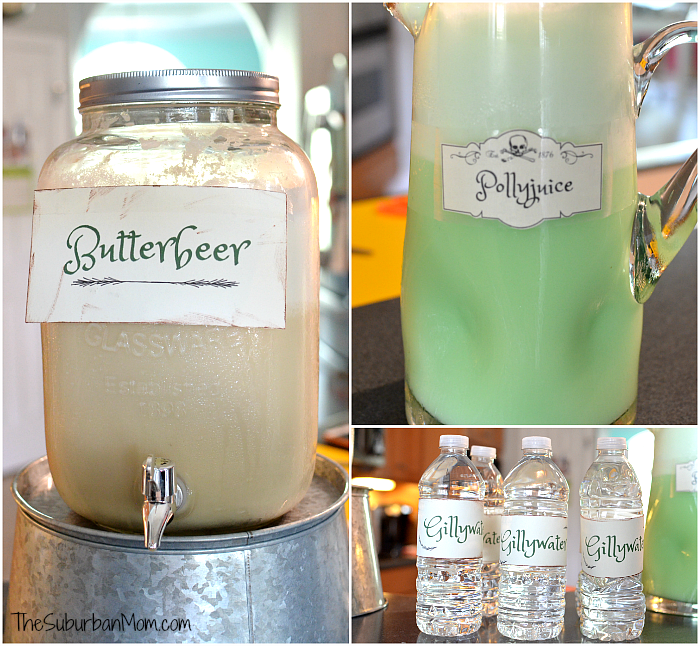 I used the same wings from the flying keys to turn Ferrero Rocher candies into Golden Snitch.

And, of course, a Happy Birthday banner in House colors.

The coolest party element was the Daily Prophet with a moving photo of Harry Potter over the Honeydukes display. I wish I could create a tutorial to make it because it really is spectacular, but he basically hacked a promotional video player he received to play a loop from the movie. Then he edited an image of the Daily Prophet he found online to hold the right size image and placed it all in a frame.

The kids, and adults, couldn’t get over this detail. 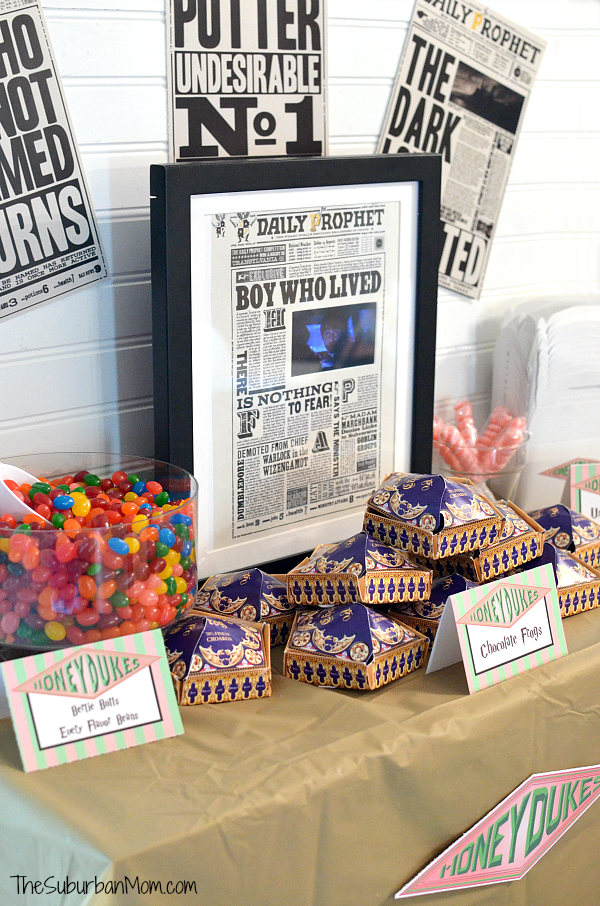 I didn’t set out to have a ton of favors for this party, but as everything came together it was just natural to make things for the kids to take home.

Inside the Chocolate Frog boxes, I included one of my favorite DIYs I made the birthday girl her own Chocolate Frog card. I don’t have a great picture of it, but on one side it has a photo of her standing in front of Hogwarts (at Universal), and on the other side it has information about her. You can download the editable chocolate frog card HERE. 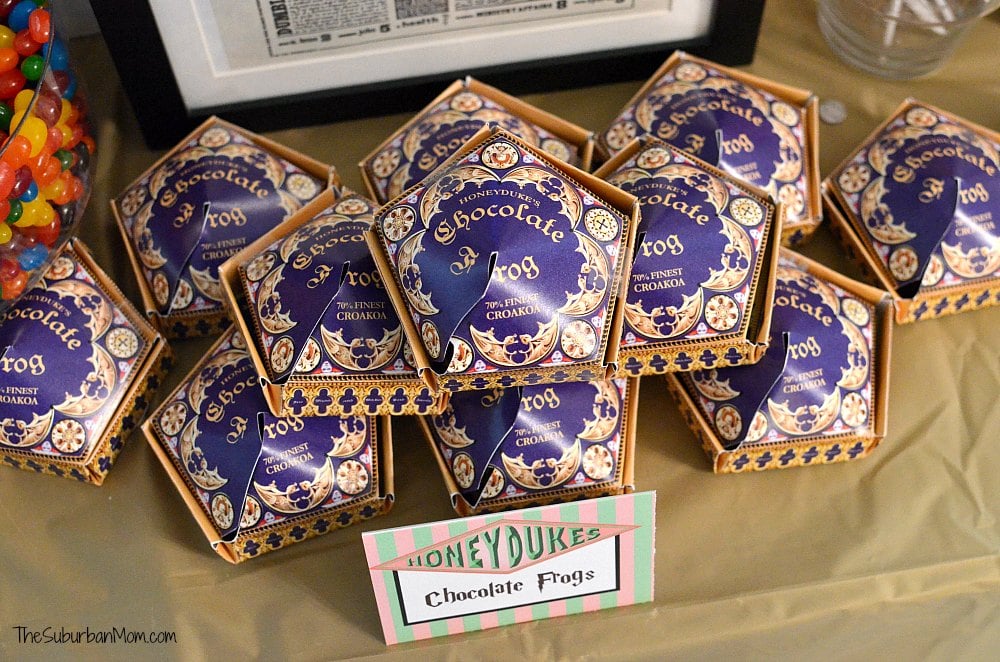 I used a number of free printables I found online so that I didn’t have to create everything, but I still designed many of my own as well. I hope you enjoy using these for your Harry Potter Birthday Party. 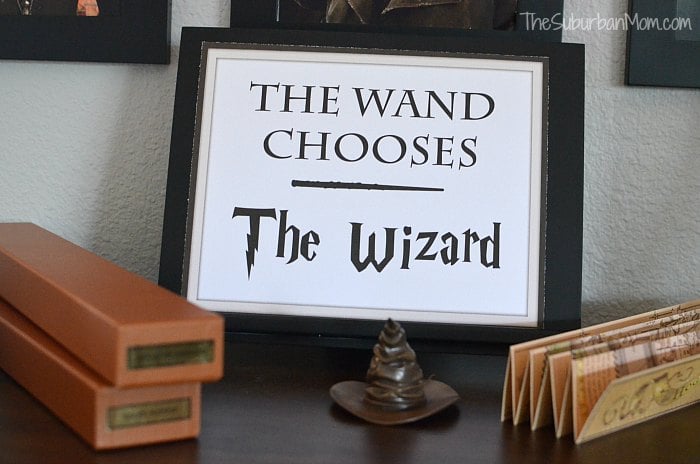 To make Moaning Myrtle look translucent and watery, I printed her on vellum paper before taping her to the toilet seat. Oh boy did it make the kids giggle. 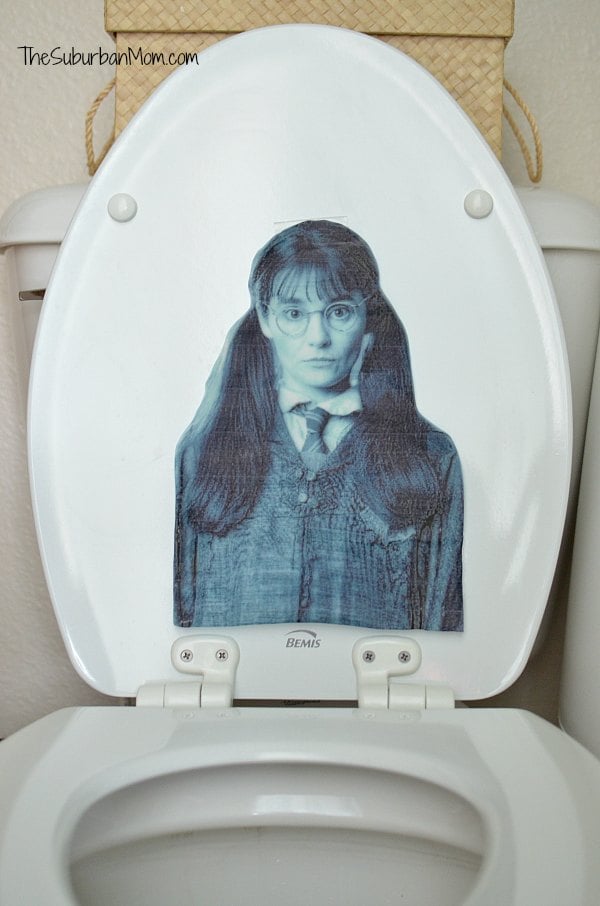 And the most important part of the party, my daughter had a wonderful time! I hope you enjoy these Harry Potter birthday party ideas and find inspiration for your own party.

Thinking about a trip to Orlando, see why we love Wizarding World of Harry Potter at Christmas.