There are two things all of my kids love these days, emojis and slime. For my daughter’s birthday party we combined them to create a fun emoji party favor and activity – fluffy emoji slime! Read on for the slime recipe and make your own. 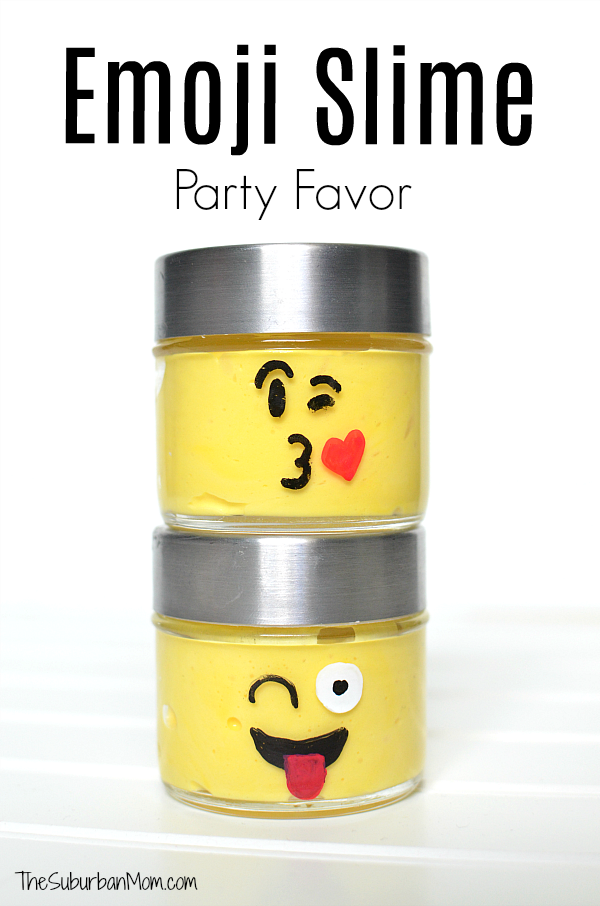 If you are making this for a party, be sure to invest in a gallon size jug of glue. It is a much more economical way of purchasing glue. 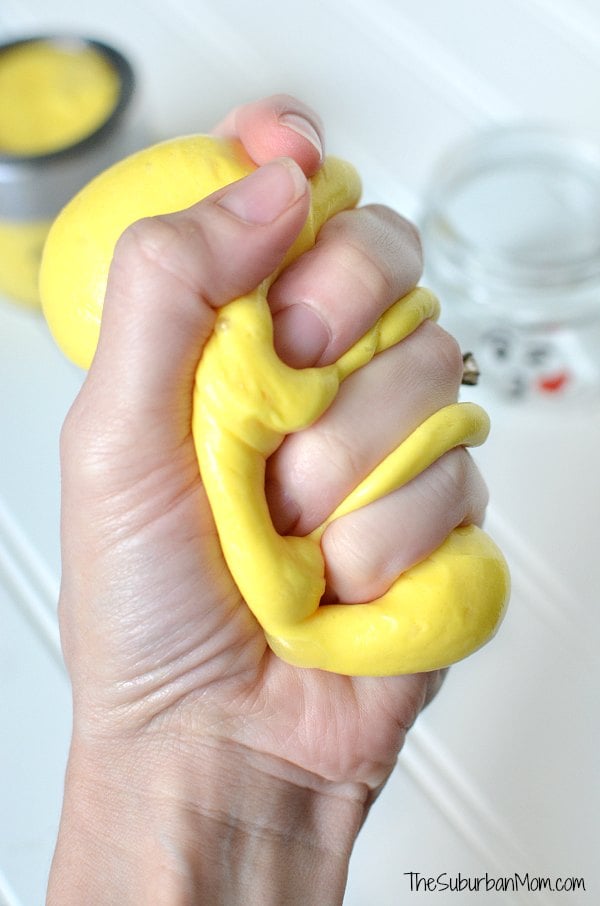 Since we made this as a party activity, the recipe above makes about one jar full. But I’ll be honest, I don’t measure. I eyeball it. Sometimes I add a little more or a little less to make it just right. If it is too sticky, add more starch, too hard more glue. But the proportions above make about an adult size handful of slime, which is the perfect amount to play with.

Pour a cup of glue in a bowl and add shaving cream and yellow coloring*. Stir until well mixed.

*To really get a nice vibrant color, I use gel food coloring.

Add 1-2 tablespoons (adding one at a time) to the mixture and stir. As the mixture starts to clump, take if out of the bowl and knead it with your hands. It will be very sticky at first, but it should start to form together, if not add a bit more liquid starch. 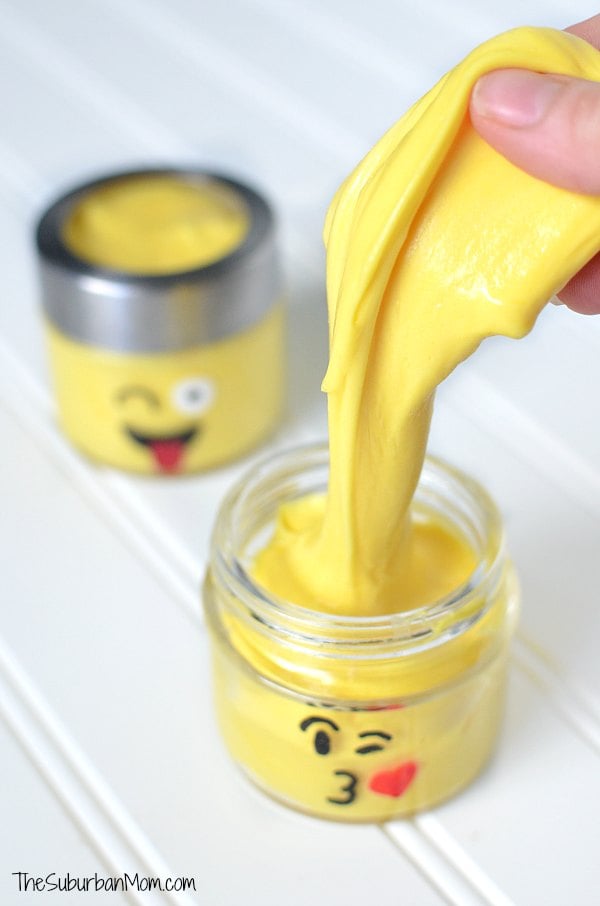 I ended up buying the little jars from Hobby Lobby. There were several I considered on Amazon as well these 4 oz hexagon jars, 4 oz round jars or 8 oz plastic jars would work well. If you use 8 oz jars, double the slime recipe.

I used Sharpie paint pens to draw various emoji faces on the jars. With older kids, I probably would have given them the paint pens and let them design their own emoji faces, but I wasn’t sure the little ones could manage. I think I made the right call. 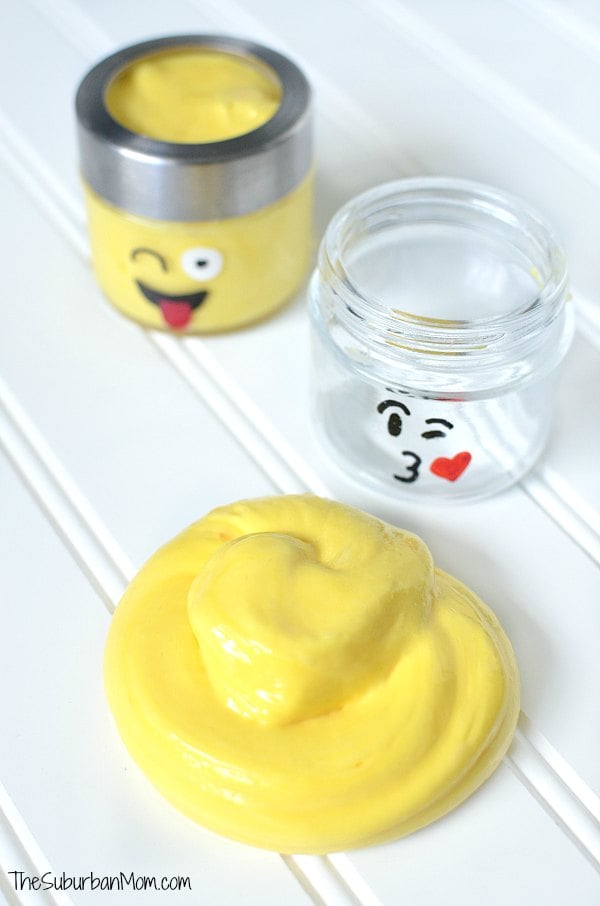 My big plan was to let the kids make their own emoji slime at that party. That way it served as both a party favor and party activity. What I didn’t factor was how young some Kindergartners are. While my daughter has made slime several times and follows directions well, not all Kindergartners are able to do so. We had a massive mess within seconds.

If you are doing this for a party, wait until kids are older to make it themselves. My daughter’s friends at her 10-year-old party had a blast with Harry Potter slime and the mess was reasonable. But for littles, I recommend making the slime ahead of time and letting them play with it at home. You will thank me later.

If your little one loves emojis, don’t miss my daughter’s Emoji Birthday Party. 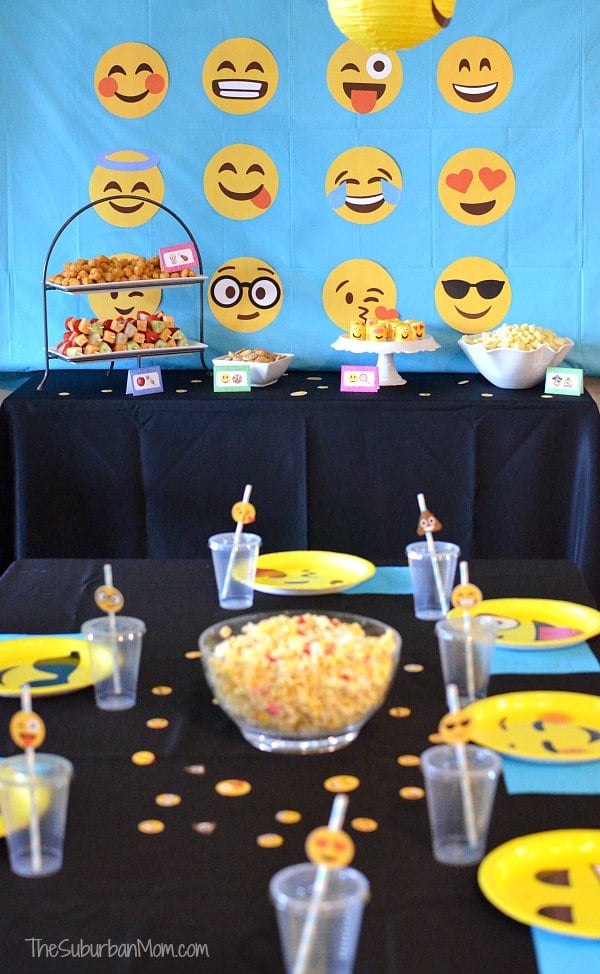