I was invited by Disney to attend the Toy Story 4 press conference with Tom Hanks, Tim Allen, Keanu Reeves and Tony Hale.

It was an honor to listen to Tom Hanks, Tim Allen, Keanu Reeves, Tony Hale, Christina Hendricks and Annie Potts talk about what it means to be part of Toy Story. From the new characters to those who helped shape the story from day one, they seem to be as excited to share the movie with the world as we are to watch it. There is no other way to describe the Toy Stoy 4 press conferences other than epic. 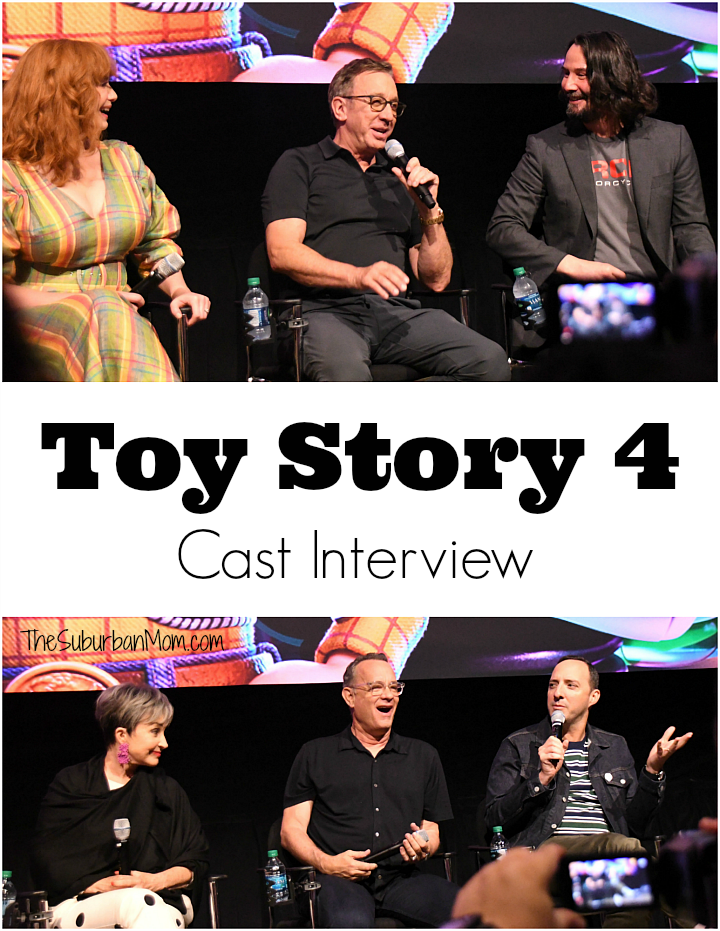 Not only was the cast wonderful, but the location of the press conference could not have been more perfect. It took place in the old animation building at Disney’s Hollywood Studios — behind Toy Story Land. Ah-mazing.

Toy Story has become more than a movie, it has become a world. A fact that was not lost on the cast, who recognizes the monumental role these movies play in the lives of people from all over the world.

There is a theme park out here. A theme park. A really spectacular one that’s about this movie we started 25 years ago. I can’t describe except I’m honored and humbled to be part of this thing. 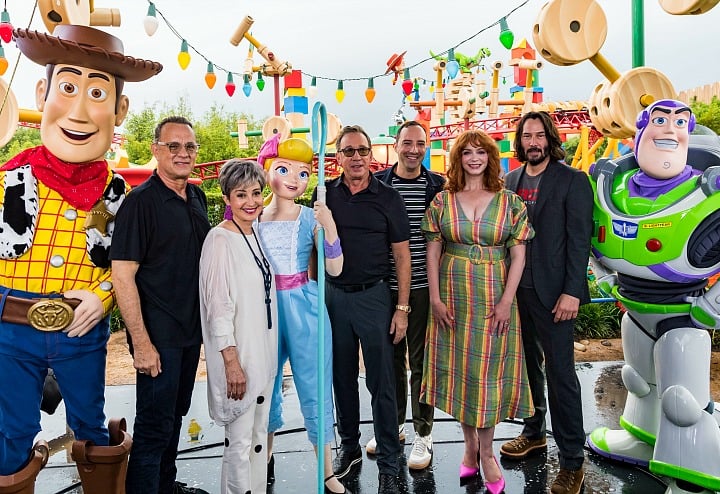 We know Keanu Reeves as the ultimate action character. As calm and composed in real life as he appears on screen, his character Duke Caboom is anything but composed. Created as an action toy, Duke Caboom is a tough toy with some heavy insecurities. And Duke Caboom is downright funny, often without meaning to be.

I think that there’s a bit of Duke Caboom in all of us. 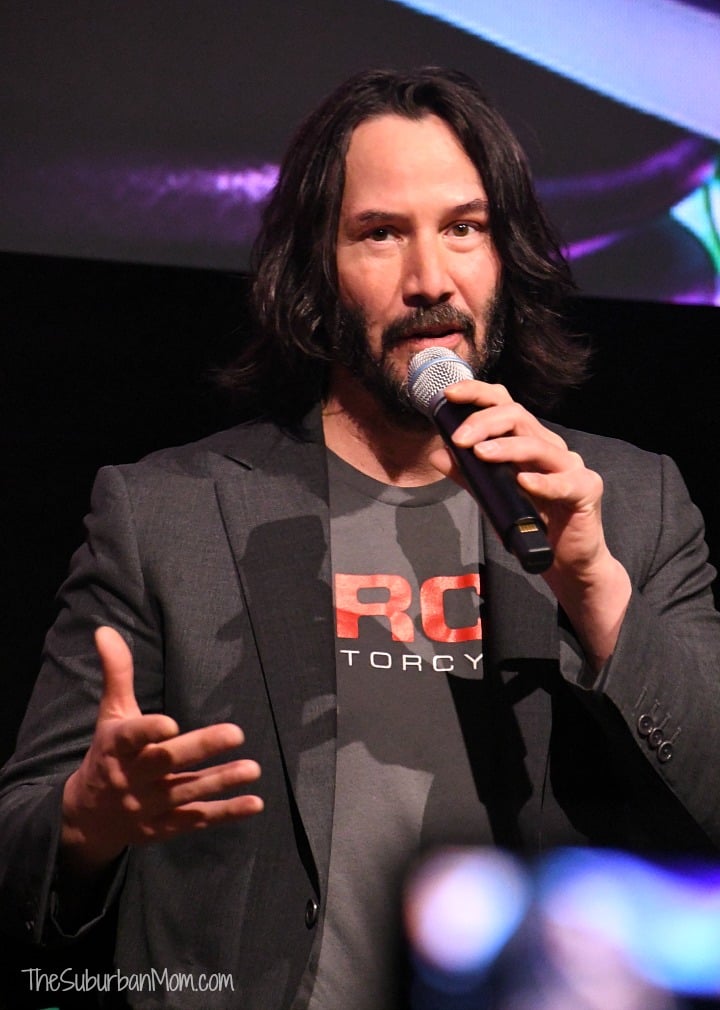 In true Toy Story fashion, Gabby Gabby is a delightful antagonist, who as it turns out isn’t really the villain the toys believe she is when they first meet her. She might just be my favorite Toy Story “villain” to date because she is so much more complicated.

She comes across as the villain at first, and then you realize that she’s coming from a very loving place. I think that’s important to say maybe you don’t like someone at first, but how did they get there, and why are they there, and understanding their story. So I think she’s very special in that way.

An interesting fun fact: like her character, Christina Hendricks is the proud owner of a ventriloquist doll. 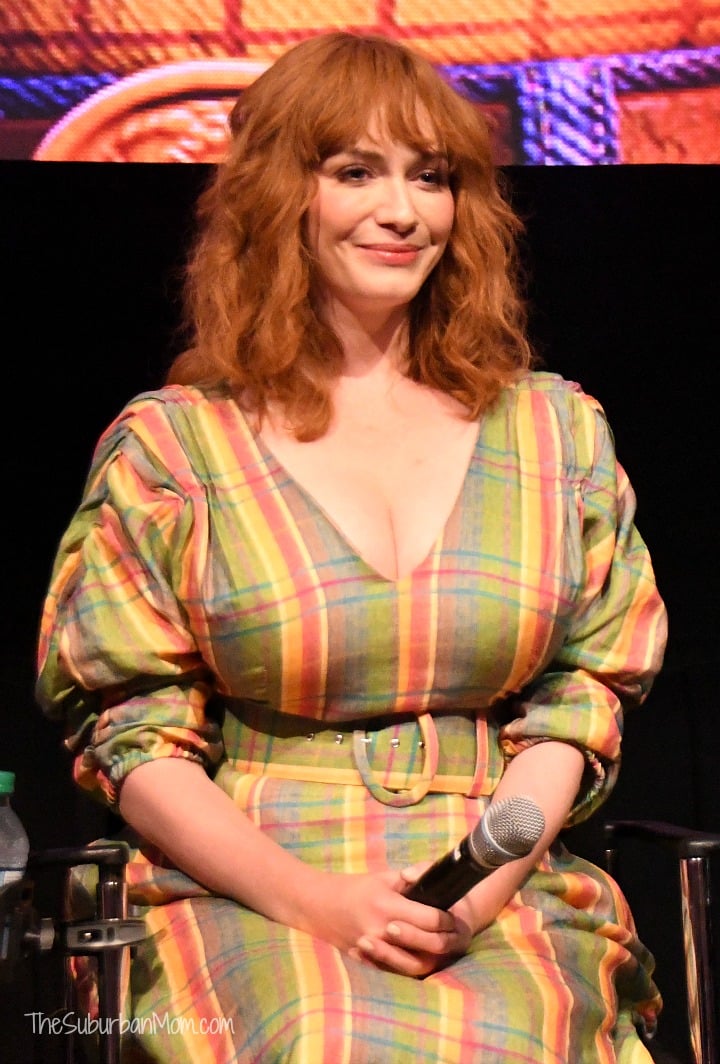 If you’ve ever imagined what it would be like to sit and have a conversation with Tim Allen, you have a pretty good idea what the press conference was like. He is every bit the jokester he appears in TV and film, and I could have listened to the banter between Tim Allen and the rest of the cast all day. He’s just funny.

Tim Allen really does bring his humor to Buzz Lightyear, whether or not the animators always want his input. He can’t help himself, over the last 24 years he has truly become Buzz Lightyear.

When I ad-libbed, it’s not a happy moment for the animators. Because they’ll go, “Oh God, that was funny. Darnit that was funny.” Which means they’ve got to go back and reanimate. 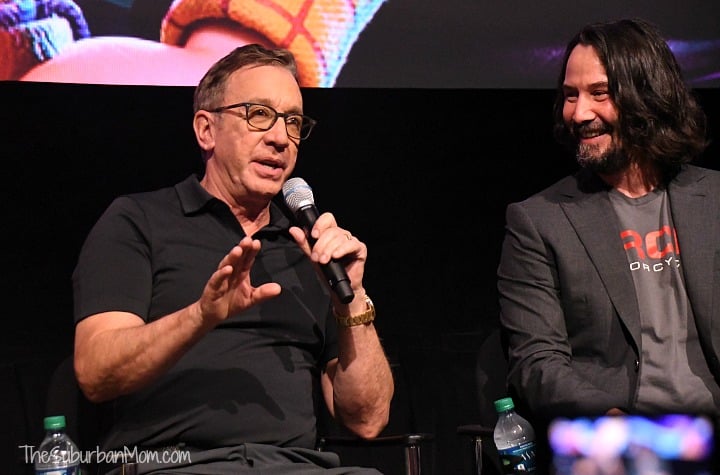 Tom Hanks deserves a post all to himself. He was silly and boisterous as well as thoughtful and humble. I loved hearing about his friendship with Tim Allen over the years and how Toy Story brought them together. But my favorite moment of the entire press conference was when he brought me to tears recalling the moment he realized the magnitude of the impact his role as Woody. Not just on kids who grew up on Toy Story and the kids watch it today but ALL of the future generations who will enjoy Toy Story.

In Disneyland, in the closing of the show [Fantasmic] the Mark Twain steamboat comes by, and all of the Disney characters are dancing on that steamboat. Belle, and Sleeping Beauty, and Mickey, and everyone. Mulan is there. They’re all there.

I was there with my family. My daughter who is in her 30s burst into tears. I said, “What’s wrong?” And she said, “Look Dad, Look at the end of the boat.” It was Woody and Buzz. She said, “Dad, you’ll always be on that boat dancing for the rest of time as long as Disneyland is here. And that’s more than just a cool thing. 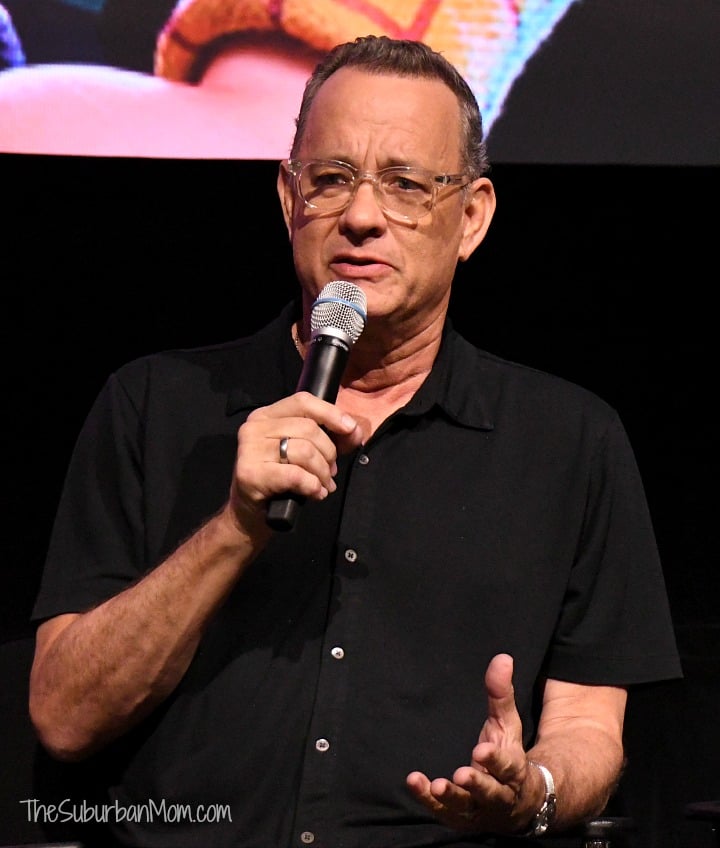 Bo Peep was never a simple damsel in distress. While Woody was always the leader in Andy’s room, she was the leader in Molly’s room. (Bo Peep Returns Toy Story 4 – Everything You Need To Know) Bo Peep’s strength as a leader has only grown in the years since we saw her last in Toy Story 2, and Annie Potts couldn’t be happier about coming back as Bo Peep in a stronger more self-assured role.

Stay tuned for more about Annie Potts from my interview with her after the press conference. 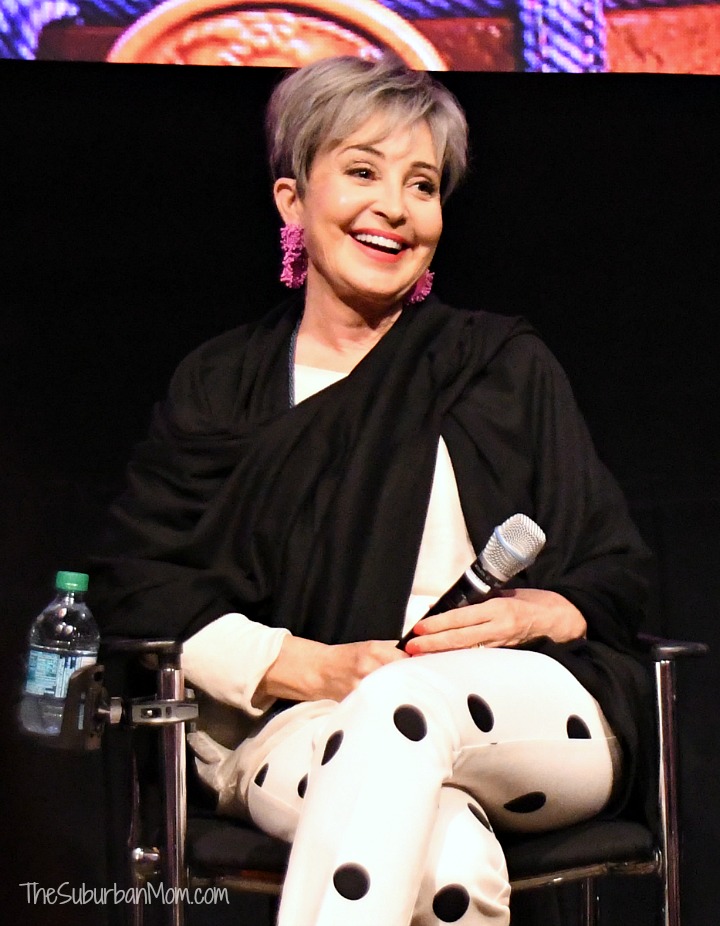 If you’ve read any of my past Toy Story 4 coverage, it’s no secret that Forky is my favorite new character. (Toy Story 4 – 15 Forky Finds For Fans) He is just fantastic. But it isn’t easy to be the new toy on the block, Tony Hale admitted that he was overwhelmed when he first joined the Toy Story 4 cast.

It’s overwhelming, which helps because Forky is very overwhelmed. But I remember when they brought me up to Pixar and they described him as nervous. I was like check. He asked a lot of questions. Check. And he’s kind of gullible to a fault now. Bingo. I’m in. 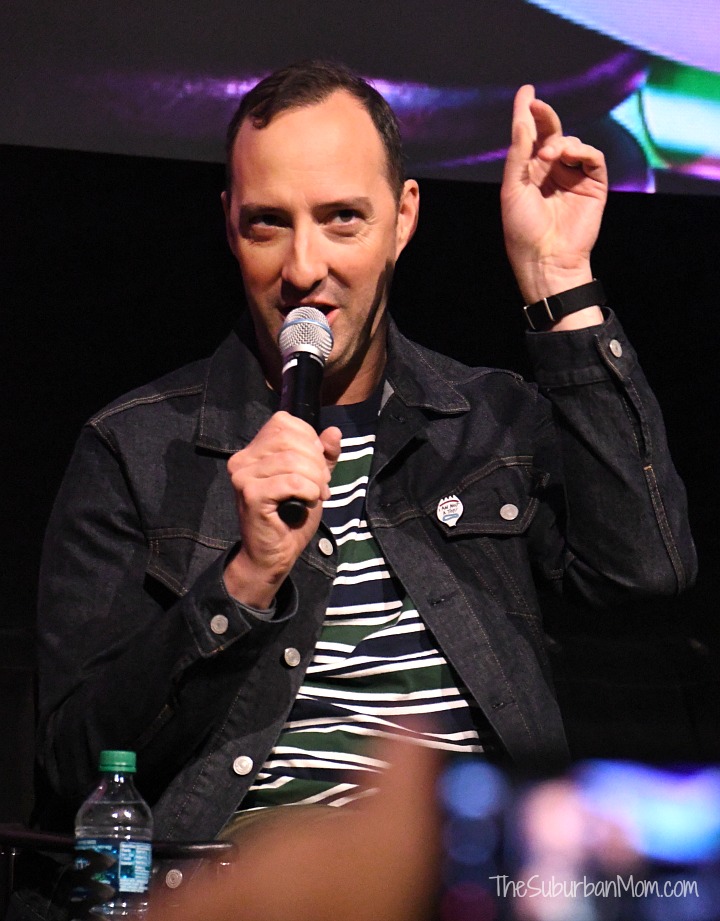 Toy Story toys have a wonderful way of subtly teaching important lessons, and Forky is no exception. He’s not just a silly piece of trash, to Bonnie he is a beloved toy.

I love that he’s a character that his home place is trash. And then Woody comes along and shares that he has a greater purpose. I think just in life, anybody who might see themselves that way and they have worth. They have a purpose. That’s just a beautiful message that Toy Story is giving us.

As if the press conference could get more exciting, I also learned that Forky is getting his very own TV show coming to Disney + in November called, Forky Asks a Question. I am so excited that there is already more to look forward to from the Toy Story franchise.

All links on this site may be affiliate links and should be considered as such. The Suburban Mom is a participant in the Amazon Services LLC Associates Program, an affiliate advertising program designed to provide a means for sites to earn advertising fees by advertising and linking to Amazon.com
34 Shares
Share22
Tweet
Pin12