When I pictured Frozen birthday party ideas for my daughter’s party, I wanted it to have an elegant look — fit for a princess. But I also wanted it to meet my toddler’s expectations of what a Frozen party should look like. That meant it had to be very clearly Frozen without using a lot of characters. The result was a beautiful Frozen Birthday Party that made all of her Frozen dreams come true with handmade elements and just a couple of characters. 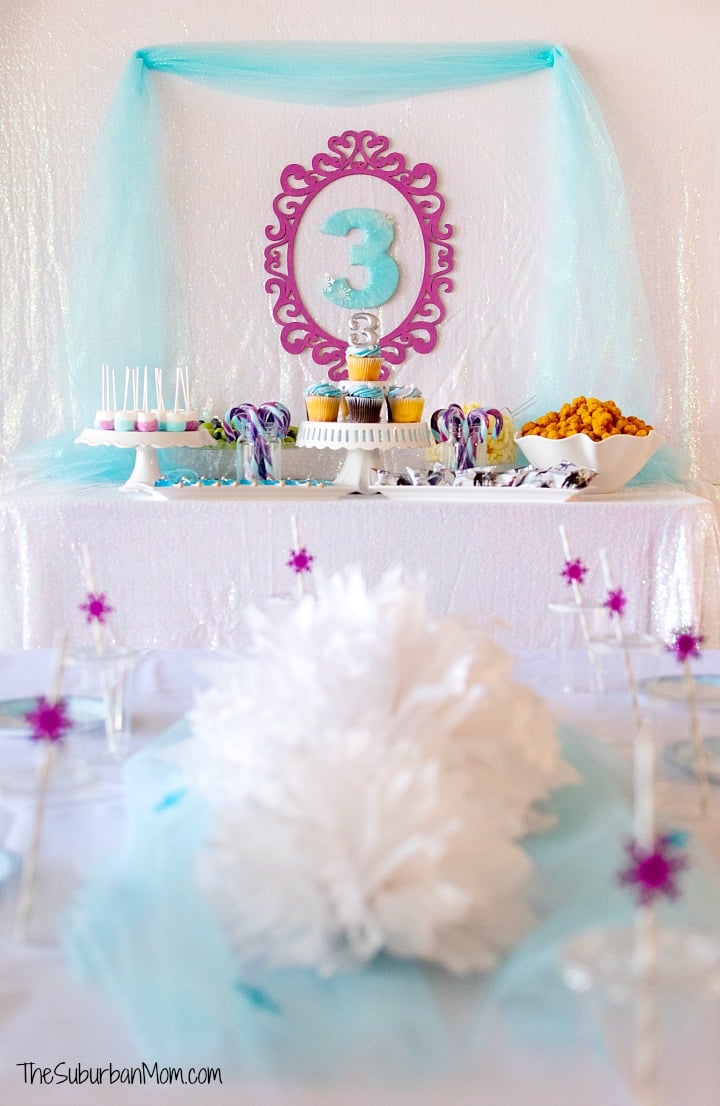 This post contains affiliate links, which means this site may earn a small commission on anything purchased. It doesn’t change the price for you and it allows me to continue to share party tips and printables without charging for them.

My daughter has a great love for both Frozen and Frozen 2. She’s watched Frozen more times than I can count and both soundtracks are on repeat in this house constantly. While I considered a Frozen 2 party, I decided not to make it strictly Frozen 2, instead incorporating elements from both movies with a nod to the new favorite. 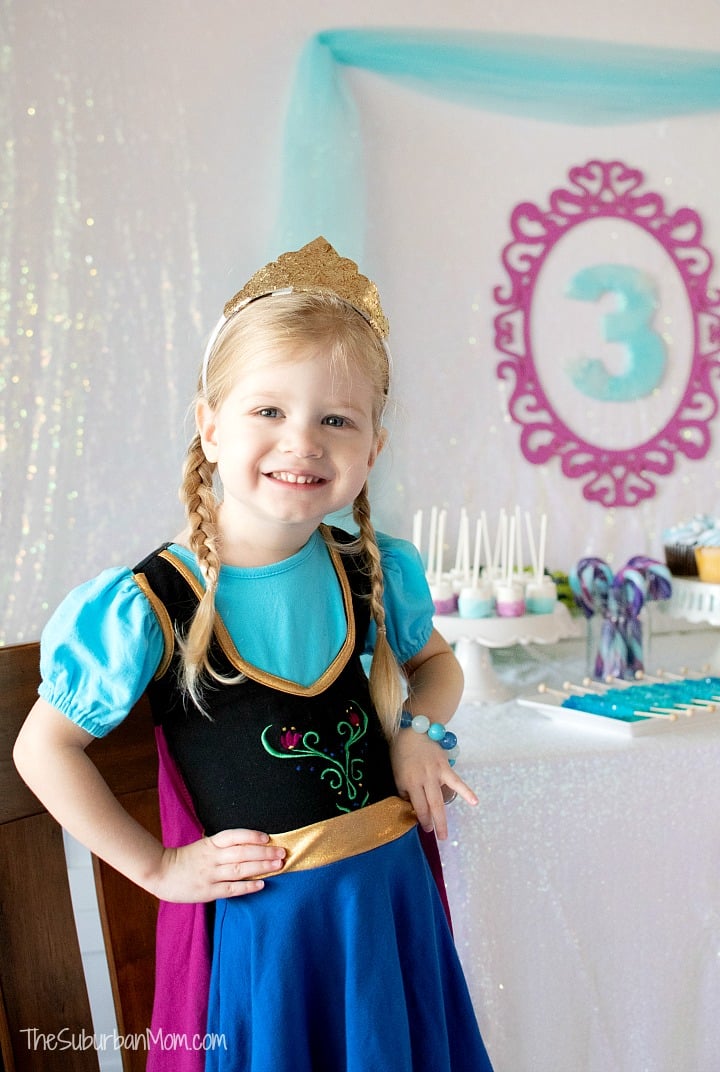 I designed her Frozen birthday party invitation using Anna and Elsa’s silhouette. I had plans to incorporate the silhouettes in other places throughout the party, but as plans progressed I dropped those ideas. To make sure I had clear graphics for the Frozen invitation, I purchased the clipart from Etsy.

We adore Olaf, and “When I Am Older” is one of our favorite songs. So I thought the line, “Cause when you’re older, absolutely everything makes sense” was perfect for a birthday invitation. Because wouldn’t that be amazing if it was true 🙂 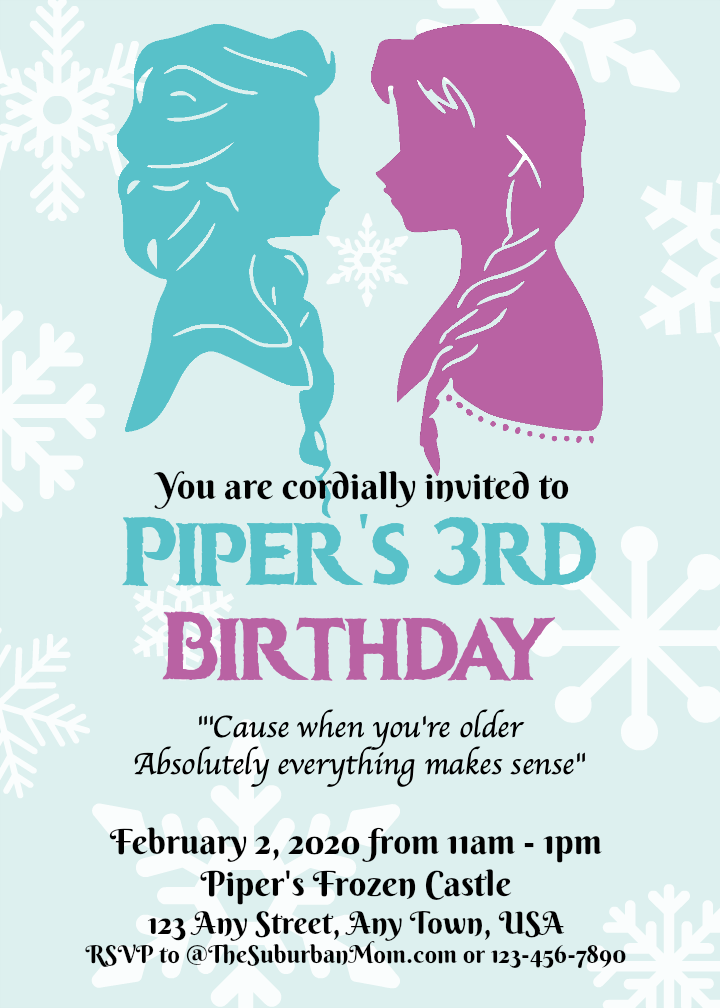 The focal point of the party was the table set up. The shimmering sequin tablecloths (reused from her Unicorn birthday party) made for the perfect icy backdrop.

Because I wanted to avoid using too many characters throughout the party, I used a lot of symbolism. The glitter tulle (from JoAnn’s) used on the background, the table and by the entry isn’t just pretty, it was also meant to symbolize the river full of memories from Frozen 2. 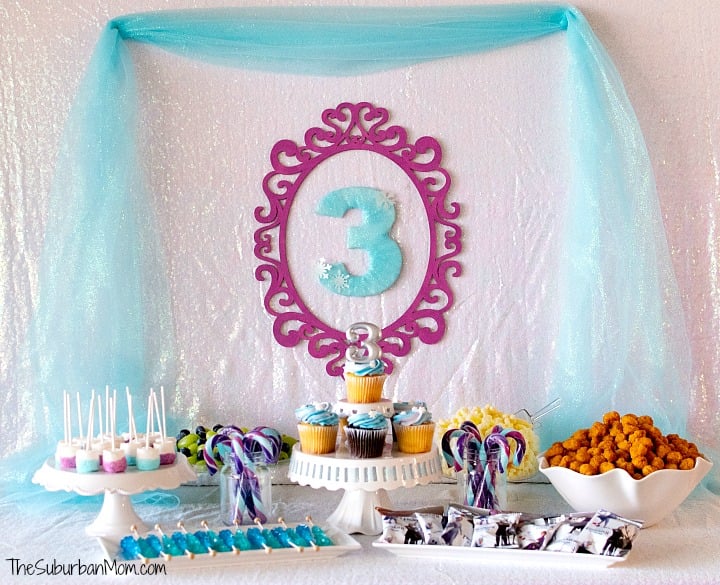 My frozen birthday party table decoration ideas included giant snowball centerpieces were a last-minute addition to the party. I love tissue paper balls because they are so easy to make (Google tissue paper pom pom – so many tutorials). I used white tissue paper that I had at the house and made all three in minutes. After the party, I snipped the ribbon holding them together and I will reuse the tissue paper in gift bags. So it is a very green craft too! 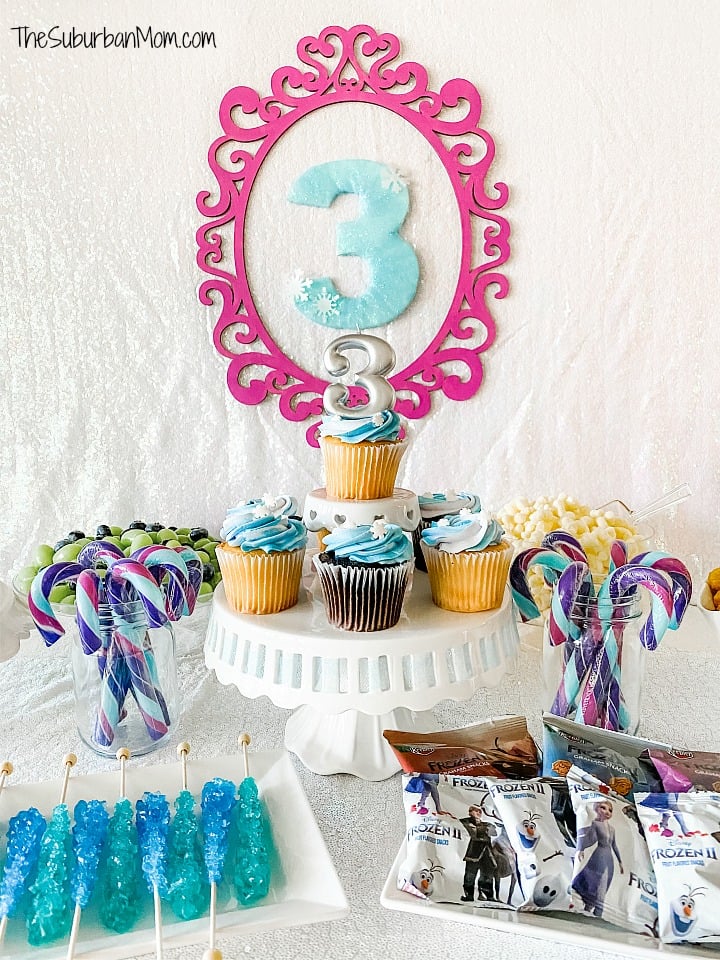 The purple frame is a laser-cut frame from Michael’s. It came unfinished so I painted it to match. It is a double-sided frame, so I plan to paint the other side for another party. I cut the number three out of a snack box and painted it white before wrapping it in strips of the same glitter tulle. Then I cut vellum snowflakes with my Cricut and attached them with a spot of glue.

In full disclosure, I have to share my cupcake disappointment because I think it is important for other moms to know that no party is perfect. I had a very specific vision for the Frozen cupcakes. I printed a photo I found and even wrote on the photo to make sure the colors were pastel, not dark. Well, the bakery failed me — big time. 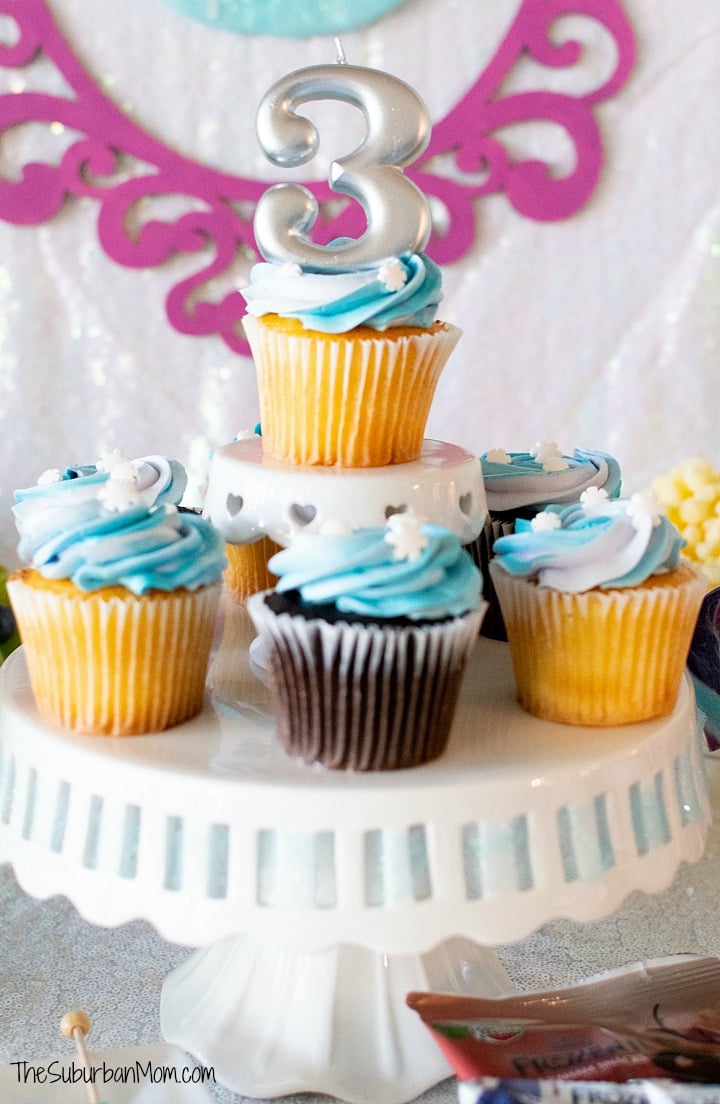 These look NOTHING like the image I provided (which they said they could do no problem). Honestly, they aren’t even iced well. Some of the other cupcakes (not on display) look like my kids iced them. I had a bakery do it because I didn’t trust my icing skills, but if I had time I would have wiped these clean and started over. But I trusted the baker and my husband picked these up for me just before the party with no time for a backup. So that’s my lesson for next time — pick up the cupcakes the night before. 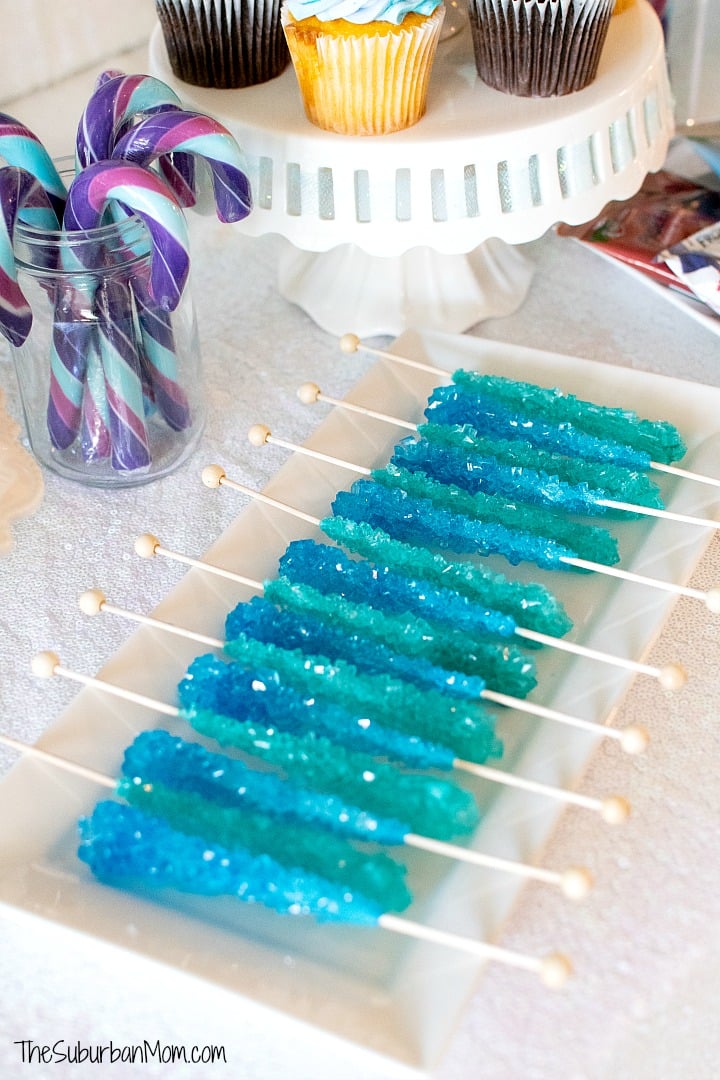 On the other hand, I love the Frozen ice rock candy and the Frozen candy canes (a Christmas clearance find). And the Frozen marshmallow pops turned out perfect. 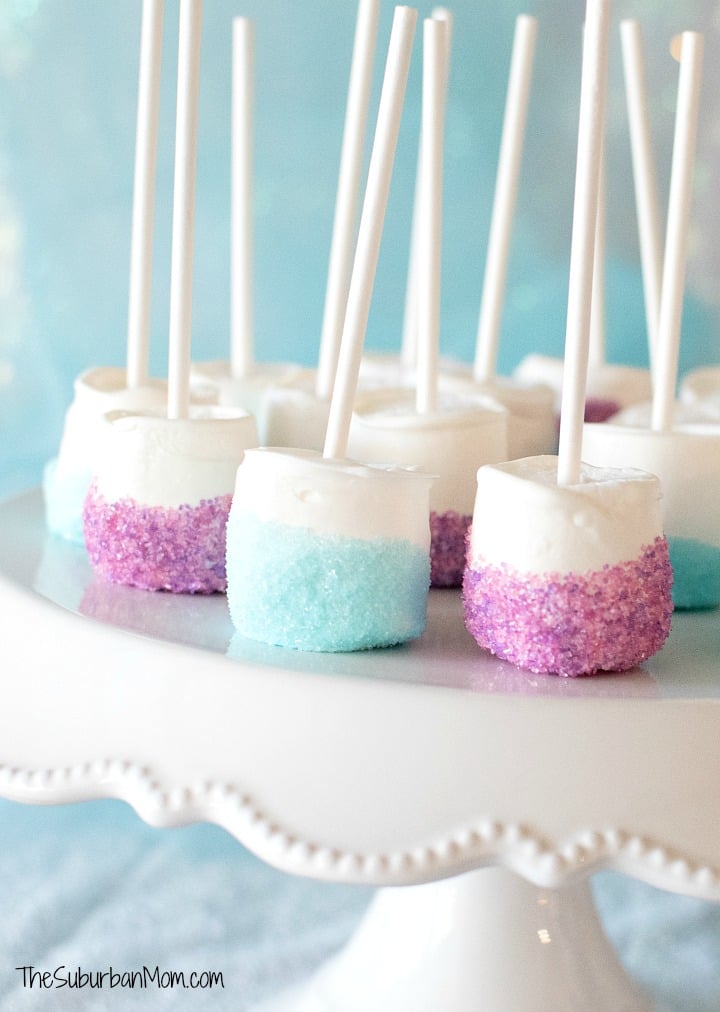 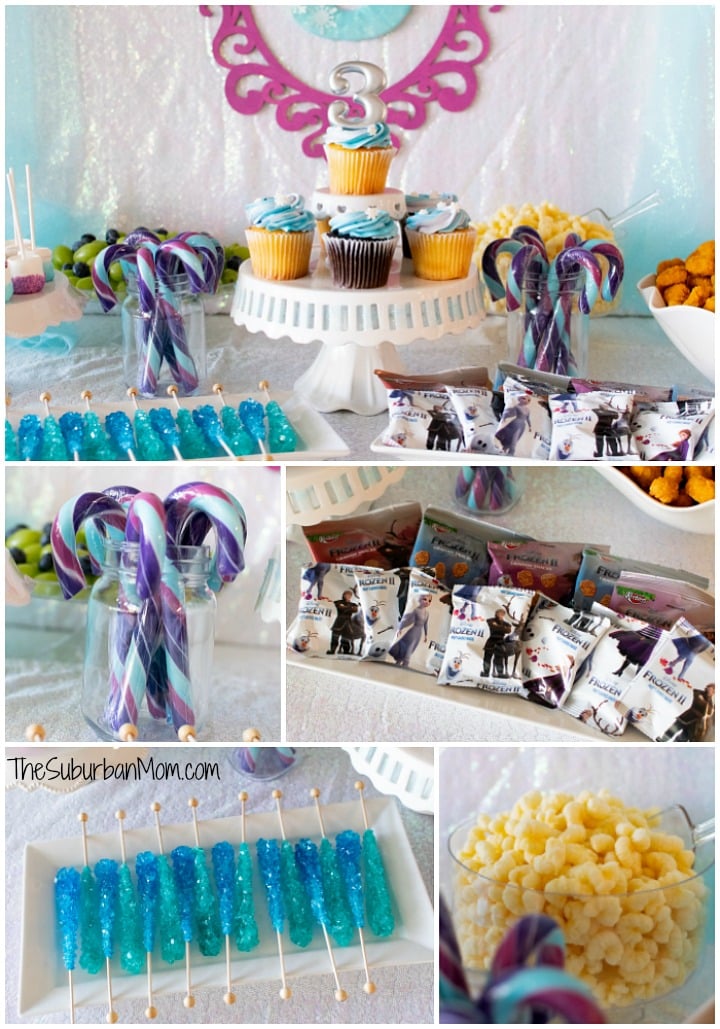 Over at the party favor table, I turned my gallery wall of family photos into a Frozen gallery wall. The one place I allowed Frozen characters at the party. LOL. I do this for most of my daughters’ parties because it is so easy! I searched for Frozen images on Google, cropped them to 5×5 inches and then printed them at home. Rather than opening up the frames, I just tape them directly to the glass and it instantly transforms the wall. 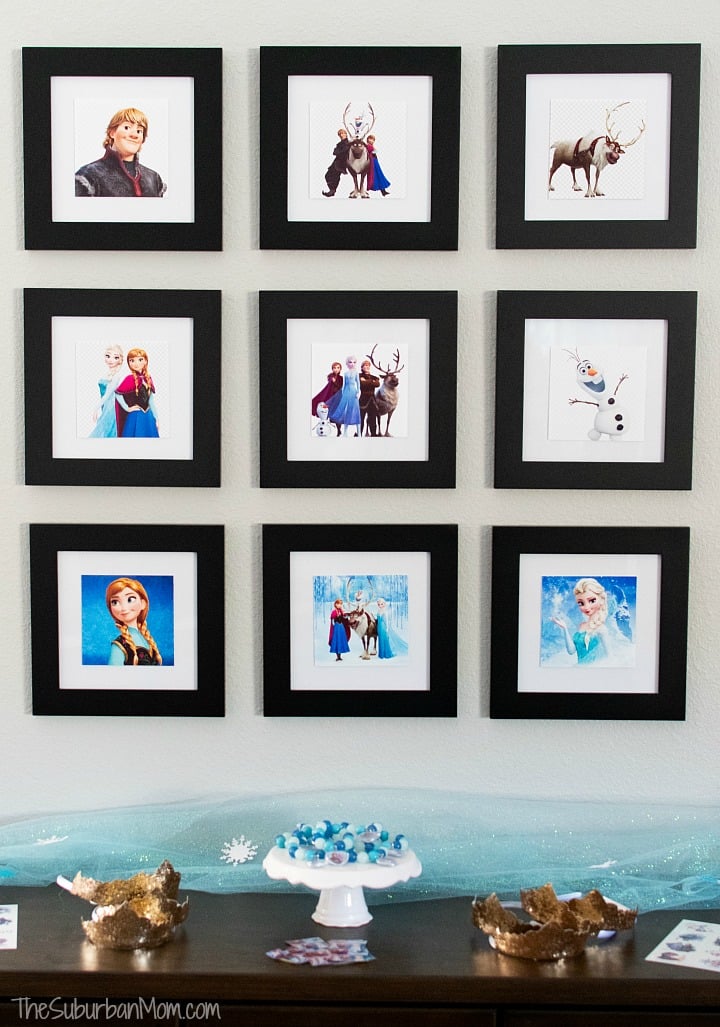 My daughter loves to accessorize. So I decided Frozen accessories were the perfect Frozen party favors. I try very hard to have non-junk party favors. Things the kids will use again and again, instead of being thrown out the moment they get home. Hopefully, I succeeded with the Frozen bracelets and DIY princess crowns.

I was very excited to find the beaded Frozen 2 bracelets from Party City. I know my daughter will get a ton of wear out of hers, hopefully, the other girls will too. 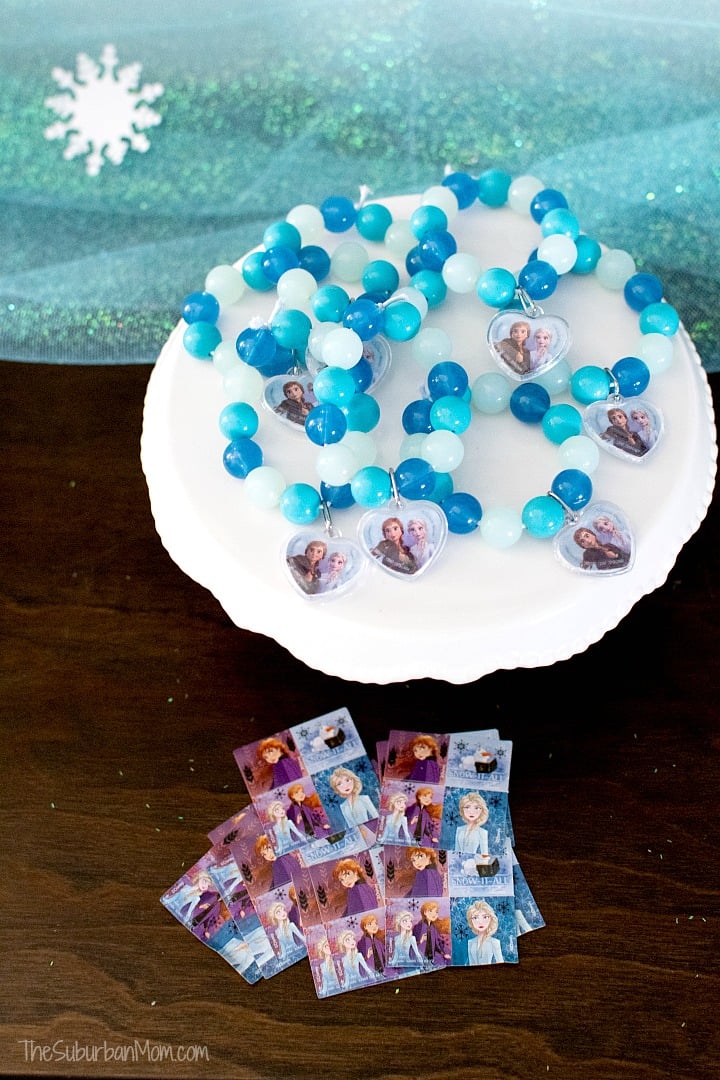 I looked at a lot of store-bought crowns, but over the years we’ve had so many that either broke easily or hurt my daughter’s hair. So I decided to make them. I used a soft headband and made them sturdy enough to stand up to dress-up play. My daughter has worn hers every day since the party.

Learn how to make your own DIY Princess Crowns with my tutorial. 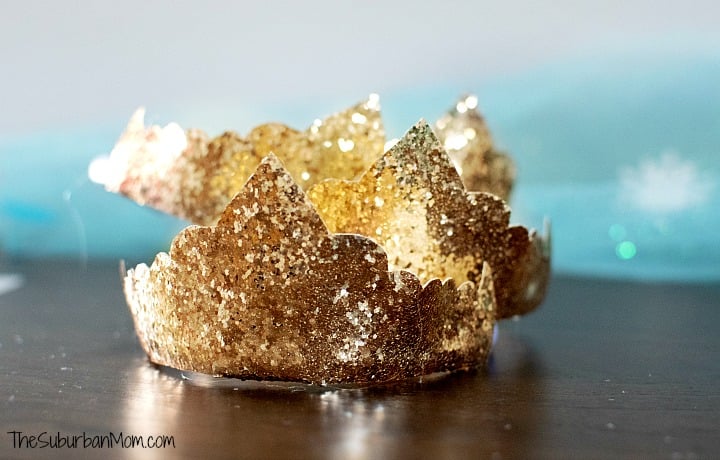 I also offered Frozen stickers and Frozen tattoos at the party because my daughter loves both.

With the exception of my oldest daughter’s shirt (that we found on clearance at Target), I made the rest of the shirts myself using my Cricut. This was my first big venture into making sure so I am pretty darn proud of them. I also love that they are shirts we will all wear again. If you’ve never made your own shirt before, I think the key is to start with a nice shirt you will actually want to wear. (Mom and dad’s blank shirts are from the men’s section at Target, the blank girl shirt is from Old Navy.) 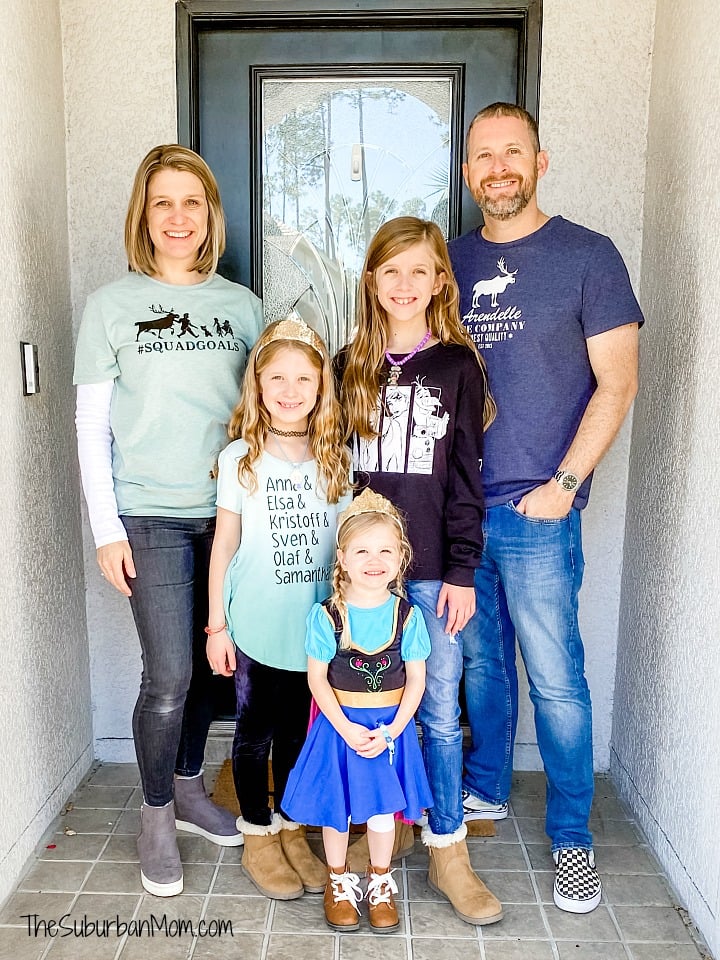 Find the tutorials for each of the shirt:

My daughter’s Anna dress is from a small shop that does limited releases. They are beautiful and comfy, but once she sells out they are gone. If you are looking for an Anna (or Elsa) inspired dress (not costume), check out these beauties. 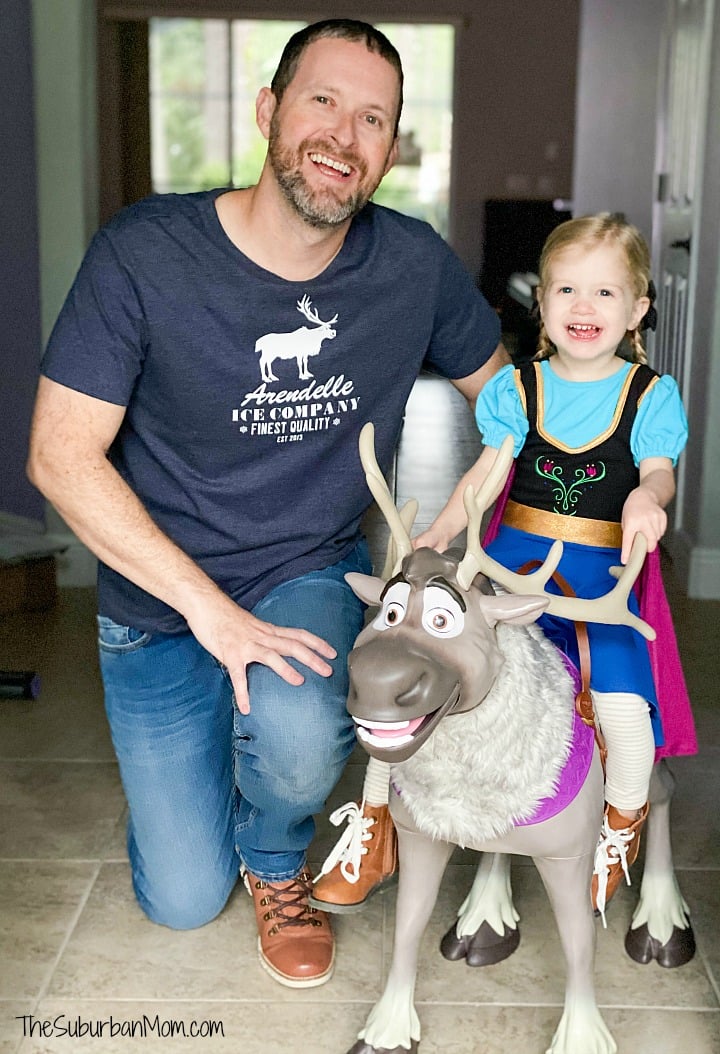 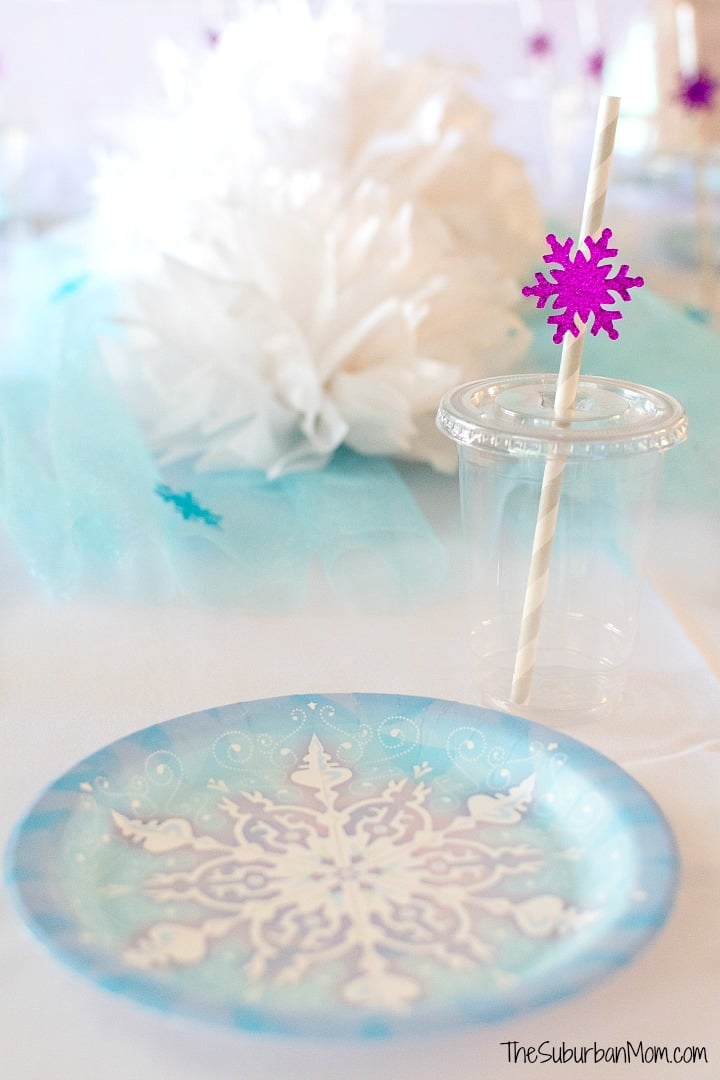 *The Frozen candy canes were a Christmas clearance item at Party City.