For everyone who has ever dreamed about spending their holiday break at Hogwarts, Christmas has finally arrived. New for 2017, Universal Studios launched a full Wizarding World of Harry Potter Christmas celebration, and it was just as magical as you would expect. Complete with snow-capped buildings, warm Butterbeer, holiday gifts and a new show, it’s a whole new way to experience Harry Potter at Universal Orlando.

This post is sponsored by Universal Studios, but all of the magical fun was our own.

It has been several years since my family has visited Universal, and while my husband and I had an adult day in the Wizarding World in the fall, our Harry-Potter-crazed daughter had never been. So taking her to visit Howarts at Christmastime dressed in her best wizarding robes was epic. (Despite the pink jacket that was necessary for warmth.) 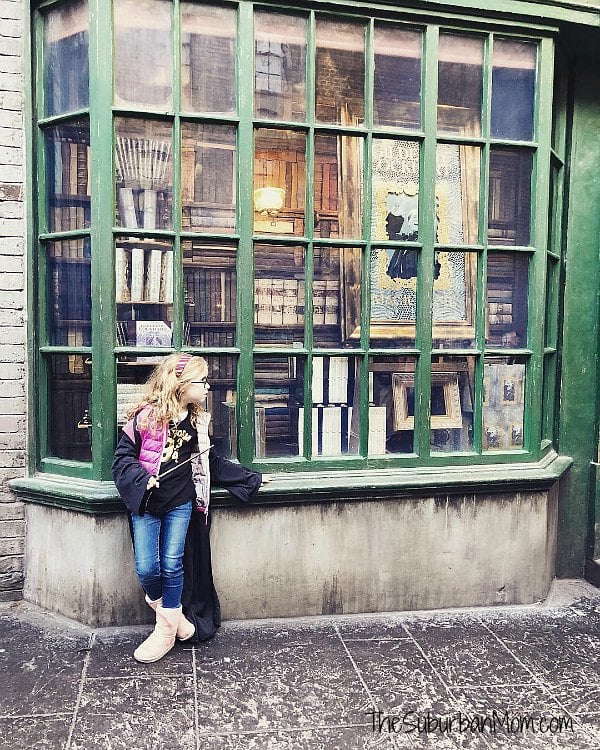 We arrived on Digon Alley on the very last day of the Wizarding World of Harry Potter Christmas celebrate. So while the event is over for this year, now is the time to start making plans to spend your Muggle holiday in the wizarding world. Judging from the success of the Christmas celebration, I have a feeling it will be even bigger and better next year.

All along Diagon Alley, the windows are strung with greenery. If you look carefully, you will notice that every shop’s Christmas decorations also fit the theme of the store. Spindlerwraps’ yard Christmas balls are a great example. It is really a neat touch that makes each shop even more unique. Although we left before dark I imagine it is quite pretty with the garland lit up at night.

Even Kings Cross Station is decked out for the holidays with greenery and various carts filled with packages now topped with holiday gifts in brightly colored paper.

Over in Hogsmeade, the decorations are more dramatic with all of the buildings draped in snow. My Floridian kids were pretty impressed with this sight. The garlands and lights continued, and since we spent time after dark in Hogsmeade I can tell you the twinkling lights are lovely. 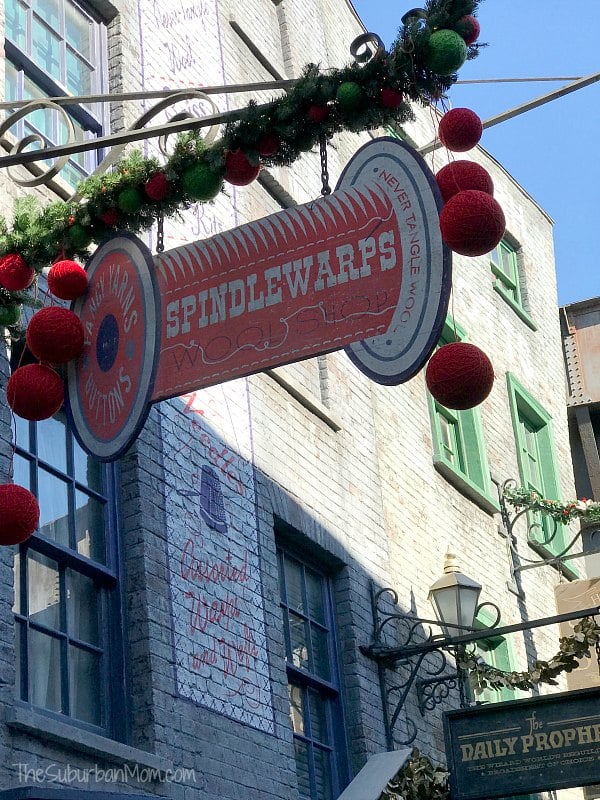 Both Diagon Alley and Hogsmeade are lined with wizarding shops straight out of the books, and this year Christmas-themed merchandise added to the festive fun. Beautiful Christmas ornaments (representing every house), stockings and stocking holders were just some of the seasonal additions. I love picking up ornaments to remember special trips, so I was quite excited to explore the ornaments.

You can purchase some of the seasonal items on the online Universal store. I don’t know if they will remain in the store year round, but they are there now.

Although scarves, robes and knit caps are available year round, they seem even more perfect during the holiday season. Especially on a chilly day like the day we went. 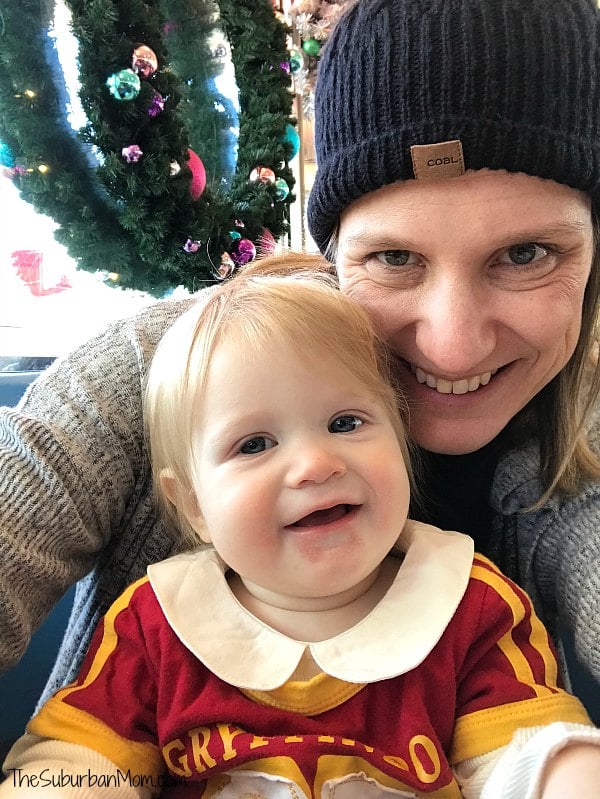 Once you step foot into the Wizarding World of Harry Potter, even the food has a magical spin. They don’t serve soda and plain water instead you will find Gilly Water and Apple Cider on the menu. To add to the Yuletide feel, seasonal dishes were added to the menus at Hogsmeade’s The Three Broomsticks and Diagon Alley’s The Leaky Cauldron including a Holiday Feast, Christmas Pudding and Butternut Squash Soup (Leaky Cualdron only).

And for the Butterbeer fans, Christmastime is the only time you can enjoy hot Butterbeer. A delightfully warm and sweet treat. (Don’t worry regular, frozen and ice cream Butterbeer are still available too.) 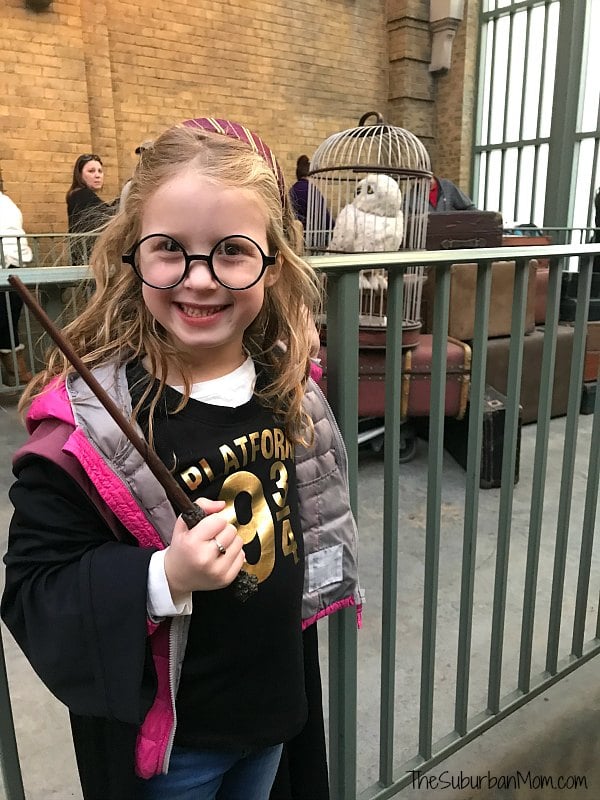 The Magic Of Christmas At Hogwarts Castle Light Show

The highlight of the Christmas theming is The Magic of Christmas at Hogwarts light show. The show is about seven minutes long. The first show starts at 6 pm and starts again every 20 minutes until the park closes. It really is a beautiful light show to watch in person. But I will forewarn you that the logjam of crowds trying to see the show is a bit of a mess. (We also went on the very last night, so it was especially busy with everyone trying to make sure to catch the show.) 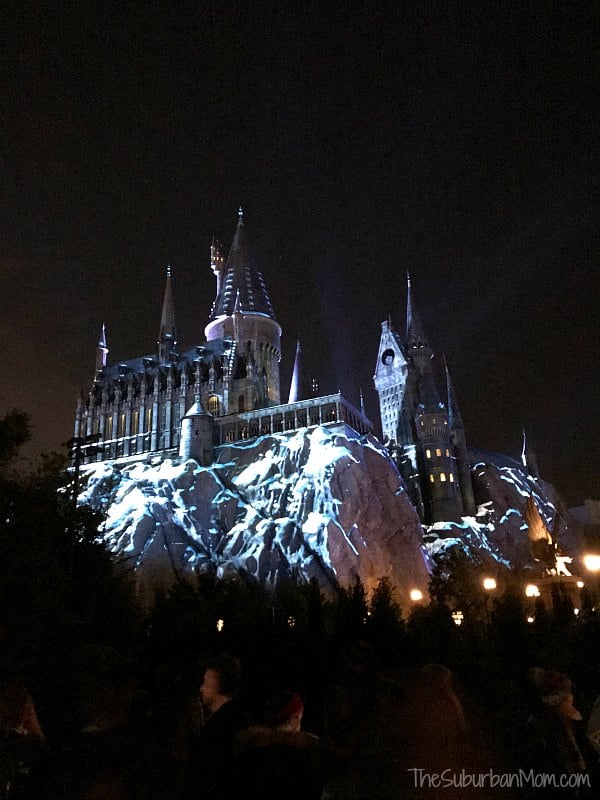 In case you can’t wait to see a peak of the show, I filmed the whole show for you to watch from home. But it really is even more beautiful in person. (Stick with me through the first little bit, baby girl decided to start fussing, but my husband took over and the rest of the video is still and she is quite.)

In addition to the projection show, guests can enjoy seasonal performances by the Frog Choir in Hogsmeade. We missed the show, but next year I really want to see this for myself.

In Diagon Alley Celestina Warbeck, the Singing Sorceress, serenades guests with her top Christmas songs like “My Baby Gave Me a Hippogriff for Christmas.” 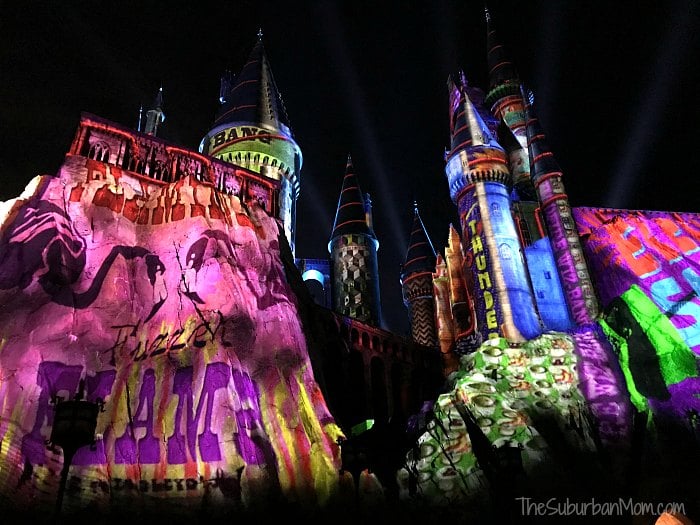 Should You Wear Magical Attire?

Florida experienced an unusually cold start to the new year, and the day we went the high was only 51 degrees. So it was quite chilly for us Floridians. While it is very common to experience temperatures in the ’80s in December, it is cooler than summer months.

From the moment I created my daughter’s Hermione costume for Halloween, she planned to wear it to the park. Luckily, it was chilly and the wizard robe was a nice additional layer to keep her warm. Also the perfect day to buy scarves and hats featuring your house colors.

Our whole family was dressed in our magical best, the baby wore her Potter jersey, I had Harry Potter socks and even my husband wore his Fantastical Beasts scarf. If you have magical attire, I highly recommend it for any trip to the Wizarding World. If you don’t, you will find that the shops in both parks have plenty of magical threads to choose from. 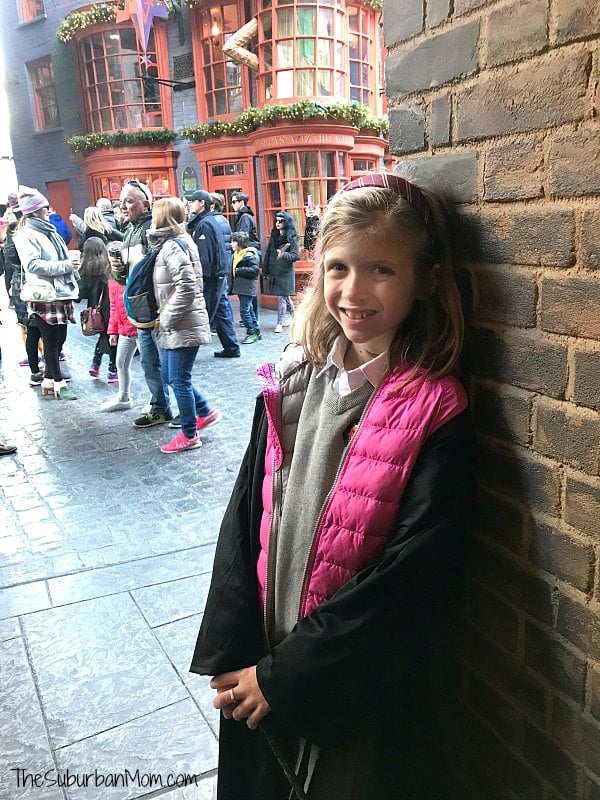 Our first family visit to the Wizarding World of Harry Potter will not be our last. There is so much to see and do, its hard to fit it all in one day. We did a lot, but there are many more things we can’t wait to try next time.

Here are my final tips from our first visit: 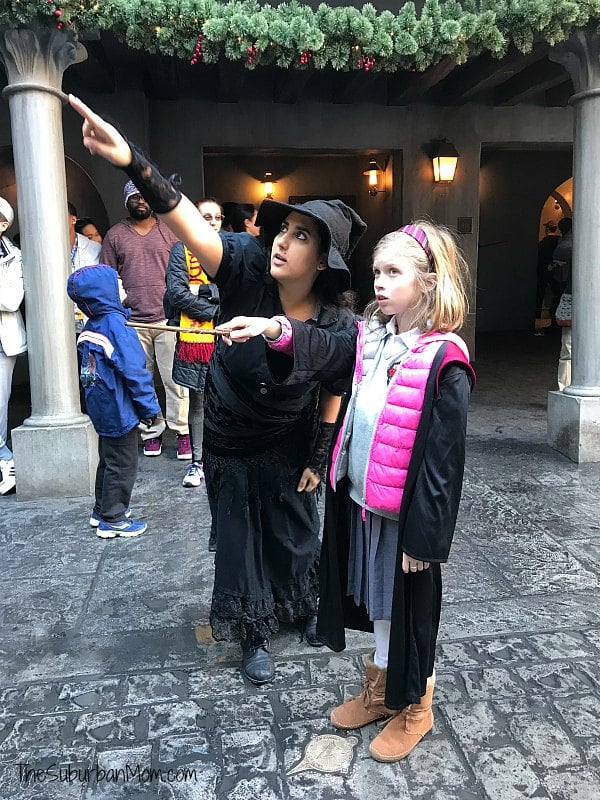