When I began to plan my daughter’s 3rd birthday party, there was only one option — she wanted a Toy Story Birthday Party. And from the moment I agreed to make her Toy Story party dreams come true (approximately last January for her October birthday), she told everyone she met, “I am going to be three, and I am going to have a Toy Story  Birthday Party.”

Don’t miss my Free Toy Story Party Printables and find tons of inspirations on my Toy Story Pinterest Board. I spent months searching for Toy Story birthday party ideas, taking notes and planning my approach. Finally it was time for the big party, and I believe it was everything my spunky three year old dreamed of. The Toy Story party invitations were inspired by Sissy’s “best friends” Woody, Jessie and Buzz and set the tone for all of the other party decorations. Of course, I had to make coordinating Thank You notes. I spent many late nights crafting the perfect details from Sissy’s favorite Toy Story moments for the party including The Claw. This DIY Claw was a labor of love. Crafted out of foam board and covered in aluminum foil, it turned out exactly how I wanted, but took a lot more time! Ever Claw needs Green Aliens, so my Claw had a Bucket of Aliens to “grab.” Since I planned to serve lunch at the party, a DIY Pizza Planet Sign was a must. I searched all over for the right logo, and finally ended up having my husband help by creating a vector file so I could print it big enough for the sign. To make your own, download the Pizza Planet Logo. The rocket ship is cut out of cardboard, which I spray painted red and white. Then I glued the printed logo on the sign and used a layer of Mod Podge to seal my double-sided sign. (Yes, it is a double-sided sign.) I think my favorite part of the whole party was how cute Sissy was in her Jessie Costume. The shirt says, “Cowgirls Rock,” and she spent weeks repeating that saying. Before the party I took photos of Sissy in her Toy Story party outfit, and I found the cutest Toy Story picture frame to display it at the party. (It was also one of her favorite birthday gifts!)

I decided not to do any organized games for the little ones, but I did have a couple of Toy Story games available to play for the bigger kids to play on their own — Toy Story Mania for the Wii and Toy Story Ker Plunk (I found Ker Plunk at a local consignment shop).

For favors each kid received a Toy Story Pez dispenser tied with a Toy Story Thank You tag. I also lucked out and found red foam cowboy hats at the Dollar Store (for Halloween). With a hole punch and two sizes of white ribbon I was able to transform them into Jessie hats for all of the girls. (And one black Woody Hat for the loan boy.) Pizza wasn’t the only thing served at our Pizza Planet. The birthday lunch included: Update for Toy Story 4, these Forky Cupcakes would be perfect for a Toy Story Party! 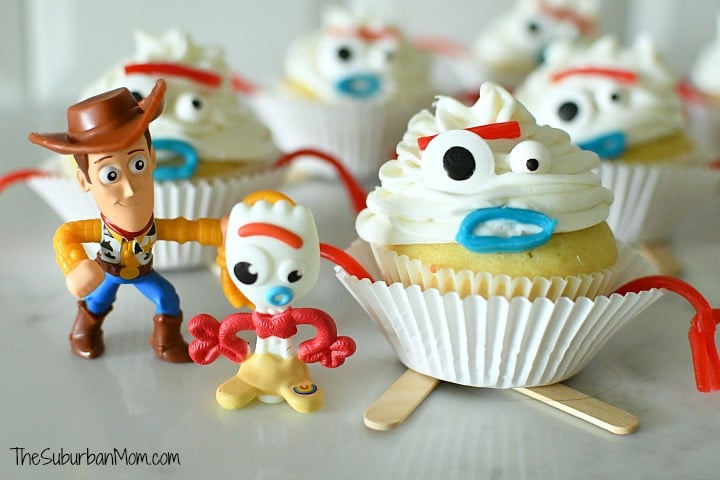 Out of all of my projects for the party, the Mr. and Mrs. Potato head craft project was the most time-consuming to prep. My sweet husband spent many nights tracing and cutting out parts on my behalf while I worked on other projects.

You never know how well an idea will go over with kids, so I was crazy excited that the kids adored the project. Every single kid sat down to make Mr. and Mrs. Potato Head. It was awesome.

Make your own Mr and Mrs Potato Head craft with printable parts. I love to use photobooths for a party because they are a natural way to take pictures of partygoers and make a great memory for everyone. I created a photobooth background by taping white clouds on my blue wall. (If you don’t have a blue wall, you can get the same look by taping up a blue tablecloth.) There were a lot of little details that made this party special.

For now, don’t miss the 12 Toy Story Coloring Pages I rounded up.