One race, and we are hooked. I get it now. I get the hype, the excitement and I get the drive to do more. runDisney races are fun. We experienced our first runDisney Kids Races (with all three kids running) and the first thing the kids asked when we got back to the car was, “When’s the next runDisney Kids Race?” We didn’t really know what we were getting into before the race, so today I am sharing 10 runDisney Kids Races Tips For First Timers along with a ton of pictures of our super fun day.

This post was sponsored by GoGo SqueeZ and runDisney, but the hard work was all my kids.

Because this was our first runDisney event ever, we had a lot of questions. Luckily, my friend from GoGo squeeZ was able to walk us through all of the important details. For those who don’t have a resource like mine, I wanted to share some of the important things I learned for other parents who want to register their kids to take place in the runDisney kids races. 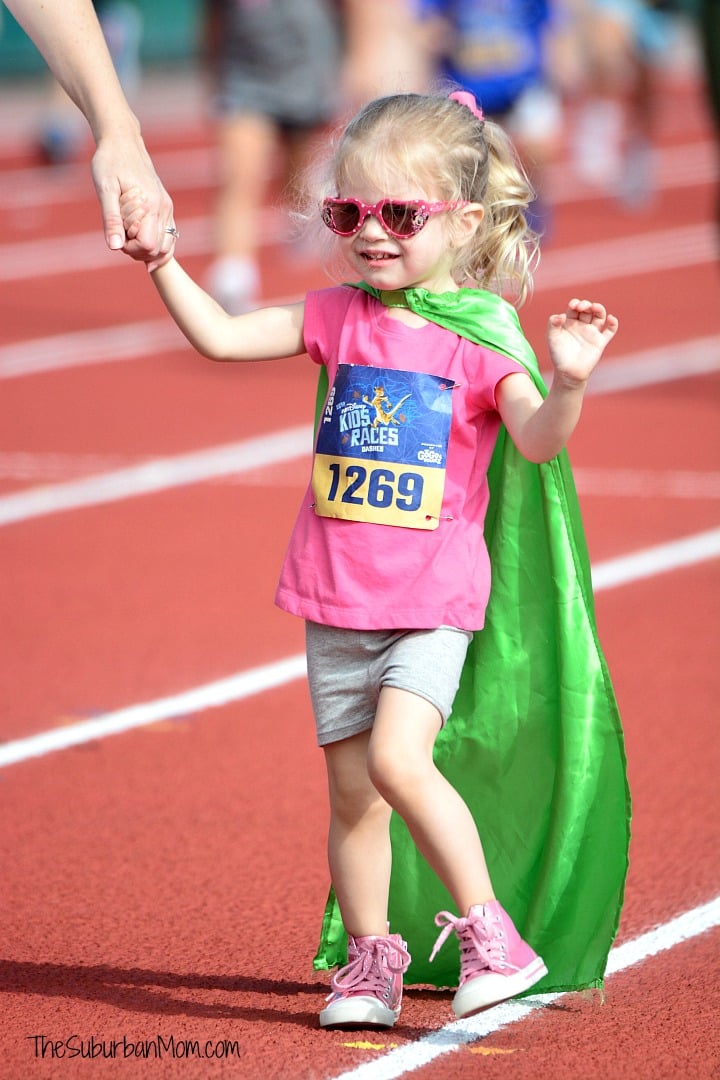 Register Early For A Personalized Bib

Unlike the large runDisney races, runDisney kids races do not sell out in minutes. In fact, while we were at the Wine and Dine race my girls started making plans for future races and there were still spots in the dashes for all of the upcoming races and spots in the Star Wars one-mile race. However, there is a benefit to registering early — your kids’ name on their race bib. 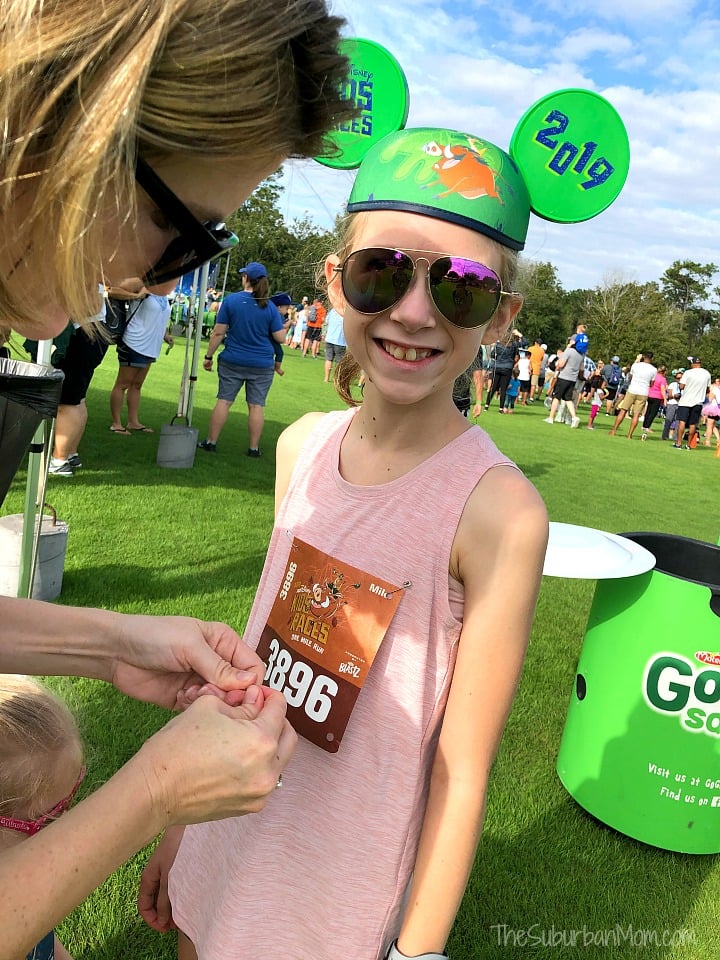 I was surprised to find no merchandise available for sale for the kids races. None. Luckily, our friends at GoGo squeeZ thought ahead and preordered Commemorative Mickey Ears. My kids were so excited about their ears, they raced with them on. We were asked several times where to buy the ears and parents were always disappointed to learn that these are only available for presale. So be sure to preorder them. 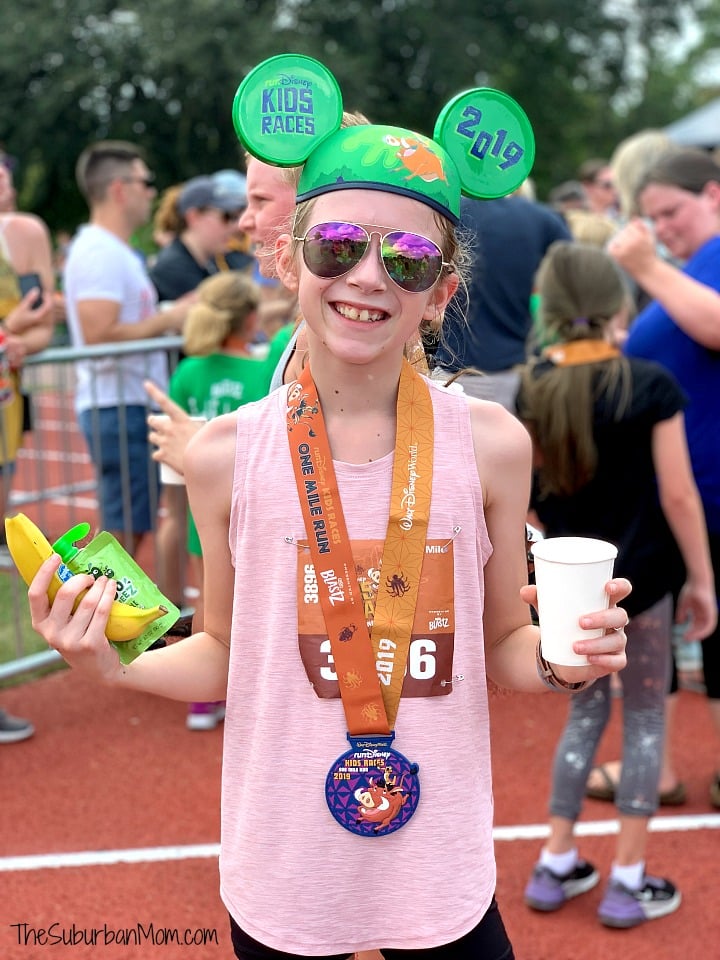 How Much Does It Cost?

I was pleasantly surprised to learn how affordable the kids races are. It costs $20 for each of the dashes and $30 for the one-mile race. The price includes race entry, race bib (personalized if you register early), a t-shirt, a medal and all of the water, GoGo squeeZ and bananas you can consume. It also includes a HUGE sense of pride when your kids finish the race and tell you how proud they are of themselves!

Since none of us have ever participated in a runDisney event before, we weren’t quite sure what to wear. The answer is — anything you want. There were kids in Disney gear, kids in stylish athleisure attire and kids in regular street clothes. MANY kids opted to wear the free runDisney shirt they received with registration, including my middle child. I say dress your kids in whatever makes them happy. Our youngest even ran in a GoGo squeeZ superhero cape. (Note, I would expect to see a lot more princess related attire for the Princess races and Star Wars attire for the Star Wars races.) 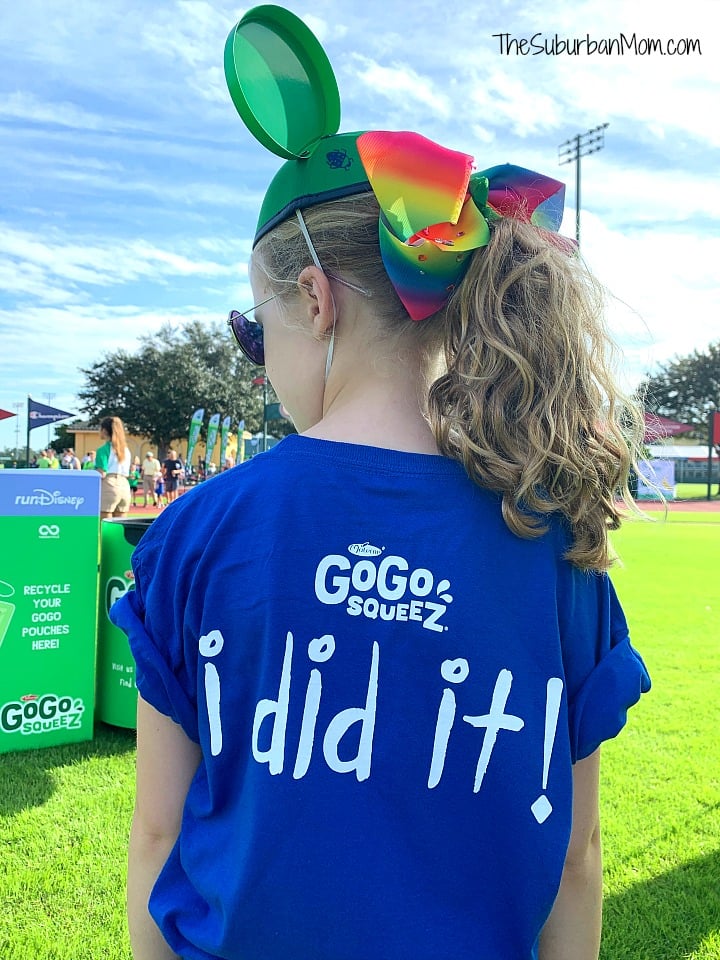 There are four race weekends each season, and there are kids races to correspond with each weekend — Wine and Dine Half in November, Walt Disney World Marathon Weekend in January, Princess Half in February and Star Wars Half in April. The kids races are held at the ESPN Wide World Of Sports complex and take place at 10:30 am (100-meter dash), 11:30 am (200-meter dash), 12:30 pm (diaper dash) and 1 pm (one mile).

Race day at runDisney kids races is exciting with a DJ playing fun music for kids to dance to, lawn games like hula hoops and beach balls, coloring stations and more. Sponsored by GoGo squeeZ, runDisney kids races are like a big party with lots of GoGo squeeZ to snack on. GoGo squeeZ even sets out large shade tents and folding chairs to rest in between events. At the start of each race, the kids get going with a shout of, “Ready, Set, GoGo!” 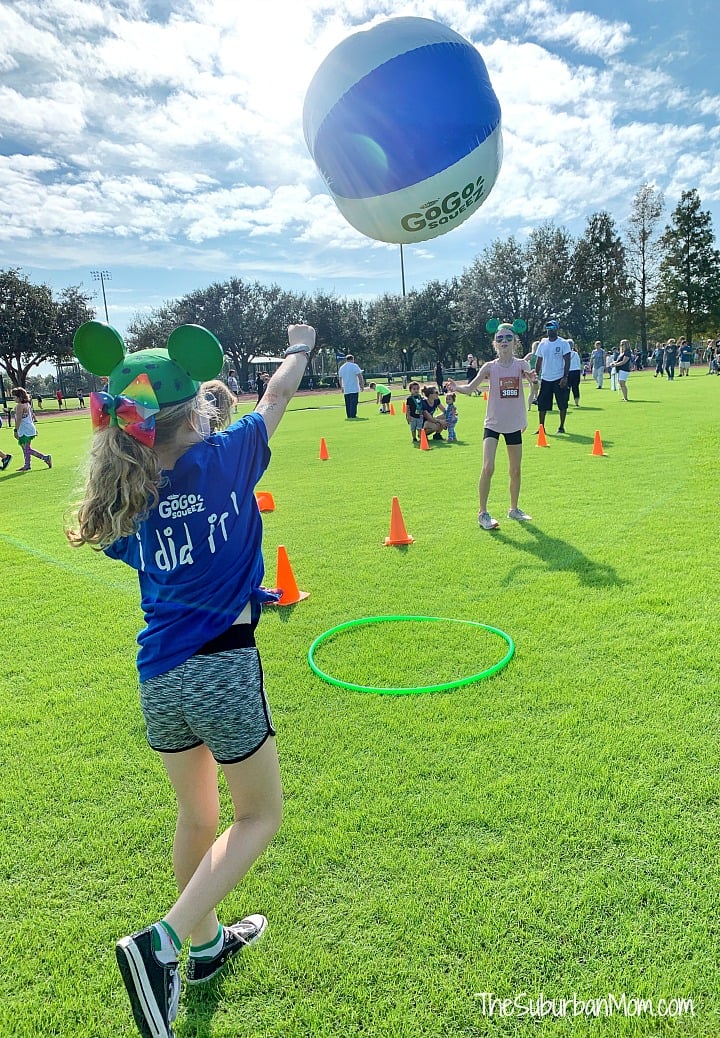 Kids Can Run Again And Again

Your kid had so much fun they want to run again? No problem! runDisney kids races have staggered start times throughout the hour. There is no official line up, kids just hop in line and go. Our middle child decided she could do better if she tried again, so she did and she loved it. On that note, while there was a huge crowd to run at the start of each hour, later in the hour there was hardly anyone running. And since it doesn’t matter when you run, you might want to hold back just to avoid the crowd. And because Mickey and Minnie take turns high-fiving kids on the track, your kids might want to run a second time to score another five. 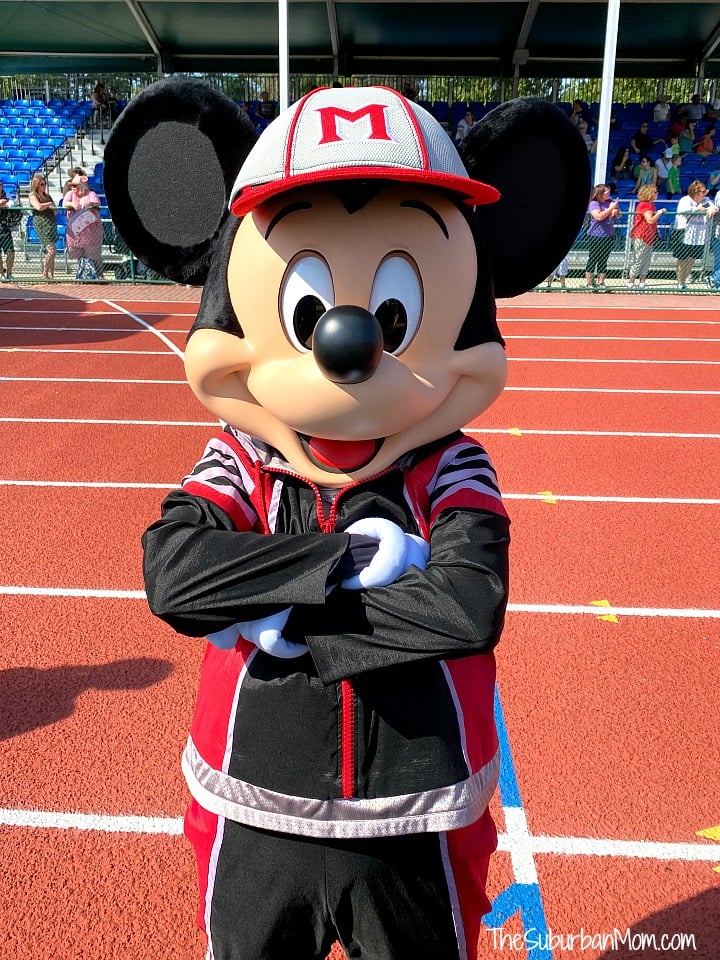 You Can Run With Your Kids 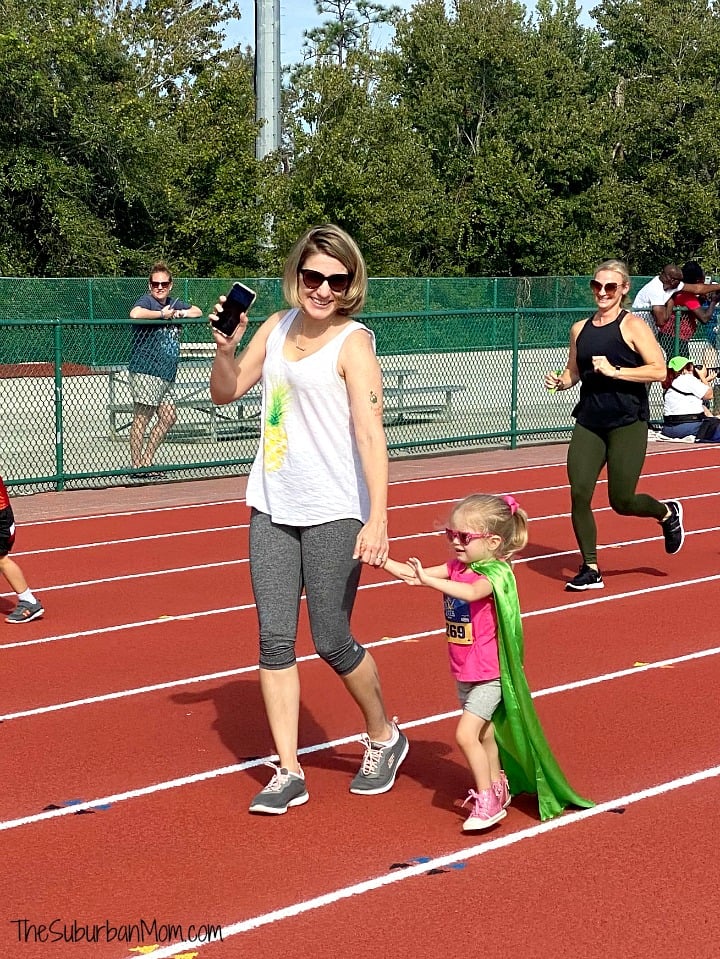 If you don’t plan to run alongside your kiddo, it is extremely helpful to have someone at the start line to wait with your runner and someone at the finish line to collect them. Cell service is rocky at best at the race, so coordinating meetups can be difficult via text so make a plan to meet after someone has collected your runner. Just be sure the person at the finish line has the claim tag for your child. 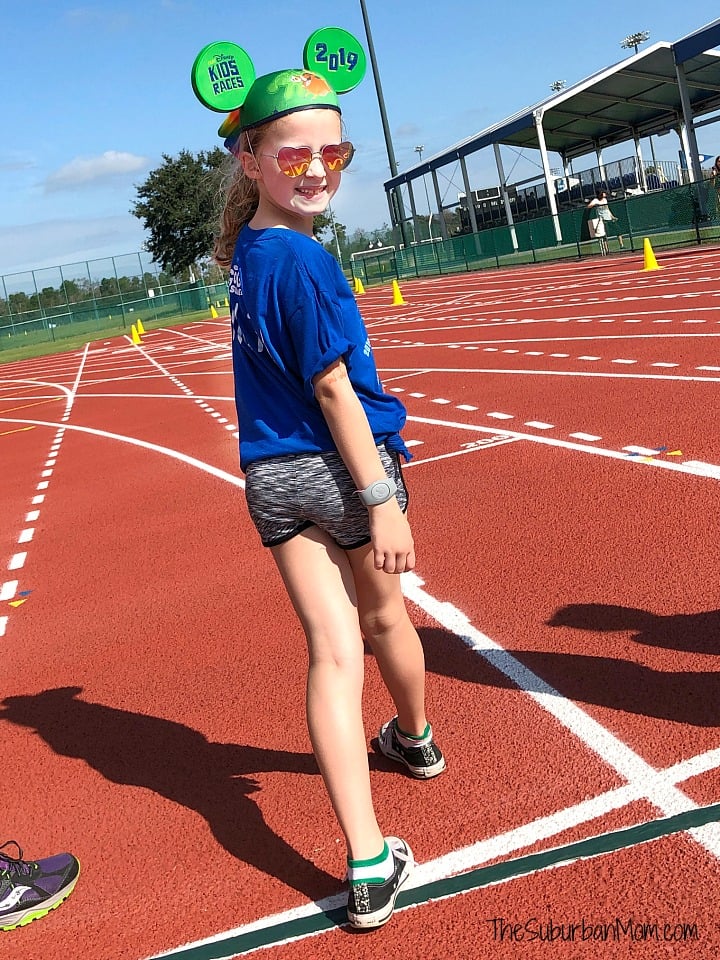 Our kids love to collect pressed pennies, so they were thrilled to find the pressed penny machine with runDisney pennies. The machine is located upstairs outside the runDisney Expo area. There were three penny presses to choose from and my daughters each chose a different one. A fun and inexpensive souvenir to add to their collection. 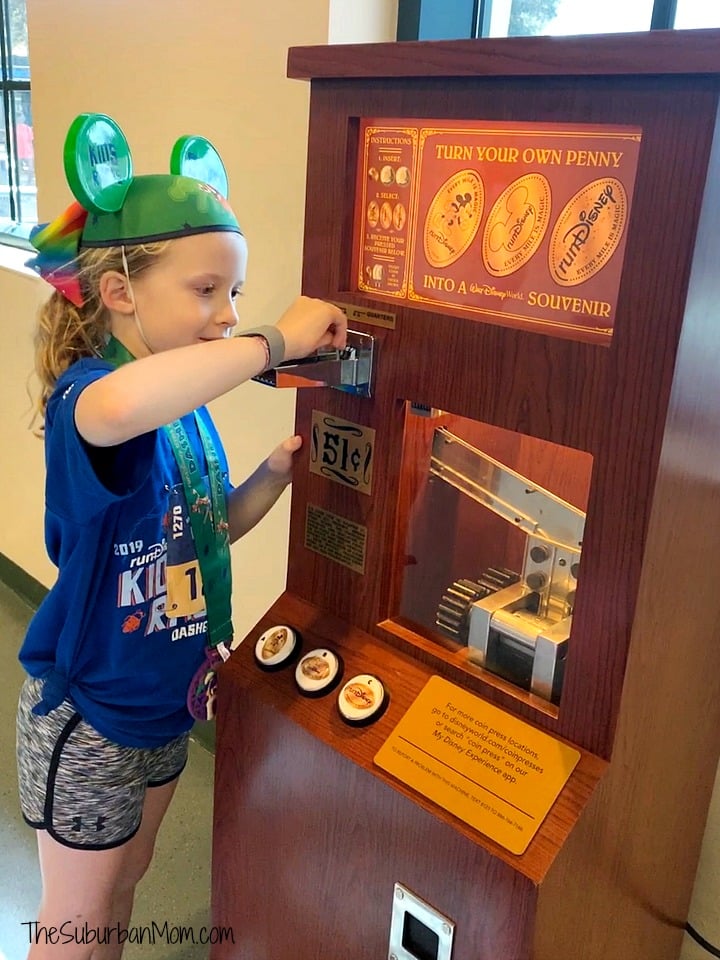 I noticed the photographers at the finish line during the races, but I was so busy taking my own photos that I didn’t pay much attention until a friend asked me about our photos after the race. Luckily, I saved their bibs (which I admit that I did not read the fine print on the back), where the information to retrieve their photos via Disney PhotoPass was located. I was thrilled to find really great pictures of the kids racing — especially our middle who ran twice. Do not miss at least checking out these photos after the race. 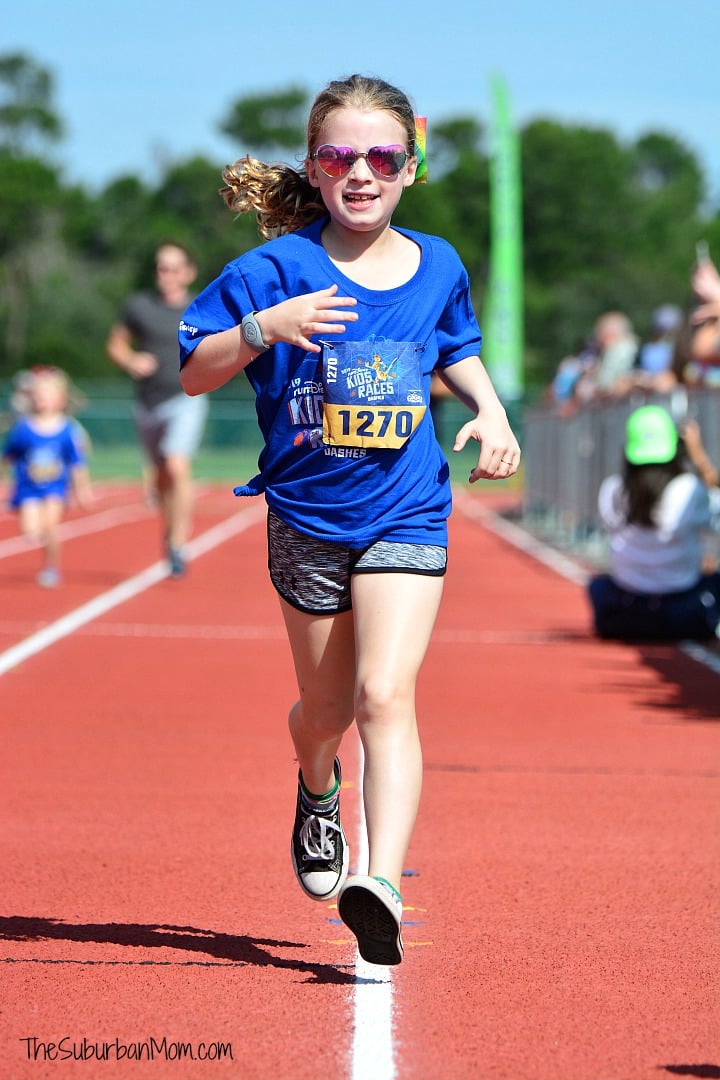 Every Mile Is Magic

So, what’s up next for our family? The runDisney Castaway 5K when we set sail aboard the Disney Dream in December. But shhhhhh…. don’t tell the kids. They don’t know about the cruise yet, let alone the 5K. And then, hopefully, we will be back for the Star Wars runDisney kids race in April. 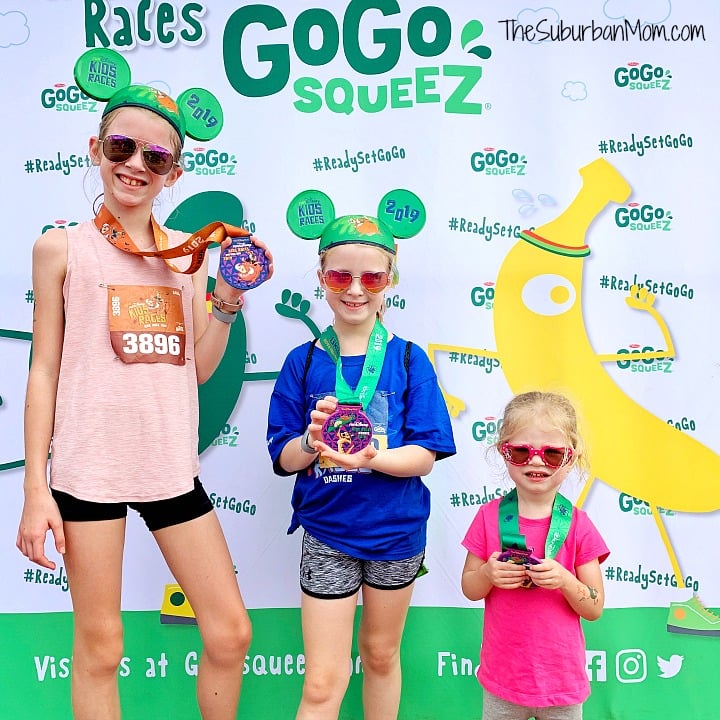