I am really good about making sure my kids get enough fruits and veggies in their diet. Really good. My own diet, not so much so. I often forget to eat lunch, instead snacking on junk later in the day. In an effort to combat the munchies and add in more good stuff, I have adopted a daily routine with my blender. I blend all the fruits and veggies, and in the spirit of the season I decided it was time to spice up my smoothies with pumpkin — voila a Pumpkin Smoothie. Oh yes, it is that time of year when we pumpkin everything. And if you love pumpkin, this smoothie is another great excuse for pumpkin. A yummy way to add an extra banana, pumpkin and even fresh spinach into your diet. I love smoothies!

While some pumpkin drinks have a lot of added fat and calories, this Pumpkin Smoothie stays lean with skim milk and zero-calorie Sweet ‘N Low. I like to use frozen fruit when I make my smoothies. I can never quite get the right consistency when I use ice cubes, they end up chunky. So to make a pumpkin smoothie I started by freezing pumpkin puree into an ice cube tray — one tablespoon per cube.

You could also freeze the banana in chunks, but another benefit to freezing pumpkin in ice cube trays is that you don’t need a whole can of pumpkin, so this allows you to have pumpkin for several smoothies. You can also save 1/4 cup of pumpkin in the fridge to make Pumpkin Nutella Chocolate Chip Cookies — recipe coming soon! When you are ready to make your smoothie blend pumpkin cubes, banana, milk, Sweet ‘N Low and spinach in the blender. (Although I almost always add a handful of spinach to smoothies I did not when I made my first pumpkin smoothie, shown. But for every one I have made since I added spinach. It does not change the taste, but adds some goodness.)

Sprinkle a pinch of pumpkin pie spice on top and enjoy. Yum! Who is ready for fall now? 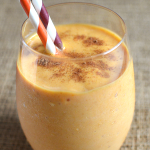