In less than two months we will set sail on our first Disney Cruise aboard the Disney Dream, and I can now check off one thing on my to-do list for the trip — costumes for Pirate Night! (For those who are not familiar with Disney Cruises, one of the most popular nights is Pirate Night when guests aboard the ship dress up, to varying degrees, as pirates.) It’s a Disney cruise after all, so picking out dress up costumes for the girls was easy, without hesitation my daughter selected matching Izzy costumes. But picking out something for mom and dad, who aren’t ready to go for a full-blown costume, that was a little trickier.

Since this trip is all about the kids (or so they think!) the first step was to make sure my girls had the perfect look. Initially I was sure K would choose one of the fancy pink costumes with tulle skirts, but when I showed her the options she went straight for Izzy from Disney Junior’s Jake and the Never Land Pirates. And there was no way she was going to let her baby sister be left out, she insisted on matching Izzy costumes. (Moms of boys, you will find lots of Jake costumes onboard as well as numerous other pirate options.)

The look for my girls: 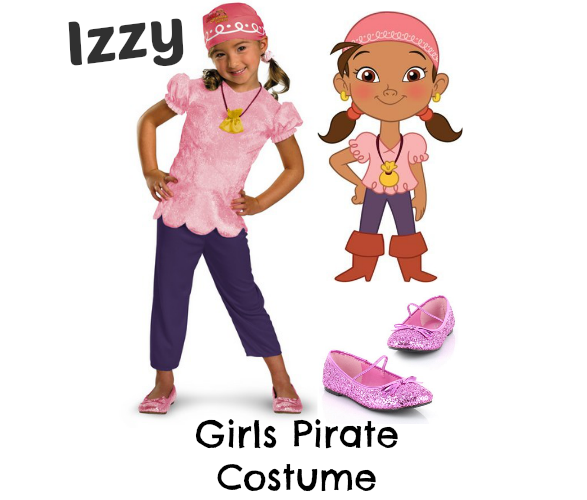 My girls as Izzy: Since there was no way I was going to get my husband in a full pirate costume, I decided I would feel silly in a full costume myself. Although there were some cute options! Last time we were at Disney I found a pair of pirate Minnie Mouse Ears that I had to have, so I settled on a simple white peasant blouse and black leggings with boots and a few accessories to complete the look. A skull and cross bones necklace and bracelet with a pair of giant hoop earrings would do the trick.

If mom doesn’t want to do the costume thing, she can always get a pirate shirt to match dad’s. Next it was time for dad. Keeping things simple, I picked up an eye patch and hoop earring for him to pair his with skull and crossbones shirt. (Or this pirate Mickey shirt really keeps in with the Disney Cruise theme.) I really want to get him a pair of pirate Mickey Mouse ears too, but I am not sure he is going to go for it. So we might end up tying a bandana on his head instead. (Bah-humbug!) While we await our cruise, the girls are having a great time playing dress up in preparation. With pirates on the mind, K woke up this morning and took one look at the box I left in the playroom from a recent delivery and asked if she could make it into a pirate ship. Of course I said yes! A room full of toys and all my girls needed to keep themselves entertained was a cardboard box and some crayons! They went right to work decorating their ship. The next day we woke up to rain – lots of it. Even though I want to keep the costumes nice for the trip, I decided to opt for themed dress-up play instead of TV time. With their new costumes and a homemade pirate ship, my girls were happy to play pirates.