Here’s a great deal for Lord of the Rings fans. Walmart has the pre-order for the Lord of the Rings Original Motion Picture Trilogy on Blu-ray for only $9.86 + $1.97 shipping. The movie also includes $10 of movie money to use on one admission to  “The Hobbit: An Unexpected Journey” in theaters December 14, 2012 too.

Receive Movie Money Towards One Admission Ticket to see “The Hobbit: An Unexpected Journey” in Theaters 12/14/2012. “The Fellowship Of The Ring”: Assisted by a Fellowship of heroes, Frodo Baggins plunges into a perilous trek to take the mystical One Ring to Mount Doom so that it and its magical powers can be destroyed and never possessed by evil Lord Sauron. The astonishing journey begins in the first film of director/co-writer Peter Jackson’s epic trilogy that redefined fantasy filmmaking. “The Two Towers”: Frodo and Samwise press on toward Mordor. Gollum insists on being the guide. Can anyone so corrupted by the ring be trusted? Can Frodo, increasingly under the sway of the ring, even trust himself? Meanwhile, Aragorn, drawing closer to his kingly destiny, rallies forces of good for the battles that must come. “The Return Of The King”: It is time. For Frodo to overcome the wickedness of Gollum, the horrifying attack of the colossal arachnid Shelob and the soul-twisting allure of a ring that resists destruction. For Aragorn to take up the sword of his forebears and the crown of his birthright. For the mighty clash that wizard Gandalf calls “the great battle of our time.” And for the inspired culmination of the films based on J.R.R. Tolkien’s literary classic. For the third time, a “Rings” movie was a Best Picture Academy Award(R) nominee and for the first time it claimed that prize (plus 10 more). “The King” deserves its crown.

Check out the deal at Walmart here. 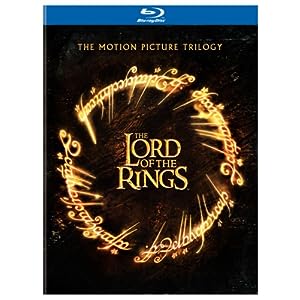