I ♥ Disney, and it is rubbing off on my daughter. Our house is like a Disney Store replica. (Ok, maybe not that much… but we do have a LOT of Disney toys.) And, of course, my daughter’s no stranger to Toy Story. But somehow Mr. Potato Head wasn’t in our toy line up – until now. Why hello Mr. Potato Head, welcome to our home.

When Mr. Potato Head arrived I wondered how he might fair in the sea of pink that is my daughter’s world, but this potato stud fit right in. (Yes, pun intended.) Mr Potato head has been around the block a few times, in fact, according to Wiki the plastic potato like we know today has been around since 1964, and he is still a fun toy even in our high-tech world.

After I initially introduced my daughter to Mr. Potato Head, I left him on the floor. A few hours later, I looked up from what I was doing and found this: Friday night my daughter requested a movie before bed, and we settled on Toy Story 2. As soon as I told her what we were watching she got up from her chair and wandered away. When she came back, she had Mr. Potato Head with her and was ready to watch her movie. Yes, Mr. Potato Head is an oldie but a goodie!

You can find the TS3 Mr. Potato Head on Amazon. 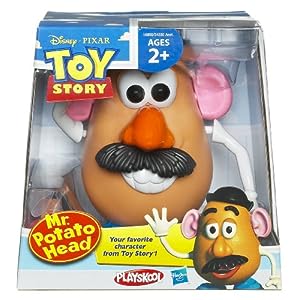 Disclosure – I was provided a Mr. Potato Head to review for this post, however, all thoughts an opinions are my own. No other compensation was received.