If NASCAR and BBQ ribs sound like a winning combination, then let me tell you about the Smithfield Whole Hog Challenge. Throughout the 2015 racing season, Smithfield is hosting an eating contest at various Sprint Cup races with the winners receiving trips to future NASCAR races. I was invited to attend the Whole Hog Challenge at the Coke Zero 400 in Daytona, and the highlight of my visit was meeting the king himself, Richard Petty! It was a soggy day in Daytona for the Coke Zero 400, but that didn’t stop contestants of the Whole Hog Challenge from polishing off their plates of ribs. The winner of the Daytona contest, which was officiated by Aric A, won a trip to Homestead in November to compete against other qualifying winners for a chance to win a trip to the Daytona 500 to kick off the 2016 season. If you plan to attend any of the following Sprint Cup races, be sure to look for the Smithfield stage and apply for your spot in the Whole Hog Challenge:

After the Whole Hog Challenge I was invited to join the 43 team for dinner. Fueling the 43 team up before the big race Chef Justin Leo, from American Q, prepared a Smithfield buffet that included ribs (of course), CCC stuffed peppers, bacon macaroni and cheese and corn bread pudding. Oh my yum! The team gobbled up several racks of Smithfield ribs, and Chef Justin Leo was nice enough to share the rib recipe. So even if you can’t make it out to a Whole Hog Challenge yourself, you can enjoy the good eats at home! 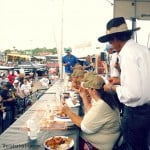 NASCAR fans know that the Coke Zero 400 had a late start due to the rain, but there is plenty to see and do at Sprint Cup races to keep fans entertained. Including this little piggy golf cart making its way though the crowd announcing its arrival with snorts and grunts. Thanks to Smithfield and the 43 team for inviting me to be part of their big day. Good luck to Aric A throughout the rest of the season, we will be rooting for the team that is fueled by bacon.