I really don’t know how most people get through the day dealing with technology. I am spoiled having a techie husband. It’s like having your own live-in Geek Squad. When new electronics arrive, I hand them off to my husband who does his magic and things just work. My husband will be one of the first to admit that Wi-Fi routers are typically a pain, and I have seen him help our family and numerous friends with their routers over the years.

Securifi wants to change this, and has introduced the world’s first touch-screen wireless router and range extender – the Almond. Besides its standard features such as support for wireless 802.11b, 802.11g, 802.11n, 2 built-in antennas, and 2 LAN & 1 WAN ports, the touch screen is what makes this router truly unique. The 2.8″ touch screen allows you to set it up, make changes and view settings without ever using a computer. When it arrived in the mail my husband immediately commandeered the new “toy” and gave it a test drive. Since we already have a wireless network up and running (two in fact), he decided to try it out as a range extender.

Don’t know what that is? Neither did I, but hubs was quick to explain. If you don’t get a strong wireless signal throughout your entire house, a range extender can act as a bridge between your existing wireless network, and create an additional wireless network to give you a stronger signal throughout your home. (Got it?) Initially he actually ran into a problem when trying to set up the Almond. When you are married to a paranoid techy, passwords are uber complicated and one of the special keyboard characters (a # sign) in our password was not an option on the Almond’s onscreen keyboard. (Oopse!) Since their tech support was closed (it was Saturday) he sent an email about the problem and got a response on Sunday acknowledging the problem and providing a work around . They also promised an upcoming software update to fix the bug, which came through a few days later. Even my husband was impressed with the customer service. Now the real test was for a non-techy to give the Almond a try, so my husband reset the Almond back to its factory defaults and handed it over. I’m happy to report it really was simple to get setup and running. After powering the Almond on, you’re presented with an option to choose your language. Then it shows you where the included stylus is stored under the device, which makes using the touch screen easier. You then indicate whether you want to set up the device as a router or range extender, plugin your network cable as the picture on the screen shows and, after it automatically determines your Internet connection type, setup is complete. Click the security icon on the screen to see the random network name and password assigned during setup, and you are ready to connect your laptop, iPad or other wireless devices to your secure wireless network.

The touch screen on the Almond makes this a unique device and absolutely makes it easy to set up, even for the non-technical crowd. It’s currently available from Amazon for $79.00 with free shipping. Since it gets both a techy and non-techy seal of approval, it would make a great gift this holiday season! 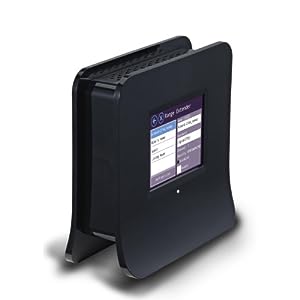 Disclosure – I was provided a device to facilitate this review, however, all thoughts and opinions are my own.