John Carter is a story that brings two unlikely worlds together — Earth, during the Civil War, and Mars, also known as Barsoom in the film. It seems fantastical, and it is, but it also makes for a great action film that brings with it some really cool creatures and wild 3D action. 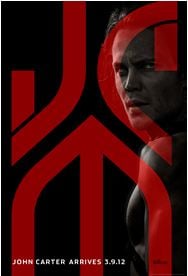 I didn’t know much (anything really) about John Carter, when I brought it over to watch with my family. But after a little Wiki search, we all were surprised to learn that the story of John Carter was written by Edgar Rice Burroughs (I admit I totally was out of the loop on this film). If that name doesn’t ring a bell, perhaps this will — Tarzan. Yes, the author of Tarzan also penned the John Cater series. In fact, Disney’s movie version is based on the first of 11 novels (“A Princess of Mars”) about  interplanetary hero John Carter. And if my dad get his wish, there will be 11 more movies to come. (He and my husband were totally into the movie – totally!)

The movie was a total hit with my dad, who can’t wait to come over to watch it again in 3D at our house. After watching the movie in the traditional format with my family, I decided I needed to check out a few scenes in 3D when I got home. While the kids were napping, I popped in the movie and found myself memorized by the action. Man, Mars is cool in 3D!

Frankly, it wasn’t my favorite movie. To me it was – ok. Nonetheless, I am a movie junkie and was happy to check out something a bit different. While it wouldn’t be my pick for date night, it was an enjoyable movie that I was happy to watch with the family on the couch.

In other words, even if this isn’t your genre of films it would make a great gift for your hubby (think Father’s Day). You’ll score points when you watch it with him, and between us you’ll secretly enjoy it too. Just make sure you are paying attention at the beginning of the movie as a lot of names are thrown at you all at once, after that it gets easier to follow.

Back to Edgar Rice Burroughs. As you watch the movie, you have to be in awe of the fact that the story was written nearly 100 years ago. In fact, movies like Star Wars, Avatar and others were inspired by Burroughs’ stories, and that’s pretty cool.

As a warrior lost on Earth, John Carter is magically transported to Mars, where the fate of the planet and its people ultimately rest in his hands. With surprising new powers, and epic battles, he rises to become the man he is meant to be and the hero he truly is.

From Academy Award®-winning filmmaker Andrew Stanton John Carter is a sweeping action-adventure set on the mysterious and exotic planet of Barsoom (Mars). John Carter is a war-weary, former military captain who’s inexplicably transported to Mars and reluctantly becomes embroiled in an epic conflict. It’s a world on the brink of collapse, and Carter rediscovers his humanity when he realizes the survival of Barsoom and its people rests in his hands. Stunning special effects, great characters and villains — and complete with extraordinary bonus features — John Carter is a heroic and inspirational adventure that will thrill audiences beyond imagination.

Check out the trailer:

Disclosure – I was provided a copy of this film to facilitate this review, however, all thoughts and opinions are my own.