This is a sponsored post, but the Nevermoor review is our own.

Last month, K had the opportunity to read Nevermoor: The Trials of Morrigan Crow before it was released. She adored the book, and couldn’t stop talking about it. So I was excited to when I was asked to review the book on my blog with a giveaway because I knew it would be fun for her. So, this is her first book review shared on my site. 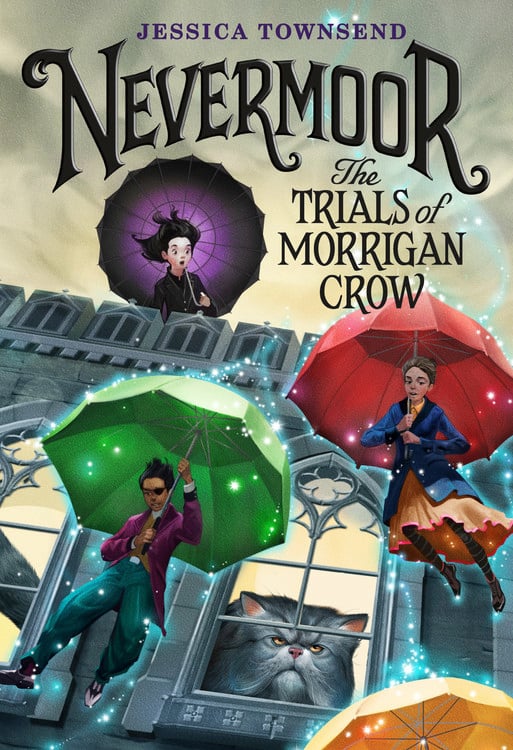 Nevermore is a middle-grade book filled with magic, friendship and fantasy. Regularly compared to Harry Potter, K agrees that fans of the Wizarding World are sure to enjoy this book. She enjoyed the book so much that she was asked by her teacher to give a short report to the class about the book and has a list five names deep of friends who want to borrow her copy next – including her 4th grade teacher.

This is my nine-year-old daughter’s Nevermoor review, in her own words:

This book is so amazing! This is about a girl named Morrigan Crow who is doomed to die on her 11th birthday. But then a guy named Jupiter North comes and brings her to Nevermoor skipping death. There she competes in trials to become a member of the Wundrous Society and is supposed to have a knack or some sort of talent but she doesn’t think she does. While staying there she lives at Nervermoor’s famous Hotel Deucalion run by Jupiter himself. There she meets Jack, Martha, Fen, and lots more! As the different trials come nearer Morrigan is worried is she won’t make it. But when she meets Hawthorne she realizes that she needs to just remember she can do it. I think this book would be a great movie, and I hope one day there is a sequel to Nevermoor because I think it would be a great series. I really like the characters, the storyline and the magic. I recommend this to anyone who likes magic, friendship, fantasy, and much more!

K is the family bookworm. She never goes anywhere without a book in her hand, in the car, on the bus, in school, in bed… She devours books, so I am always in search of the next book for her. Over the summer, I discovered DOGO books, which is a website of kids book reviews written by kids. She joined the Summer Reading Program and has been happily reviewing books ever since. DOGO books was her first introduction to Nevermoor, and her review first appeared there.

She talked about this book so much that I want to read the book next. Because K loves to discuss books as she reads them, I recently subscribed to Audible. This allows me to listen to books the books she is reading while I drive so we can talk about them in great detail. Nevermoor is next on my books to listen to.

Jessica Townsend, you have a big fan in my house. She desperately wants to know what happens next to Morrigan and all of her friends, so she hopes a sequel is in the works soon. Of course, she also keeps insisting that it will be the next big movie. So, fingers crossed.

A breathtaking, enchanting new series by debut author Jessica Townsend, about a cursed girl who escapes death and finds herself in a magical world–but is then tested beyond her wildest imagination

Morrigan Crow is cursed. Having been born on Eventide, the unluckiest day for any child to be born, she’s blamed for all local misfortunes, from hailstorms to heart attacks–and, worst of all, the curse means that Morrigan is doomed to die a midnight on her eleventh birthday.

But as Morrigan awaits her fate, a strange and remarkable man named Jupiter North appears. Chased by black-smoke hounds and shadowy hunters on horseback, he whisks her away into the safety of a secret, magical city called Nevermoor.

It’s then that Morrigan discovers Jupiter has chosen her to contend for a place in the city’s most prestigious organization: the Wundrous Society. In order to join, she must compete in four difficult and dangerous trials against hundreds of other children, each boasting an extraordinary talent that sets them apart–an extraordinary talent that Morrigan insists she does not have. To stay in the safety of Nevermoor for good, Morrigan will need to find a way to pass the tests–or she’ll have to leave the city to confront her deadly fate.

Perfect for fans of the Harry Potter series and Neil Gaiman, this fast-paced plot and imaginative world has a fresh new take on magic that will appeal to a new generation of readers.

One lucky reader will win a Nevermoor prize pack including a copy of Nevermoor: The Trials of Morrigan Crow, branded lapel pin plus Hotel Deucalion pen and notebook and a $50 AMEX gift card to have a wundrous holiday season. 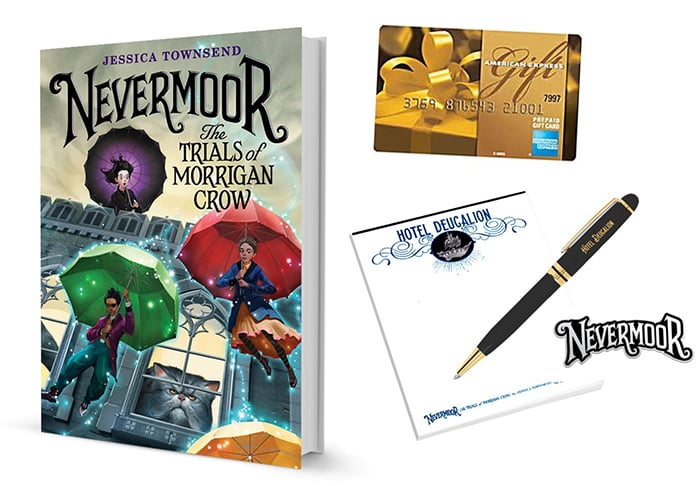