There has been someone in our house sick every day since Thanksgiving. No, seriously, every day. We’ve had multiple rounds of colds with each of the kids getting sick over and over. Not a good way to spend the holidays. With the exception of a visit to the dentist (yeay, fun!), I have not left the house in nearly a week.

So what is a family to do when they are stuck at home, inside for days and days feeling crummy — movies! Luckily, I had a fresh stash of Disney movies at my disposal to keep the whole family entertained (at least for a couple of days).

Finding Nemo is a regular request in our house, especially on beach trips. But even though there was nothing new to the movie, watching it in 3D was a highlight for my four year old. (She is totally obsessed with 3D.) In fact, she was quite disappointed when we had to finish watching the movie in non 3D because baby sister woke up and wanted to watch too. No expensive 3D glasses for a one year old!

Finding Nemo is one of those movies that is truly beautiful even in the standard format and adding the element of 3D only enhances the movies spectacular imagery. If you are 3D capable, this is a movie you have to see in 3D.

Bonus Feature – We were really excited about the 3D HD Aquariums included. (Yes, we are dorks.) But we didn’t think about the fact that to enjoy the 3D Aquariums you have to watch with 3D glasses (duh!). We enjoyed checking out each of the seven difference aquariums (all scenes from the movie), but after a minute or two of each we were done. I think we all thought it would make a cool new screen saver for the TV – if it wasn’t 3D. (BTW – there is a non 3D one included on the Blu-Ray, but only one scene.) 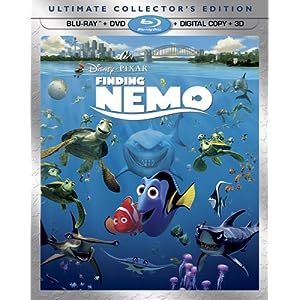 I love this story. It is just such a nice, heart-warming movie. It makes me smile every time I see it. While not as visually impressive as Finding Nemo in 3D the balloons in 3D are a really neat effect. And, as I mentioned before 3D is a favorite novelty for my daughter, who would watch everything in 3D if she could.

The uplifting story of “Up” follows a 78-year-old balloon salesman, Carl, who finally fulfills his lifelong dream of a great adventure when he ties thousands of balloons to his house and files away to the wilds of South America. But he discovers all too late that his biggest nightmare has stowed away on the trip: an overly optimistic 8-year-old Wilderness Explorer named Russel. Their journey to a lost world, where they encounter some strange  exotic and surprising characters, is filled with hilarity, emotion and wildly imaginative adventure.

Favorite Up moment — discovering Kevin is a girl.

Bonus Features – Our favorite bonus features are the short films Partly Cloudy and Dug’s Space Mission. Partly Cloudy preceded the original theatrical release of the movie, but since it came out before my daughter was born this was the first time we saw it. It is a cute short about where babies come from – they come from storks, of course, but where do the storks get the babies? Want more of the talking dog Dug? Then Dug’s Space Mission is the answer. Both are fun additions to the movie. 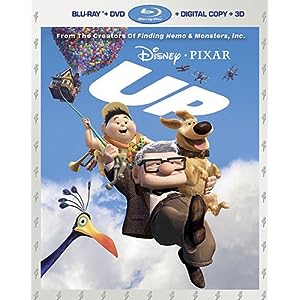 We are well-versed in all things Disney Princess in this house, but while we already owned a copy of Cinderella II somehow we missed Cinderella III. K was thrilled to learn that there was a new Princess movie, new to her anyway. If you have a little princess in your house, this combo is a must!

In Cinderella II: Dreams Come True, the princess and her prince are newlyweds and Cinderella quickly learns that her royal responsibilities as a princess are more challenging than she imagined. The 74-minute movie includes three short stories, told by the mice, about how Cinderella learns that being true to herself is what makes her a princess. Because of the individual stories contained within the movie, this is a great movie to watch in small increments if needed.

Cinderella III: A Twist in Time takes a look at what Cinderella’s life would have been like if the glass slipper fit Anastasia. After stealing the Fairy Godmother’s magic wand, Lady Tremaine turns back time and erases the prince’s memory of Cinderella and replaces his true love with Anastasia. An all-new story about how Cinderella and her mice friends must work together to make sure true love triumphs.

My thoughts – Both movies are cute and equally enjoyed by my daughter. They are sequels, so don’t expect all of the magic of an original princess story. But if you are looking to entertain your princess-loving kiddos, both movies will do so magically.

Bonus Features – Ever wish things came with a warning? Well, here’s your warning. The bonus features “Becoming a Princess” 1 and 2 are cute, so cute that they will leave your daughter begging to be transformed into a princess. So much for escaping telling my daughter about the Bibbidi-Bobbidi Boutique – cats outta the bag now. The “Put It Together” music video is cute too. My girls got up and danced. 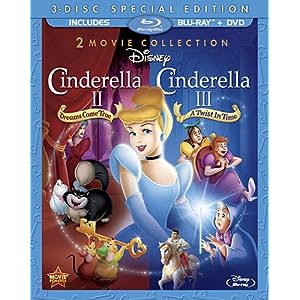 In The Great Mouse Detective, the classic character of Sherlock Holmes is brought to life by Disney as an animated mouse — Basil of Baker Street. This is a re-release of the movie that originally came out when I was a kid (1986), so I was excited to share the movie with my daughter for the first time. Unfortunately for me, apparently it has been on TV before because it wasn’t her first time. Oh well, she still really liked the movie. Although she was a bit afraid of the evil bat (Fidget), she quite enjoyed the story (again).

Since this is an older movie, there are no fancy bells and whistles just a classic Disney story with its heroes out to solve a mystery and save a little girl. Sometimes, that’s all you need. As to how mom liked it — It’s elementary my dear read. (Sorry, couldn’t help myself!)

Bonus Feature – Of course, the favorite included bonus was “The World’s Greatest Criminal Mind” sing-a-long song. Let’s face it anytime my girls can get up and dance, they do! 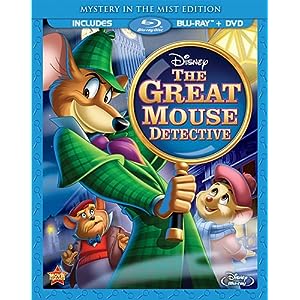 This one isn’t a new release or even a new re-release, but when we were in Boston a couple of months ago we discovered an unopened copy of Mary Poppins on her cousins’ shelf. Since we are seeing the stage production later this month, it was time to break out the borrowed film. This is K’s very first full-length non-animated movie. Guess what? She loves it. (Of course!)

I was so thrilled to sit down on the couch with my girl and share one of my favorite childhood classics. Since I have been singing the songs to her since birth, she was thrilled to see the movie for “A Spoonful of Sugar,” “Let’s Go Fly A Kite,” etc. A little bit of magic, fun songs and a lot of heart makes this a perfect “first movie.” She liked it so much, I think we will have to invest in our own copy when it is time to return the movie!

I am so excited that she is old enough to introduce her to some of my favorite Disney classics. Up next, Bedknobs and Broomsticks.

Favorite moment – The carousel ride because it is my daughter’s all-time favorite ride at Disney and she went nuts!

Options – Mary Poppins is available on a 2-disc DVD set. 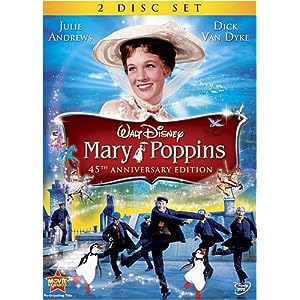 Disclosure – Review copies were provided, however, all thoughts and opinions are my own.