It isn’t Christmas without A Christmas Carol. But while I am a fan of Charles Dickens’ tale, I am partial to kid-friendly versions. A mug of hot cocoa, Christmas tree lights in the background — ’tis the season for family movie night! So what version did we snuggle up with this holiday season? Why The Muppets, of course. 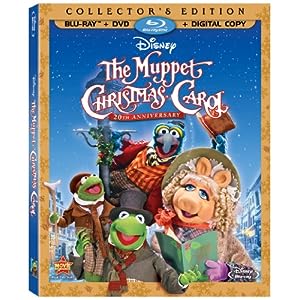 In the Muppet version, the hilarious Gonzo plays the narrator (Charles Dickens) who is accompanied by his sidekick Rizzo the rat. Kermit plays the part of Bob Cratchit and his wife Miss Piggy Mrs. Cratchit.

A note from Gonzo

Greetings, holiday movie fans and lovers of culture. I am Gonzo… or perhaps better known the fans of this classic motion picture as literary legend Charles Dickens. Are you read to laugh, cry, sing, frolic, cavort and enjoy yourself beyond belief? Well, you’re in luck, because this 20th Anniversary Edition of Disney’s “The Muppet Christmas Carol” is guaranteed to put you in the holiday spirit that will stay with you forever — or at least until your Aunt Edna starts complaining that nobody is eating the fruitcake she brought… again!

Available for the first time on Blu-Ray and DVD. The Muppet Christmas Carol includes the following bonus features

A Muppet Christmas Carol is now available and there is still time to get this movie delivered before Christmas. Or rent it on Instant demand tonight from Amazon Instant Video.

In the mean time, enjoy the chickens rendition of Joy to the World.

A movie screener was provided facilitate this review, however, all thoughts and opinions are my own.